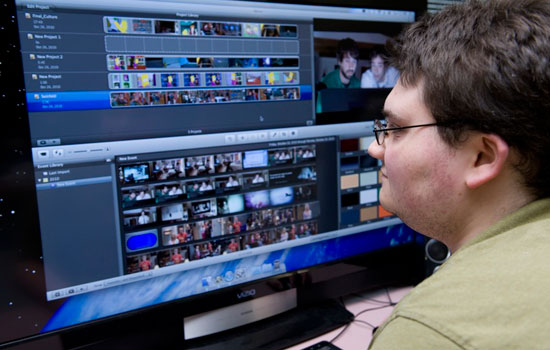 RIT is creating a new university-wide research center devoted to digital media. The Center for Media, Arts, Games, Interaction and Creativity (MAGIC) will be led by Professor Andrew Phelps. The MAGIC Center will have a research and development laboratory as well as a production studio to bring creations to the marketplace.

Rochester Institute of Technology is creating a new university research center devoted to the burgeoning field of digital media. The Center for Media, Arts, Games, Interaction and Creativity (MAGIC) will provide a broad range of research, development, education and entrepreneurial activities in support of the exploration of media, arts, games, social interaction and digital creativity.

The MAGIC Center will be composed of two parts: 1) A university-wide research and development laboratory; and 2) MAGIC Studios, a production studio that will assist in efforts to bring digital media creations up to marketplace standards and commercialized.

“Digital media is changing the way we communicate, the way we learn, and even the way we think,” says RIT President Bill Destler. “Through a wide variety of mechanisms, including traditional and non-traditional research programs, artistic production and experimentation, entrepreneurial activities and corporate and governmental partnerships, the MAGIC Center will act as a collaborative home for the exploration and production of digital media by the RIT academic community.”

Digital media is content in the form of text, graphics, video and audio that can be transmitted over the Internet or computer networks. An area for the new center to address, for example, would be the development of mobile apps.

Destler appointed Professor Andrew Phelps to be the founding director of the new initiative. Phelps previously founded and led RIT’s School of Interactive Games & Media in the B. Thomas Golisano College of Computing and Information Sciences. He also is the originator of the Game Design and Development programs at the university.

“The RIT community engages and motivates our students through the building of digital media and artifacts, and this activity is directly at the core of the MAGIC Center,” says Phelps. “Our vision is for the MAGIC Center to lead higher education in the exploration, experimentation, artistic practice and deployment of interactive and social media.”

Destler and Phelps noted that there is a variety of fields impacted by advances in digital media and the list keeps growing. This includes health and science simulations, economic simulations, social software, free and open source software, games and learning, mobile technologies and other areas in the digital humanities. “We have high hopes for the MAGIC Center and its mission to broadly integrate the study of digital media and technology with the university at large,” says Destler.

The combination of a research lab and a corporate-style production studio makes the new center unique in higher education, says Jeremy Haefner, provost and senior vice president of academic affairs.

“Our students come to us, and some of them want to create their own companies,” says Haefner. “Some want to create individual products but aren’t thinking about companies. Others want to do unique, innovative work while they are in school, and see college as a primary ‘experimentation phase’ prior to moving on to other endeavors. The new MAGIC Center is designed, through its inclusion of both MAGIC Labs and MAGIC Studios, to address these needs and work with students in a wide variety of situations and with a myriad of motivations.”

RIT students, for example, would have the potential to be involved with intellectual property negotiations and profit sharing.

“The inclusion of MAGIC Studios is a unique and defining element,” adds Ryne Raffaelle, vice president for research and associate provost. “While many university research centers stop at the proof-of-concept stage, RIT will have the ability to continue down the path toward public distribution – either by incubating the project in MAGIC Studios, through the formation of a spin-off company, or by contributing the work to the open source community as appropriate.”

The new center builds on the legacy of success established by the B. Thomas Golisano College of Computing and Information Sciences as an innovator in computing and digital media, noted Andrew Sears, dean of the college. “We offered the first bachelor’s degrees in the United States in software engineering, information technology, and networking and systems administration. In addition, we created one of the first new media programs and one of the first game design and development programs,” says Sears. “The new center is, likewise, one of the very first of its kind in higher education.”