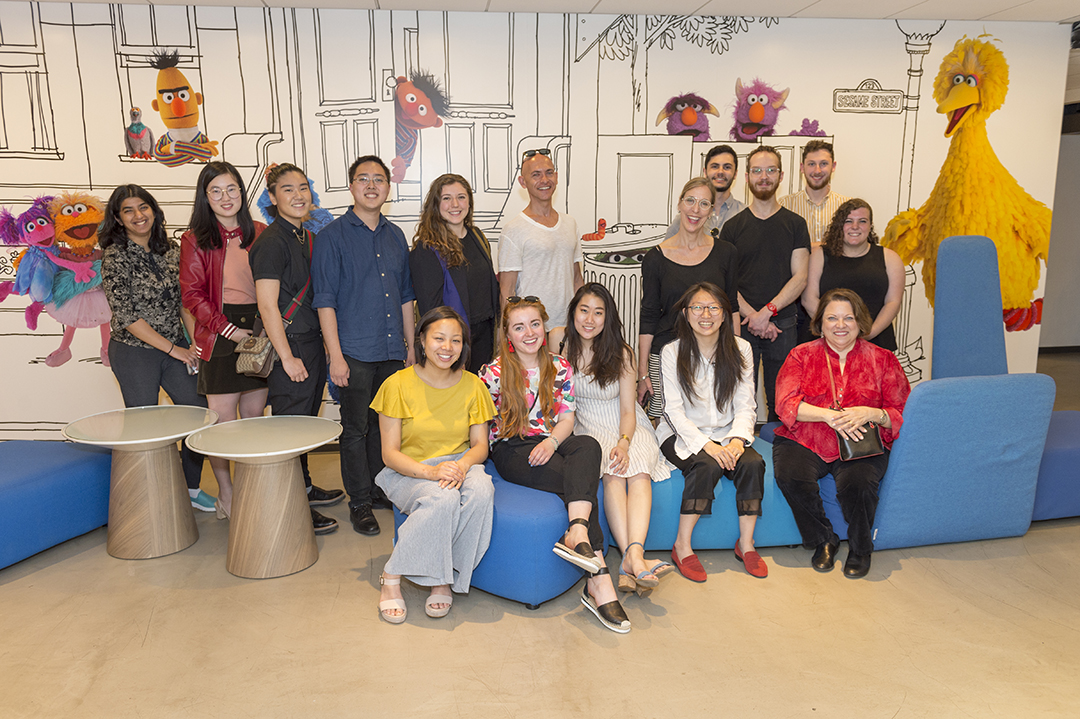 Industrial design (BFA) students at Rochester Institute of Technology found their way to Sesame Street as they celebrated the culmination of a thrilling collaboration with the widely beloved brand.

Students spent the fall 2018 semester working with Sesame Workshop, the nonprofit education organization behind Sesame Street, to design modern products around the theme of “Urgency of Play.” It was for the industrial design program’s annual Metaproject — an annual studio course that pairs students with an industry partner.

The output from the Metaproject 09 class was exhibited at Sesame Workshop’s New York City headquarters on May 18 as part of an event during NYCxDESIGN — the Big Apple’s annual celebration of design that attracts people from all over the world. As all 15 students’ projects were displayed, event attendees included RIT students, faculty, staff and alumni, as well as design professionals (“I looked at the guest list — there are industry legends,” one student said).

“They delivered a wide range of objects at play,” said Theresa Fitzgerald ’84 (graphic design), the vice president of brand creative at Sesame Workshop who worked with the students and provided feedback along the way. “They’re not what you see when you walk down a toy aisle. We were looking to engage play at a higher level. … (The products) were professionally developed and they thought with the user experience.”

In a digitally driven, busy society, the products channeled the fundamental nature of play, and the value of it. They focused on addressing a loss of connectivity and “exploring the haptic, analog qualities of play and corresponding tools that can be employed to facilitate impactful playful behavior,” said Josh Owen, Metaproject founder.

Here are some reactions about the experience: from going through the class to the final showcase on a grand stage.

“The urgent specificity of the projects that Sesame Workshop has been involved in globally became the jumping-off point for students. We asked each student to pursue research areas closely connected to the brand and to their own interests. That research in turn cultivated the opportunities for innovation that came later.”

“(Before the exhibit) Theresa took the students through the creative department at Sesame Street. That is something they’ll remember the rest of their lives. The impact of being able to work with industry and see first-hand what it’s like to be in a creative space is phenomenal.

“One of the ways our students can get realistic experience and understand what’s going on in the real world is to have these close partnerships,” she added.

“I was super impressed by the class that Josh runs. The level of talent, the rigor and discipline — it’s something I know I got at RIT. So every time I checked in, the students hit their mark.”

“There is a problem of kids don’t play, they don’t explore, they don’t feel the way they used to. So our responsibility as designers isn’t just to produce products, it’s to create social change and good. My solution to that was to say, ‘The world that I want to live in is one where kids will go off into the world being ready and willing to take time out of their day and take care of birds.’ That’s a very simple, wholesome goal. Solving that through a product was the greatest challenge, but also so rewarding.”

Sumin-Petal Oh, student creator of the “Cloud Sweeper,” a series of umbrellas, each with an abstract Sesame Street character design. Her design won the Brand Award.

“Theresa mentioned that if Sesame Street had the funds to produce products, they would have loved to produce mine for the 50th anniversary. It meant a lot to me as an industrial designer to develop a product that is worthy of mass production.

“It’s unbelievable because I never imagined that I could ever step my foot into Sesame Street’s headquarters,” she added. “It means a lot that my work and 14 other classmates’ work is displayed there, especially during Design Week. It’s like your first introduction to the world as a new graduate.”

Daniel Shapiro, student creator of the “Make and Move Riding Toy,” a modular bike that grows along with the child user. His design won first place.

“Working under Josh and Lorraine — these very well-known, very respected designers in the field — was almost like being at a design firm, being under their instruction and working with the client in Theresa. It was a great real-world experience, seeing what’s expected from a client.

“This is an extraordinary experience to be part of Design Week. To be in the Sesame Workshop headquarters and see where they produce their work and to exhibit in it is incredible.”