More than 570 eclectic performances and displays planned Sept. 10-21 in Rochester 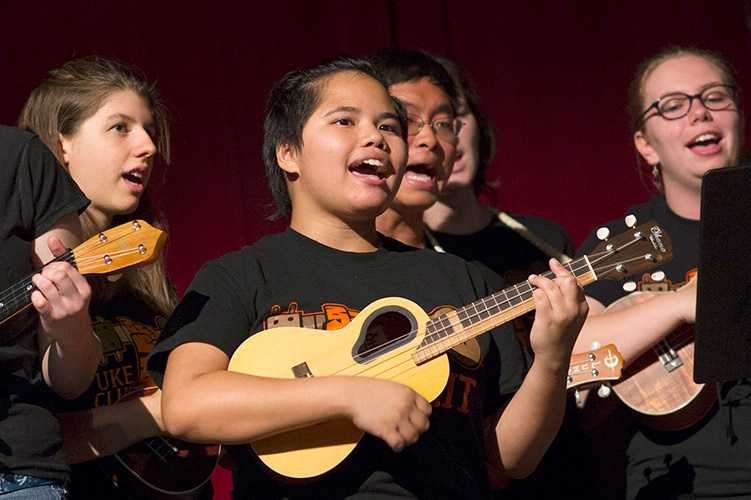 Members of the RIT Ukulele Club perform at a previous Fringe Festival in downtown Rochester.

Free shuttlebus service to and from campus is once again being provided for Rochester Institute of Technology students wanting to attend the weekend events at the KeyBank Rochester Fringe Festival, which begins Tuesday and continues through Sept. 21 in downtown Rochester.

RIT students, faculty, staff and Osher members are part of the 12-day lineup of more than 570 eclectic performances during the festival.

RIT also is a major educational sponsor of the community collaborative event, now in its eighth year. The festival is a celebration of the performing and visual arts in more than 30 venues in downtown Rochester, featuring world-renowned performers as well as up-and-comers. More than 78,000 people attended last year’s festival.

More than 150 of the festival events are free, including all of the 35 RIT performances and exhibits, most of which will be held at the Little Theatre #5 and Café, 240 East Ave.

“The arts bring people together, and there is nothing better than seeing the city streets filled with people from all parts of our community, as well as visitors from far and wide, enjoying all kinds of performances in a wide range of venues,” said Deborah Stendardi, RIT’s vice president for Government and Community Relations.

RIT student Garegin Grigoryan, a Ph.D. student from Moscow, Russia, signed up to perform songs on the piano by Billy Joel, Elton John, Paul McCartney, Ray Charles and pop music from Queen and Lionel Richie during this year’s festival.

“I just want to perform for an audience,” he said. “It will help me be more confident at research conferences as well.”

The RIT offerings at this year’s Fringe Festival include (* denotes interpreted):

For a complete schedule of RIT Fringe events (and notations on interpreted performances) as well as the shuttle schedule to and from RIT, go to www.rit.edu/fringefest or contact RIT Assistant Vice President of Special Events Lynn Rowoth at 585-475-7408 or lynn.rowoth@rit.edu.