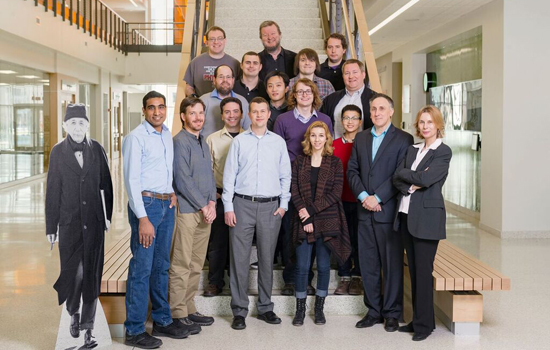 Research at the Center for Computational Relativity and Gravitation at Rochester Institute of Technology explores extreme astrophysical phenomena through Albert Einstein’s general theory of relativity. Several members of the center contributed research to the LIGO Scientific Collaboration that helped confirm Einstein’s prediction of the existence of gravitational waves. Members of the center include, left to right in the front row, Jam Sadiq, John Whelan, Jason Nordhaus, Monica Rizzo, Carlos Lousto and Manuela Campanelli, director; in the second row, Joshua Faber, Brennan Ireland and Naixin (Chris) Kang; in the third row, Yosef Zlochower, Yuanhao (Harry) Zhang and Richard O’Shaughnessy; in the fourth row, Dennis Bowen and Jake Lange; and in the fifth row, Zachary Silberman, Hans-Peter Bischof and James Healy.

Six Rochester Institute of Technology researchers are among the authors of a paper announcing what may be the most important scientific discovery in a century—findings that confirm the existence of gravitational waves predicted in Albert Einstein’s general theory of relativity.

For the first time, scientists have observed ripples in the fabric of spacetime called gravitational waves, arriving at the Earth from a cataclysmic event in the distant universe. This confirms a major prediction of Albert Einstein’s 1915 general theory of relativity and opens an unprecedented new window onto the cosmos.

Gravitational waves carry information about their dramatic origins and about the nature of gravity that cannot otherwise be obtained. Physicists have concluded that the detected gravitational waves were produced during the final fraction of a second of the merger of two black holes to produce a single, more massive spinning black hole. This collision of two black holes had been predicted but never observed.

The gravitational waves were detected on Sept. 14, 2015, at 5:51 a.m. Eastern Daylight Time (9:51 UTC) by both of the twin Laser Interferometer Gravitational-wave Observatory (LIGO) detectors, located in Livingston, La., and Hanford, Wash. The LIGO Observatories are funded by the National Science Foundation and were conceived, built, and are operated by Caltech and Massachusetts Institute of Technology. The discovery, accepted for publication in the journal Physical Review Letters, was made by the LIGO Scientific Collaboration (which includes the GEO Collaboration and the Australian Consortium for Interferometric Gravitational Astronomy) and the Virgo Collaboration using data from the two LIGO detectors.

RIT President Bill Destler lauded the team for its role in this scientific revelation.

“This is a historic day in science, and RIT is thrilled that our researchers played such an important role in this collaboration's profound discovery,” Destler said. “Their commitment to their field and to their research exemplifies what we set out to do at RIT. We are delighted that our university has been able to facilitate their work and look forward to supporting them as they continue their research.”

The LIGO paper prominently cites 2005 landmark research done by Campanelli and her team on binary black hole mergers. Based on this milestone work, Lousto and Healy numerically modeled the merger of a pair of black holes and simulated gravitational waveforms that match the one which LIGO detected.

Campanelli’s team was one of the first to solve Einstein’s strong field equations describing the inspiral, merger and ringdown of binary black hole systems—and simulate colliding black holes on a supercomputer. Her collaborators were Lousto and Yosef Zlochower, an associate professor in RIT’s School of Mathematical Sciences, and Pedro Marronetti, program director of the division of gravitational physics at the National Science Foundation.

Hans-Peter Bischof, RIT professor of computer science and a member of the center and the LIGO Scientific Collaboration, has produced scientific visualizations of their seminal research and subsequent work.

“The LIGO announcement is both a historical and a very emotional moment in science, especially for us, since our research contributed to the identification of the first gravitational wave observation as a binary black hole merger,” Campanelli said.

“This discovery kicks off the field of gravitational wave astronomy,” said Whelan, principal investigator of RIT’s group in the collaboration. “For the first time, we’ve observed the universe through the new window opened up by Advanced LIGO.”

O’Shaughnessy’s research connects the gravitational-wave signatures observed by LIGO to the astrophysical sources that produced them. He estimates both the nature of these sources—in this case, a binary black hole—and how they formed.

O’Shaughnessy works closely with Lousto and Healy, who use supercomputers to produce accurate numerical simulations of binary black hole systems like the one detected by LIGO.

“It is incredibly exciting to see that our predictions for the merger of two black holes have been so neatly verified by direct observation,” Lousto said.

Black holes are massive stars that have collapsed into compact objects whose gravity is too strong for light to escape. Collisions of black holes produce gravitational waves that ripple through space at the speed of light.

The detection of the first gravitational wave follows the centennial celebration in 2015 of Einstein’s general theory of relativity, which predicted the existence of these waves. They result from strongly gravitating masses like black hole mergers, highly spinning neutron stars and stellar explosions—and from the Big Bang.

Although these waves carry extreme amounts of energy, they couple weakly to matter, and only highly sensitive detectors like LIGO can observe them. Analysis of the shape of gravitational waves can reveal information about the systems that generated them.

The LIGO Scientific Collaboration’s detector network includes the LIGO interferometers and the GEO600 detector. The GEO team includes scientists at the Max Planck Institute for Gravitational Physics (Albert Einstein Institute, AEI), Leibniz Universität Hannover, along with partners at the University of Glasgow, Cardiff University, the University of Birmingham, other universities in the United Kingdom, and the University of the Balearic Islands in Spain.

Virgo research is carried out by the Virgo Collaboration, consisting of more than 250 physicists and engineers belonging to 19 different European research groups: six from Centre National de la Recherche Scientifique (CNRS) in France; eight from the Istituto Nazionale di Fisica Nucleare (INFN) in Italy; two in the Netherlands with Nikhef; the Wigner RCP in Hungary; the POLGRAW group in Poland and the European Gravitational Observatory (EGO), the laboratory hosting the Virgo detector near Pisa in Italy.

The discovery was made possible by the enhanced capabilities of Advanced LIGO, a major upgrade that increases the sensitivity of the instruments compared to the first generation LIGO detectors, enabling a large increase in the volume of the universe probed—and the discovery of gravitational waves during its first observation run.

The U.S. National Science Foundation leads in financial support for Advanced LIGO. Funding organizations in Germany (Max Planck Society), the U.K. (Science and Technology Facilities Council, STFC) and Australia (Australian Research Council) also have made significant commitments to the project. Several of the key technologies that made Advanced LIGO so much more sensitive have been developed and tested by the German UK GEO collaboration.