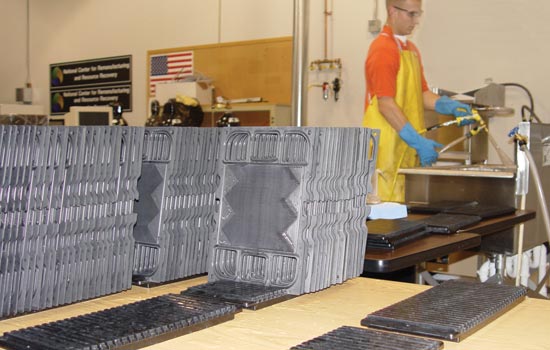 A student cleans components for fuel cells as part of a green cleaning project at RIT. The university’s efforts in clean-technology development will be one of several components of the new Pollution Prevention Institute.

Through a recently announced New York state initiative, RIT will play an integral role in the development of technologies and processes designed to prevent pollution. RIT will host the newly created Pollution Prevention Institute, a statewide research and development center that will design and test green manufacturing methods and give technical support to businesses to reduce pollution.

As it assists industry, the institute will help clean the environment by decreasing the use of toxic chemicals, cutting waste generation, decreasing exposure risks to workers and promoting more efficient use of raw materials and energy. Center activities will include the identification and implementation of practical prevention methods, cost-effective equipment and safe materials, the development of professional education and training programs and the creation of a communications pipeline for technical assistance.

The New York State Department of Environmental Conservation received and evaluated proposals from various universities across the state to host the institute. After an extensive peer-review process, a technical committee unanimously selected RIT, noting that its proposal was bolstered by solid agreements with other New York universities and regional technology centers to build a research-sharing network.

“RIT has the hands-on experience of bringing the theoretical into real-world application and this will put New York at the forefront of a new environmental model,’’ says Department of Environmental Conservation Commissioner Pete Grannis.

“This award is a significant achievement for the university, and the team in the Golisano Institute is to be commended for its successful efforts in winning this very competitive grant,” says Don Boyd, RIT vice president for research.

State officials called for the development of a statewide pollution prevention center last year. This followed a 2003 report by the New York State Assembly, which found that a lack of a focused research-and-development center and on-site technical assistance for businesses was a major shortcoming in current state pollution-prevention activities. The State Legislature has approved $2 million in assistance to launch the institute and state leaders called for another $4 million to be allocated to the center in the 2008-2009 proposed executive budget.

“Studies show that the creation of a research center that can tap into the technical knowledge and skill sets of academic institutions, government agencies and not-for-profit organizations can be helpful in enhancing pollution-prevention efforts,” notes Nabil Nasr, director of the Golisano Institute for Sustainability, where the institute will be housed. “Through the Pollution Prevention Institute, we hope to create an environment in which new processes and technologies can be easily transferred to industry helping to both cut pollution and enhance efficiency and productivity.”

To enhance knowledge share and collaboration between universities working in the field, RIT will create 16 research and development test beds, or technological laboratories, across the state, through partnerships with Clarkson University, Rensselaer Polytechnic Institute and the State University of New York at Buffalo. RIT also plans on creating partnerships with New York’s 10 regional technology development corporations to help disseminate data, tools and strategy. These groups recently formed a green-sustainability working group to bolster environmental opportunities across the state.