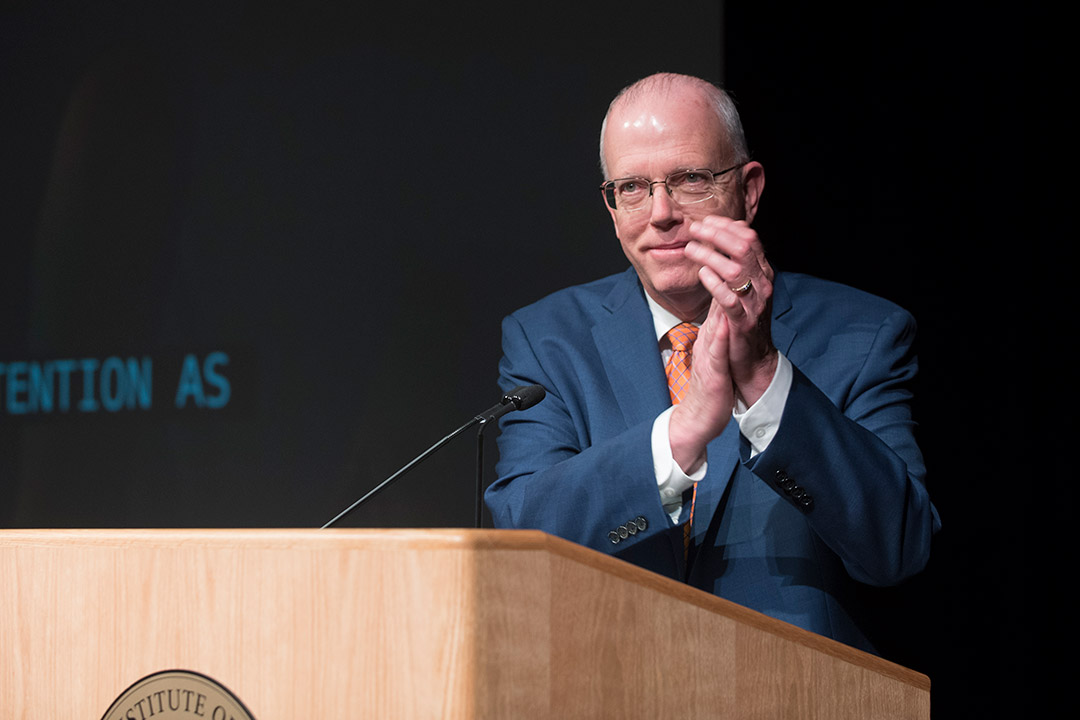 Rochester Institute of Technology President David Munson welcomed the community back for the new academic year Friday saying that the university is positioned for another exciting academic year.

“RIT is always on to something, so let me recap some amazing accomplishments from the past year before we talk about our vision for the future,” he said.

Milestones last year included adopting the 2025 Strategic Plan, which more purposefully focuses on the intersection of technology, the arts and design; the opening of MAGIC Spell Studios; the 50th year of RIT at its Henrietta campus; and the 50th anniversary of RIT’s National Technical Institute for the Deaf.

He said an all-time record 4,200 RIT students graduated in May, pushing a global alumni network to more than 130,000. The graduates included more than 500 from RIT’s international campuses, including the first commencement ceremony in Weihei, China, for students receiving bachelor’s degrees in management information systems.

“By working together, we can ensure that RIT remains a leader in creating the future,” Munson said. “We are thankful to all who have participated and generously provided support to date.”

He said construction is under way on RIT’s state-of-the-art Global Cybersecurity Institute that will be a premier center for cybersecurity education, research and service to corporations and governments. It will provide simulation facilities “to produce highly education and experienced professionals who are positioned to solve the world’s most critical cybersecurity problems, both now and in the future.”

And plans are progressing for the new Innovative Making and Learning Complex, which will connect the Wallace Library and Student Alumni Union. He said it will be the largest construction project, by far, on campus in the last 50 years.

“This new complex will serve as an emblem of RIT, illustrating what we’re all about, both to visitors and to ourselves,” he said. The building design will continue at least to next summer, followed by two years of construction.

A strong supporter of performing arts, Munson said RIT plans to select an architect this fall to design a new performing arts center specifically for musical theater which will help attract faculty and multi-talented students. Funding will be needed to finish the project, but he said such a venue, complete with an orchestra pit and a high ceiling to fly sets, would integrate music, theater, dance and technology.

And a new RIT campus is being built in the Dubai Silicon Oasis, which will feature an innovation and entrepreneurship center and sustainable building processes. The first portion is scheduled to open later this year, and the second phase will open in 2023.

Also looking ahead, Munson said upgrades to our athletic facilities are being studied, including the possibility of building a stadium and adding artificial turf fields.

“My feeling is that we could be better serving our 650 varsity athletes, in 24 sports, and many, many more students in club sports and intramurals,” Munson said.

Munson concluded by thanking students, faculty staff and alumni “for doing your part to move this university forward. We have both challenges and lots of opportunities ahead. I promise it will be an engaging and invigorating journey as we pursue our strategic plan and make our mark on the world. I am honored to be working with you – such an exceptional group of talented faculty, staff and students. Thank you for all you do.”