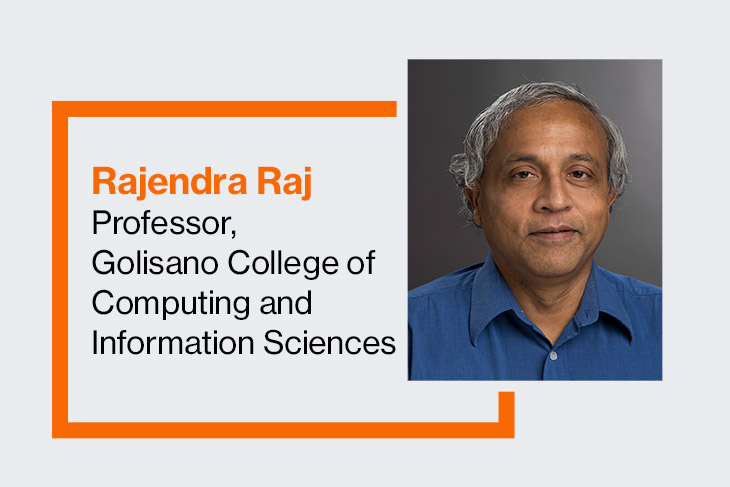 About every 10 years, a joint task force is assembled to establish international curricular guidelines for undergraduate programs in computer science. The group aims to update curriculum to keep it modern and relevant. This is the first time someone from RIT has been selected to co-lead the task force.

The joint task force includes a steering committee of 19 members from organizations representing a diverse set of colleges and universities in the U.S., Brazil, China, Egypt, India, and Ireland. The joint task force includes members from the IEEE Computer Society, the Association for Computing Machinery (ACM) and the Association for the Advancement of Artificial Intelligence (AAAI). This is the first time AAAI will participate in the revision process for computer science curricula.

“We are determining what the next generation of computer science students should be learning, focusing on the breadth of knowledge and skills that computer science graduates need to have, distinguishing themselves from the many specialized computing disciplines,” said Raj. “Artificial intelligence is one of those areas that has become essential to both computer scientists and everyday technology users.”

Raj also hopes to use curriculum changes to create more alternative pathways for students to get into computer science degree programs, making the field more inclusive. While introductory computer science courses are intended for first-year students who don’t already know programming, Raj said that is often not the case. Students come to college with a wide range of skills and that can make it difficult for instructors and students.

“It should be easier for people from diverse backgrounds to enter into the major, regardless of what prerequisites they were able to take in high school,” said Raj. “We need to make the introductory CS courses more accessible to someone who is a good student, but may not know how to code.”

As the IEEE Computer Society co-chair, Raj will lead the multi-year international effort along with ACM co-chair Amruth Kumar, professor of computer science at Ramapo College of New Jersey.

“Raj is a visionary thought leader in computer science education who brings a wealth of experience and leadership to the task force,” said Allen Parrish, professor of computer science at University of Alabama and chair of the IEEE Computer Society Curriculum and Accreditation Committee that selected Raj as co-chair. “His collegial approach will serve him well as a facilitator of the group. He can provide both vision and a steady, yet friendly, hand to provide leadership.”

The task force hopes to release its guidelines in 2024, with drafts for feedback being shared at international conferences throughout the next few years.