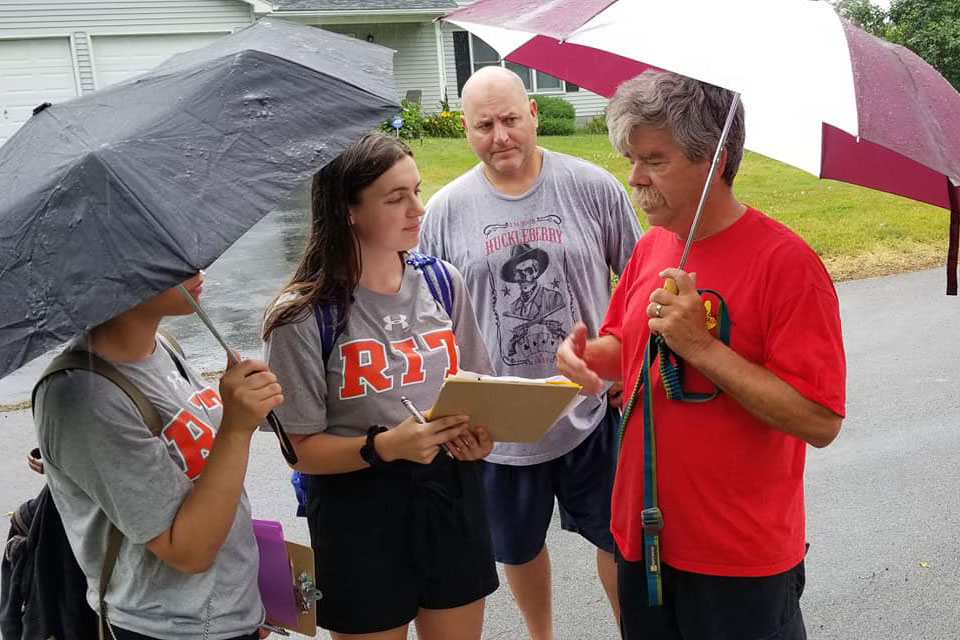 Emily Haberlack, a student from Iowa State University who studied at RIT this summer, surveys lakeshore residents about their perceptions of Lake Ontario flooding.

About 82 percent of Rochester-area lakeshore residents believe that Plan 2014 is to blame for recent flooding along Lake Ontario, according to preliminary data from a new study conducted by summer research students at Rochester Institute of Technology.

The students surveyed about 300 lakeshore residents to learn about their experiences and opinions on Lake Ontario flooding. The group believes that results of the study could provide decision-makers with valuable input on why people think the lake is flooding. 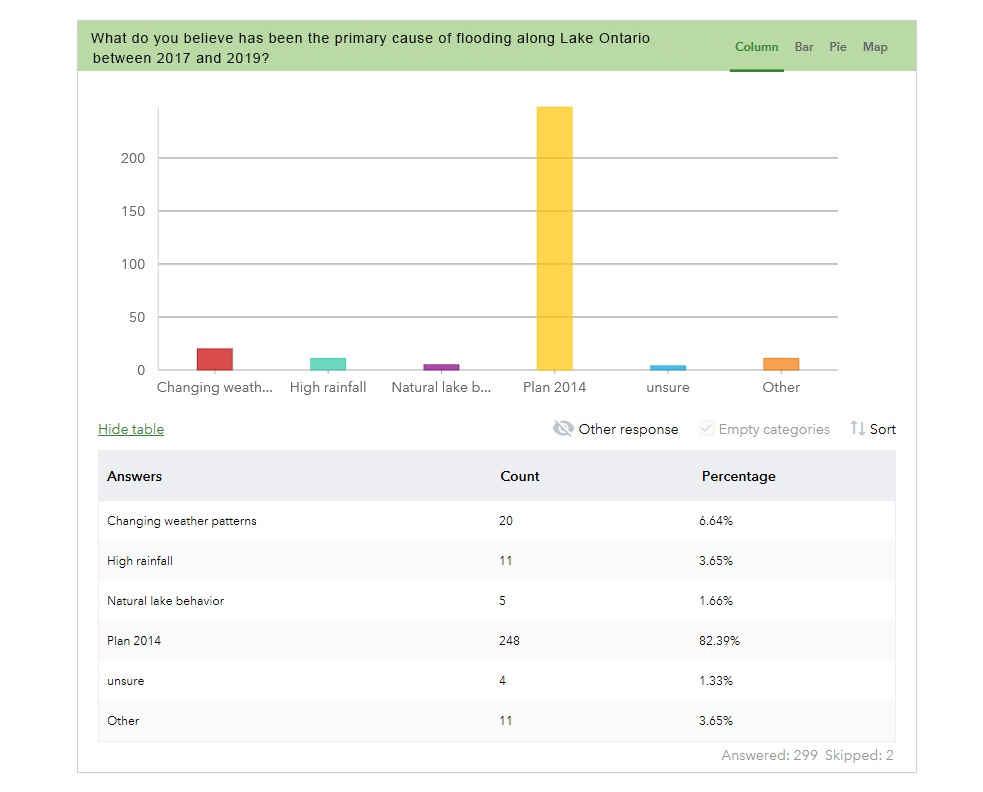 Results for the question, what do you believe has been the primary cause of flooding along Lake Ontario between 2017 and 2019?

“The study results are the first to formally document people’s perceptions of why flooding is occurring, along with demographic information,” said Brian Tomaszewski, associate professor in RIT’s Center for Geographic Information Science and Technology, whose students ran the study. “We assume that most people think Plan 2014 is the reason for flooding, but not all people think this. Knowing this, decision-makers could use our survey results to tailor future messages and communications.”

The student researchers from across the country spent 10 weeks at RIT as part of a summer Research Experience for Undergraduates (REU) funded by the National Science Foundation. The REU focused on geographic information systems for disaster resilience spatial thinking. Tomaszewski — who lives on Lake Ontario — saw an opportunity for his students to conduct a study on a disaster happening right in their backyard.

The study was done in-person and online in July, with institutional review board (IRB) approval. Students collected much of the field data by walking around neighborhoods on the lake and surveying residents. The survey gathered data on income, age, how long they’ve lived on the lake and how people receive their news.

“Overwhelmingly, people on both sides of the political aisle thought that climate change was not a cause of the flooding — they thought it was Plan 2014,” said Erin Mahoney, an REU student from SUNY Binghamton University. “People seemed to focus on the International Joint Commission and national politics, but there was very little blame on local governments.” 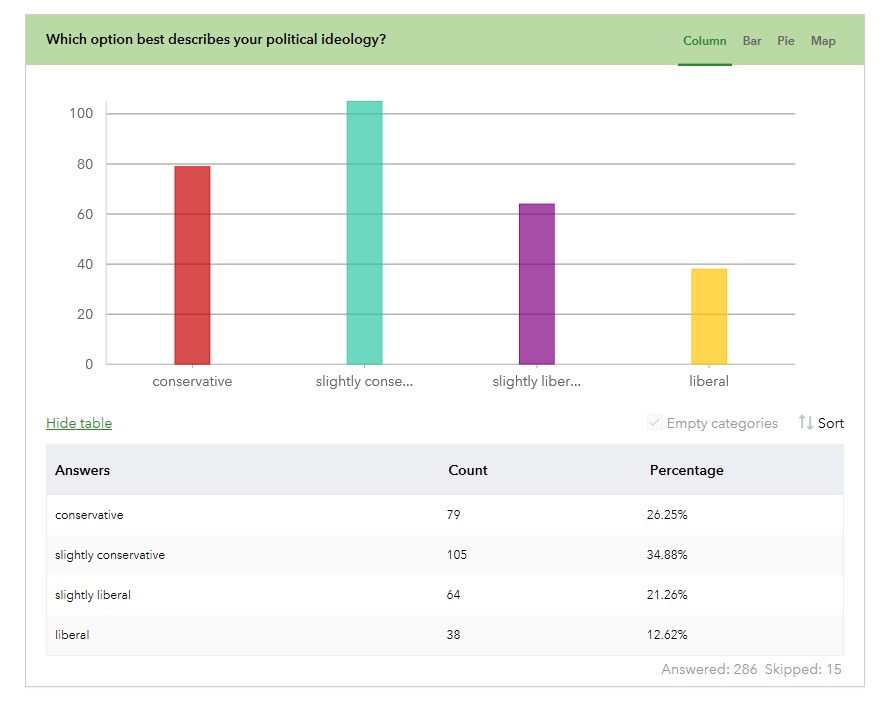 Results for the question, which option best describes your political ideology?

When asked about political ideology, about 61 percent of people described themselves on the conservative-side, while about 34 percent said they leaned liberal. Preliminary findings from the study showed that about 7 percent of people think that changing weather patterns were a cause of flooding, while about 4 percent cite high rainfall.

The survey also asked respondents who they believe is best served by Plan 2014. More than 200 people identified both hydropower plants and commercial navigation and shipping as beneficiaries of the plan.

“It was interesting to build a study and survey from scratch,” said Emma Thomley, an REU student from Carleton College. “We learned a lot about bias questions and how to structure questions so that you don’t influence how people respond.”

In late 2016, the International Joint Commission (IJC) adopted Plan 2014, a joint agreement between the U.S. and Canada to manage the waterway of Lake Ontario and the St. Lawrence River. 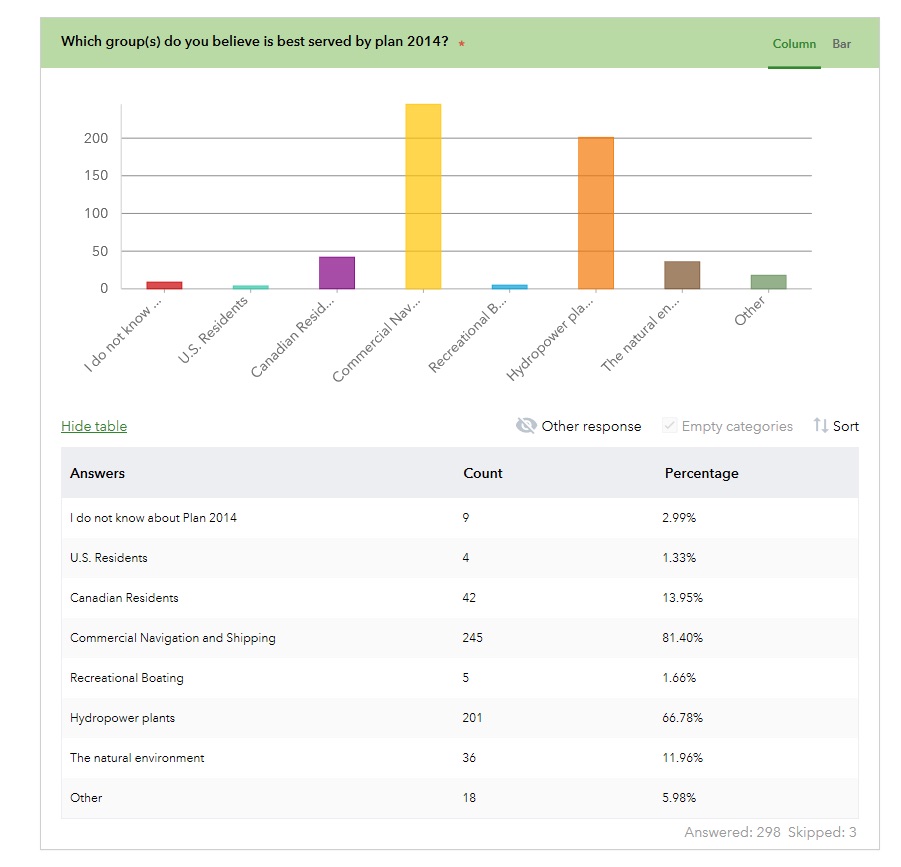 Results for the question, which group do you believe is best served by Plan 2014?

According to the International Lake Ontario-St. Lawrence River Board, which monitors water levels, the lake level reached 248.98 feet in late May 2019, breaking the existing record of 248.95 feet established in 2017. This caused damage for thousands of New York residents, and Gov. Andrew Cuomo declared a state of emergency in both years.

Students noted that many residents were open to talking about their experiences living on Lake Ontario. Several residents even invited students to pour over water level data that they have personally collected over the years.

“It’s useful to compile this information and show that there is a shared belief in this community,” said Emily Haberlack, an REU student from Iowa State University.

“Hopefully policy-makers can use this information to better understand their constituents, start a discussion and make more active decisions for their people,” said Thomley.

Other REU students who worked on the study included Mahoney; Thomley; Haberlack; Julia Olson, who goes to University of Oregon; Enith Lay, who goes to Monroe Community College; and Kyle Pecsok, who goes to Clark University.

The group hopes to officially publish their findings in the future. For more information about the Geographic Information Systems for Disaster Resilience Spatial Thinking REU, go to rit.edu/gccis/geoinfosciencecenter/research/nsf-reu.