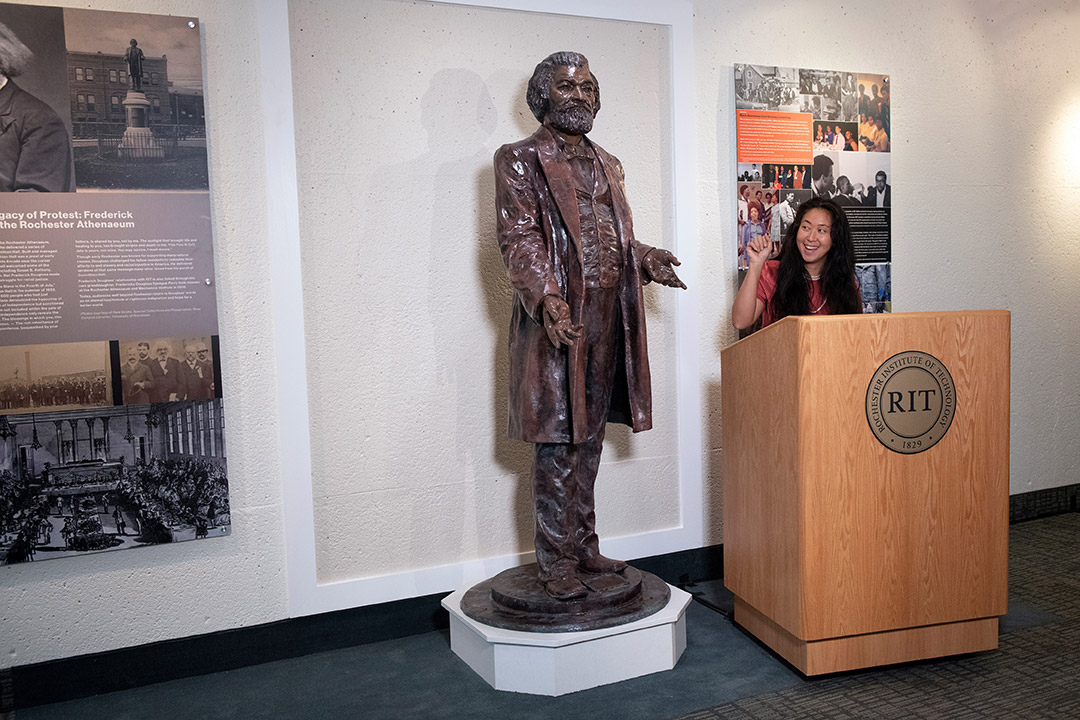 RIT unveiled a new sculpture of Frederick Douglass in celebration of the 50th anniversary of RIT’s Black Awareness Coordinating Committee (BACC)—RIT’s first cultural club—and in honor of the 200th birthday of the great orator and abolitionist. The statue was created by Olivia Kim, an adjunct professor in the College of Art and Design who teaches figure sculpture.

Rochester Institute of Technology unveiled a new sculpture of Frederick Douglass and a display of four cultural flags in the university’s Student Alumni Union. A special ceremony to dedicate the new additions to the campus was held on Friday, Oct. 2, and streamed online for the RIT community.

The sculpture of Douglass was commissioned by RIT President David Munson and Vice President and Associate Provost for Diversity and Inclusion Keith Jenkins in celebration of the 50th anniversary of RIT’s Black Awareness Coordinating Committee (BACC)—RIT’s first cultural club—and in honor of the 200th birthday of the great orator and abolitionist. The statue was created by Olivia Kim, an adjunct professor in the College of Art and Design who teaches figure sculpture.

“The question for us was how to appropriately honor BACC, an organization built on a rich history of achievement, pride, and unity,” said Jenkins during the ceremony. “I remembered that a bust of Frederick Douglass once sat in the Student Alumni Union as part of a BACC display. My recollection of the bust led to acknowledgement of the work of Olivia Kim.”

In 2018, Kim made 13 Bicentennial Frederick Douglass Sculptures for the not-for-profit Rochester Community Television in less than seven months with the help of more than 150 volunteers, including many RIT community members. During the ceremony, Kim discussed the message she attempted to convey through the sculptures.

“Through the art and science of body language, I have made a sculpture that expresses how Douglass’ many struggles forged a profound love for humanity. He exemplifies our unity of spirit and our ability to find the truth within ourselves. His presence here is a reminder that our humanity is the true heart of all technology. As technology progresses, it must be kept in symbiotic harmony with all life. Our evolution is dependent upon holistic creativity whether it be in the form of thought, emotion, or action.”

President Munson noted that “Frederick Douglass’ relationship with the Rochester Athenaeum, and thus RIT, dates to the 1850s when he delivered a series of powerful antislavery speeches at Corinthain Hall.” Munson added, “His most famous speech, ‘What to the Slave is the Fourth of July,’ was given from the stage of Corinthian Hall in the summer of 1852. Though early Rochester was known for supporting many reform causes, Douglass challenged his fellow residents to redouble their efforts to end slavery and racial injustice in America. Frederick Douglass’ relationship with RIT is also linked through his own granddaughter. Fredericka Douglass Sprague Perry took classes at the Rochester Athenaeum and Mechanics Institute in 1906.”

BACC first formed in 1968, when there were few minority students at RIT. The organization worked to increase representation on campus, build a strong voice for the African American student, and educate the RIT community about Black culture. Today, the fundamental purpose of the BACC is to improve the overall image, mindset, and college experience of the Black student at RIT. Current BACC president Jemieshaw Pierre-Louis, a fifth-year civil engineering technology student from Binghamton, N.Y., reflected on the significance of RIT installing the sculpture in the heart of campus.

“Today, the unveiling of the Fredrick Douglass statue marks the beginning of a new future for Black students here at RIT—a future that recognizes them as critical for the success of the RIT and the Rochester community,” said Pierre-Louis. “Furthermore, this statue will serve to expose and educate RIT students about Frederick Douglass, a famous orator that served as an abolitionist for our city.”

During a “Calls for Justice at RIT” interfaith vigil in response to the murders of George Floyd, Breonna Taylor, and Ahmaud Arbery in June, President Munson announced that four flags representing cultural and historical significance to RIT would be permanently mounted in the SAU: the Haudenosaunee flag, the Black Lives Matter flag, the Rainbow or Pride flag, and the Sign Union Flag. 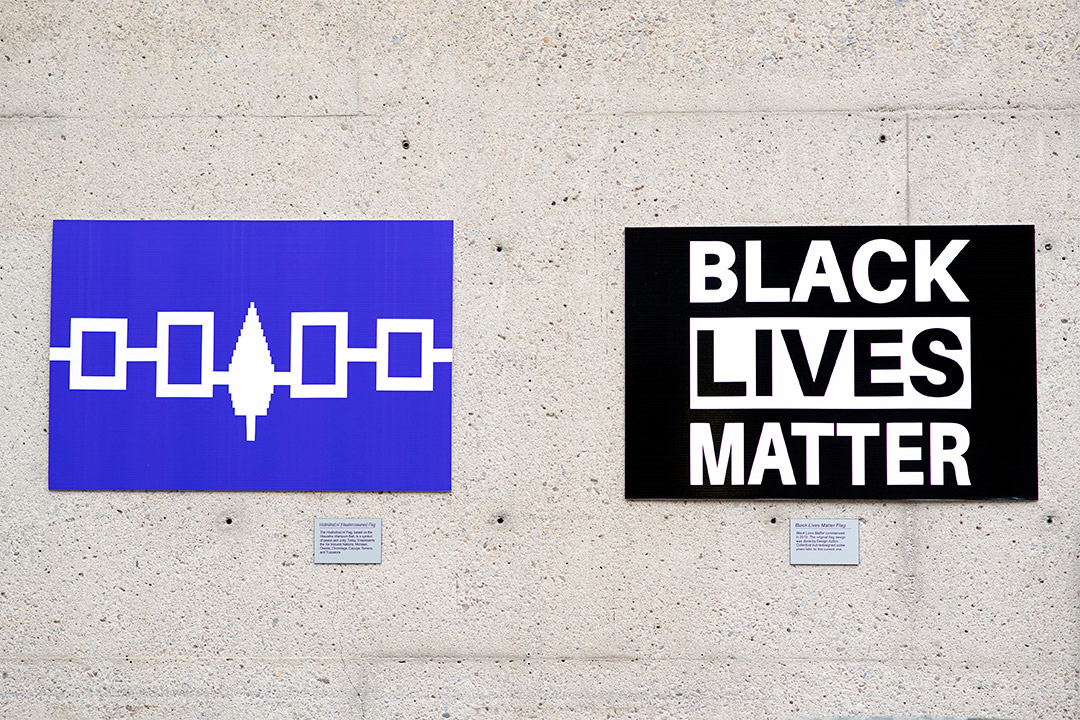 RIT dedicated a display of four cultural flags in the university’s Student Alumni Union. Pictured here are the Haudenosaunee flag and the Black Lives Matter flag.

RIT has displayed flags in the SAU to serve as a visual marker of its commitment to diversity, equity, and inclusion since April 14, 1994, when the International Flags Project was initiated as part of the “One World, One People” conference sponsored by RIT’s Student Government. The purpose of the project was to serve as a visual welcome to the international student population. The flags are changed each year to represent the country of each international student.

The International flag project was followed in 2012 with the installation of the Rainbow flag to serve as a visual reminder of the university’s commitment to the LGBTQ+ community. Today, to unequivocally express commitment and the belief that Black Lives Matter, RIT added the Black Lives Matter flag; the Haudenosaunee Flag, representing the six Native American nations that originally occupied the region where RIT’s campus sits; and the Sign Union Flag, representing RIT’s deaf and hard of hearing community. 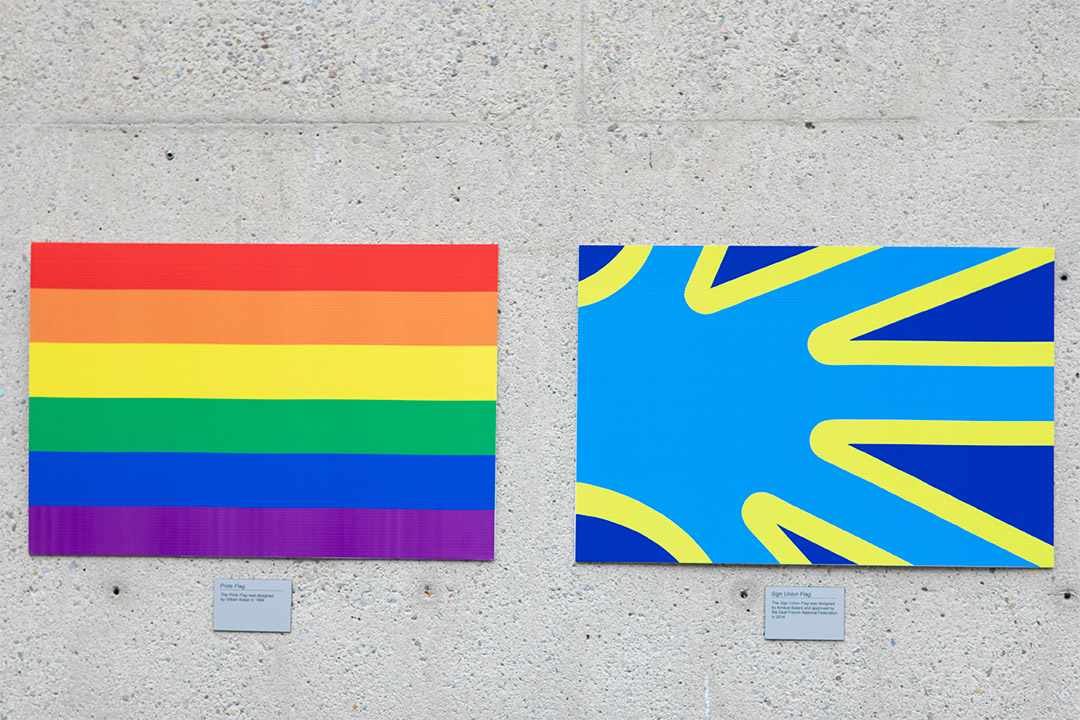 RIT dedicated a display of four cultural flags in the university’s Student Alumni Union. Pictured here are the Rainbow or Pride flag and the Sign Union Flag.

“We are at a pivotal time in history, here at RIT, in Rochester, the country, and the world,” said Sandra Johnson, senior vice president for Student Affairs. “Our mission calls out our responsibility to create a culture where diversity, equity, and inclusion is woven into all that we do. That means we must actively work to remove systemic barriers in our programs, processes, and policies. Today, I would ask you listen carefully to the meaning of these flags to our community and to reflect on the role each of us can, and must play, in making RIT a more welcoming place for all.”