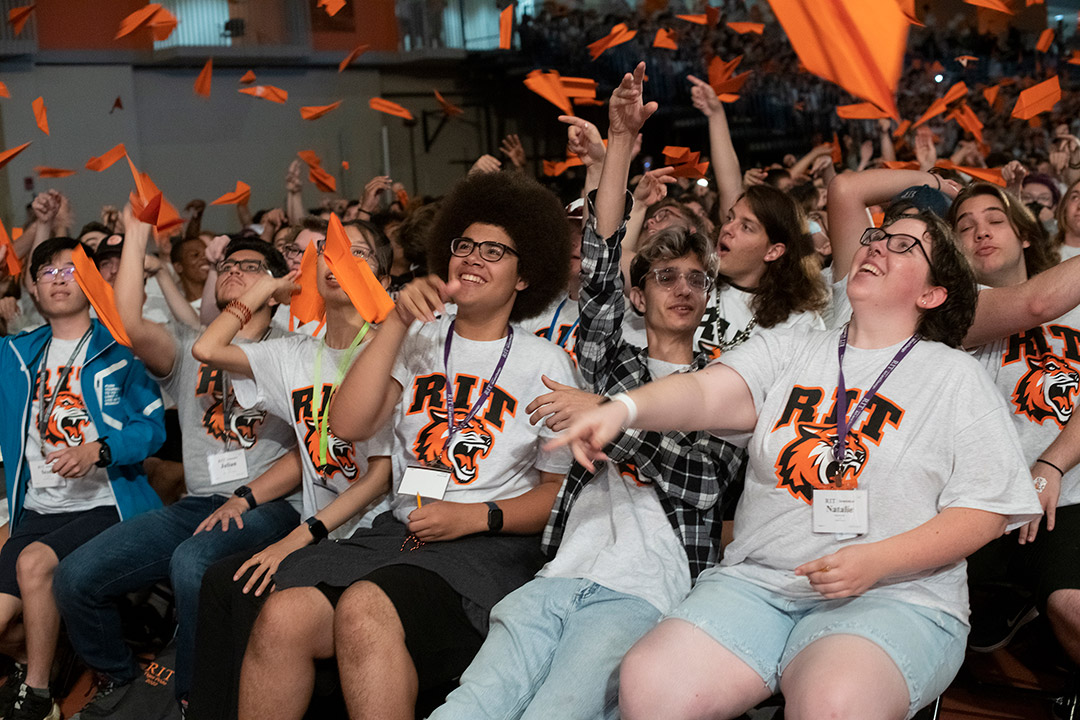 Explore, discover, and get involved were some of the suggestions the newest Rochester Institute of Technology students received during Thursday’s New Student Convocation, which included welcomes from administrators, their new Student Government president, and even some levity featuring RIT President David Munson who pretended he needed to finish his college education.

More than 3,000 first-year students attended the event in the Gordon Field House, immediately after their annual Tiger Walk, where RIT faculty, staff, Ritchie the mascot, and the RIT Pep Band cheered them with yells, clappers, and cow bells as they paraded to the formal convocation. 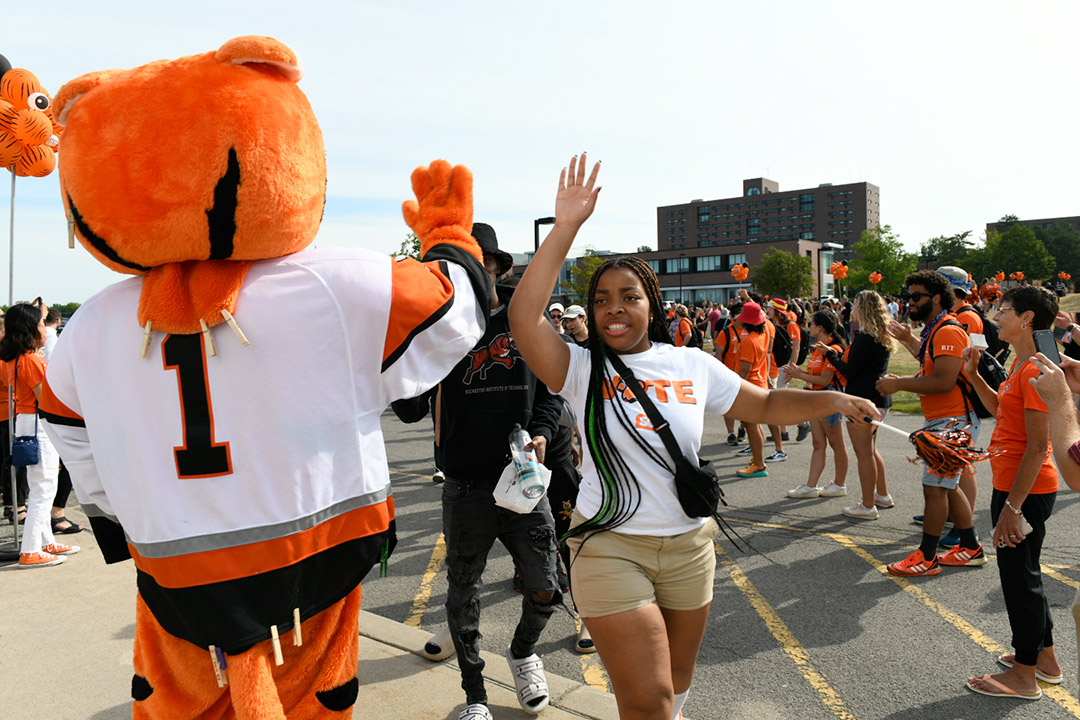 “I am particularly excited to welcome to our guests of honor: RIT’s new students,” said RIT Provost and Senior Vice President for Academic Affairs Ellen Granberg, who hosted the event. “We are all delighted to see you and so glad you have chosen RIT for your journey into higher education—a journey that will change your life, and one we are excited to travel with you.”

Granberg said the students, making up one of the largest incoming first-year classes in RIT’s history, were also academically prepared, with an average SAT score of 1355 and an average ACT score of 30. Their high school GPA average was 93.

About 750 students are in the Accelerated Scholars program to earn both a bachelor’s and graduate degree. There are 15 Fulbright Scholars, and nearly 500 students are receiving Performing Arts Scholarships. 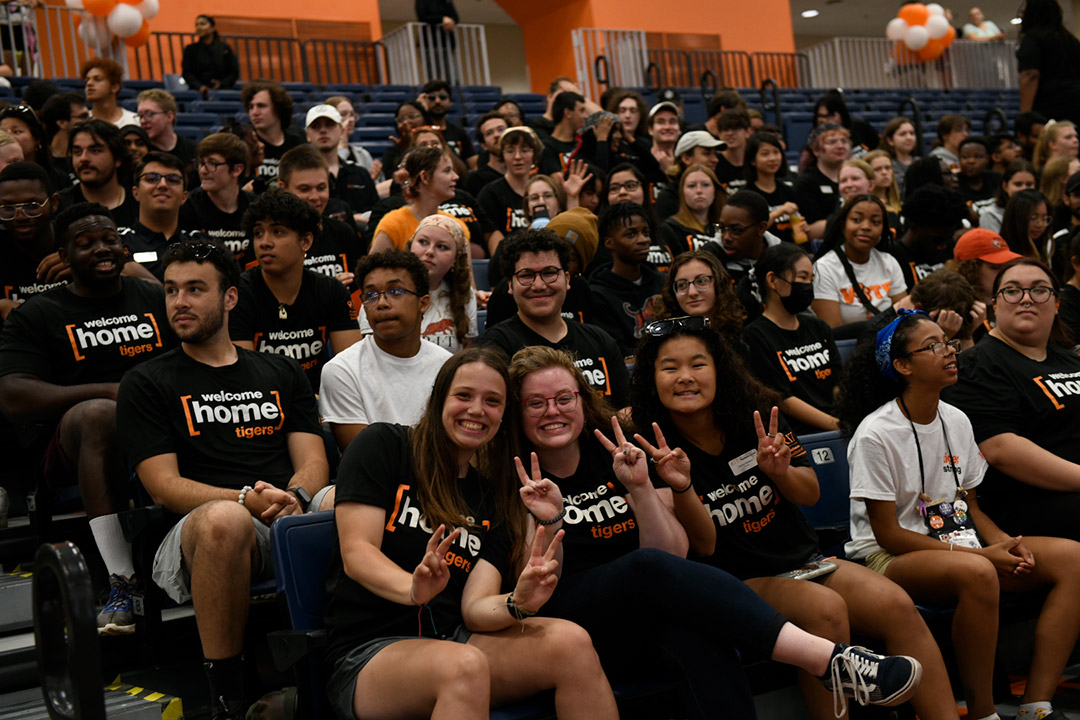 The first-year undergraduate students come from nearly every state, as well as 36 countries, with the largest contingents coming from India, Canada, and China.

And there are 990 new graduate students this semester, including 92 Ph.D. students and 114 studying online. Graduate students this year came from 50 countries, with the largest contingents from India, China, Nigeria, and Iran. International students make up almost 60 percent of RIT’s incoming graduate class.

Sandra Johnson, senior vice president for Student Affairs, also welcomed the students to “this dynamic community of learners. Each of you brings a wide range of ambitions, expectations, passions, goals, and dreams. Each of you belong here at RIT. We respect and value you.”

Johnson dared the students to dream, act on their dreams, and persevere when they hit a bump along the way. “Embrace your dreams and continually create new ones,” she said. “Be open to new ideas and experiences—you will be amazed by where your journey will take you.”

She had each student write a dream on a piece of paper, which was folded into a paper airplane and tossed in the air and the end of the program.

The keynote speaker was Jessica Hardin, assistant professor of anthropology in RIT’s College of Liberal Arts and recent recipient of the Richard and Virginia Eisenhart Provost’s Award for excellence in the classroom, one of the university’s highest honors.

Hardin told students their success will depend on their commitment and involvement in their classes.

She said professors, as well as their students, are responsible for creating safe, exciting, and rigorous learning environments.

“Learning is not passive,” she said. “Professors don’t deliver knowledge to you, but instead you learn together, from each other, and create knowledge.”

Student Government President Aditya Khanna, wearing the traditional orange blazer that goes with his title, recalled being a freshman and sitting where they are now.

“Your time here goes by quickly, so I urge you to immerse yourself in the full RIT experience early on,” Khanna said. “If I could go back to my first year, I would have attended more things on campus, because I’ve grown to love all the movie nights on Greek lawn, Humans vs. Zombies weeks, and all the other activities that make this place so special.”

President Munson also welcomed the new students and their families and told them to ask for help if at any point they have a problem or feel like giving up.

“Our goal is to maintain a healthy campus culture so students succeed in reaching academic and personal goals,” he said. 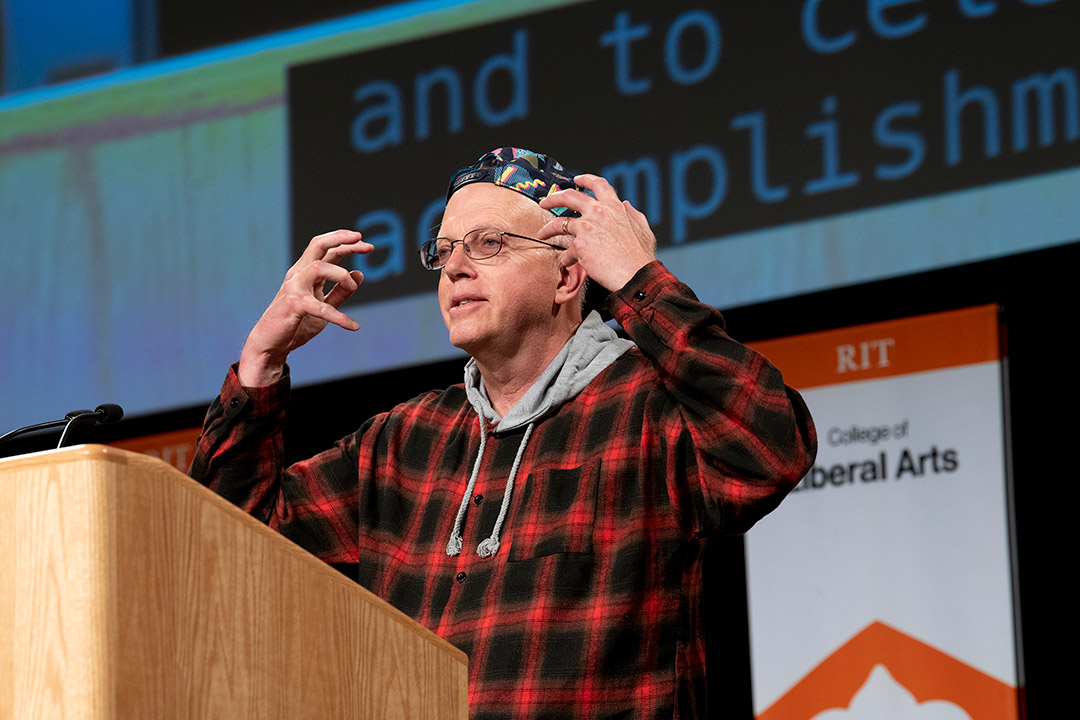 RIT President Munson joked he was going to return to classes as well.

He showed a brief video, a tradition Munson has done for incoming students. This year, Munson supposedly learns he needed to go back to college to finish his degree, so he joins the students as he navigates a skateboard, finding the correct buildings on campus, and ultimately completing his degree through perseverance.

As Munson returned to the podium, his academic regalia was replaced by a flannel hoodie and a backwards baseball cap he wore in the video.

Continuing his message to students, he said RIT graduates are prepared to be citizens of the world.

“That means preparing our students not just for jobs and careers, but also for life,” he said. “In the RIT context, ‘innovation’ takes on a rich meaning; it is not just about novelty or originality; it is about creating the tools, processes, and systems that will make things better than they are.” 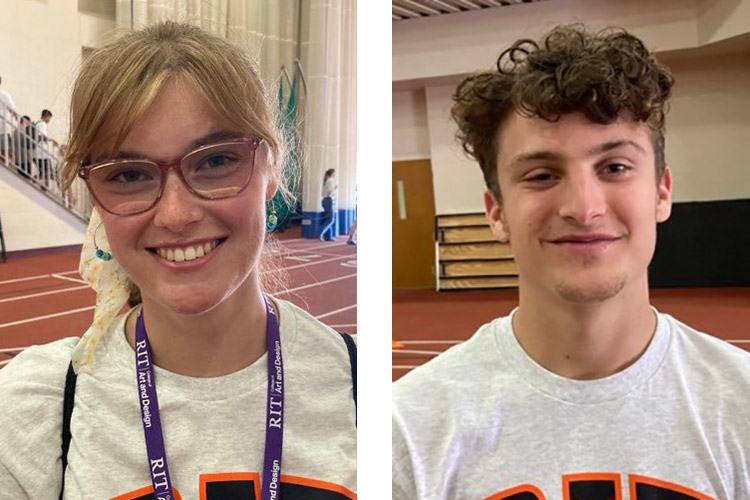 Leaving the ceremony, many students said they were eager to see what’s next for them.

“This week has been great,” said Audrey Plumb, a film and animation major from Medfield, Mass. “Everybody has been so supportive and friendly. It’s been really exciting.”

Dom Brugno, a computing security major from Greece, N.Y., said his first days at RIT have been “amazing.”

“I have friends from high school who are my roommates, and I’ve already made a ton more new friends,” he said. 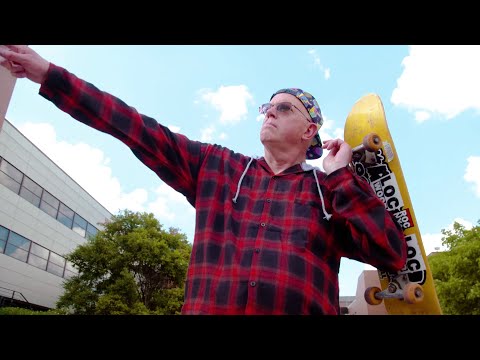