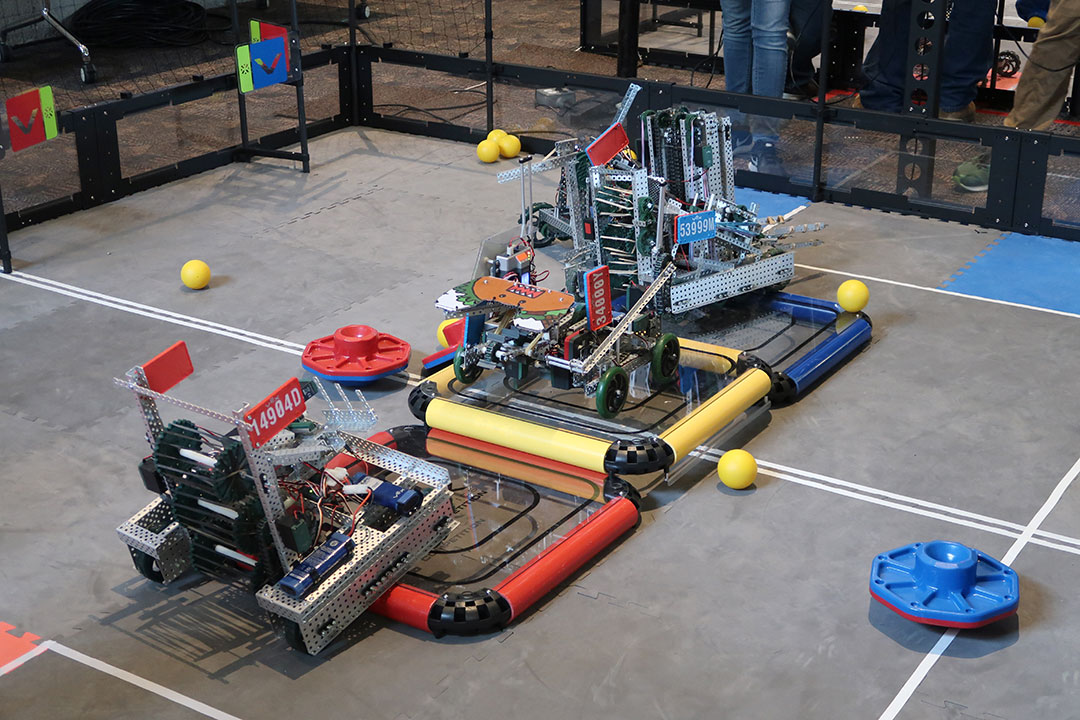 RIT’s VEX U Robotics team hosted universities from around the country for a competition prior to the COIVD-19 pandemic. The club team competed virtually through the remainder of its 2020-21 season and is ranked 12th overall among collegiate teams in the U.S.

The RIT VEX U Robotics team placed third overall in its late March competition at the Purdue SIGBots Remote Skills Qualifier. It was the fourth event of the season and the team moved up to 12th among the 300 teams in the league that includes robots from the U.S., Canada, China, Puerto Rico, Morocco, Spain, and Mexico.

RIT has been part of the VEX U Robotics Education and Competition Foundation program since 2017. The collegiate series provides students with opportunities to put classroom instruction in robotics, science and engineering into practice, and to encourage students to pursue careers in STEM fields. RIT VEX U is based in the College of Engineering Technology.

Teams build model electric vehicles programmed to drive autonomously over several fields and within different categories of challenges. This year’s game, VEX Robotics Competition Change Up is played on a 12-feet-by 12-feet square field with two alliances competing in matches consisting of a fifteen-second autonomous period, followed by a one minute and 45-second driver-controlled period. The object of the game is to attain a higher score than the opposing alliance by placing balls in goals, and connecting rows.

Since February, the RIT VEX U team has competed in competitions via Zoom held by Vaughn College of Aerospace and Technology, Purdue University as well as hosted its own virtual event during the spring semester. Competitions were different because of the limitations on group gatherings but RIT VEX U found ways to compete and connect with peers, said Derek Comingore, the team’s vice president.

“We interact with teams through competitions, supporting them/seeking support, and even have a conversation to share our passion for robotics,” said Comingore, a second-year mechanical engineering technology major from Shelbyville, Ky. “Sure, everything is virtual rather than in person, but VEX Robotics still managed to keep the competition alive by adapting to the situation.”

This year, VEX Robotics asked teams to provide feedback in order to offer the best possible solution to compete virtually. But teams like RIT’s did some virtual development at home or in dorms, and will continue the process until in-person events can resume.

“One of the changes we plan to do is to do the majority of the design process during the summer while at home. We’re able to use CAD software to make virtual prototypes. This is good practice for us as most of us who are in the engineering/engineering technology program will be using CAD to design and present their products,” said Comingore, who has been involved in robotics competitions since high school. His role as one of the team’s leaders is to mentor new members and expand the campus program. Vex U is constantly growing and is expanding Vex AI, which features fully autonomous robotics, technology the team expects to integrate into its next versions of competitive robots.

“The world competition brings the best of the best from all over the world,” said Michael Vasquez, a second-year mechanical engineering student from Danbury, Conn. “Collaborating with our competitors can give valuable insight into how we can better improve our organization.”

Both Vasquez and Comingore will be part of the e-board for RIT’s VEX U Robotics team and will continue with developing technology for the robots as well as learning more about the field.

“Joining the team has enhanced my experience at RIT significantly,” said Vasquez, who also participated in VEX Robotics in high school and held leadership roles. “This time, I was able to step back and learn more from my peers instead of solely from my own failures. Over the course of this season, I’ve grown as a person at a faster rate than I’ve ever experienced. My teammates now are older than me and more knowledgeable in the fields I am interested in. Robotics at this level allows for more creative freedom which has allowed me to express my ideas in more ways than before.”