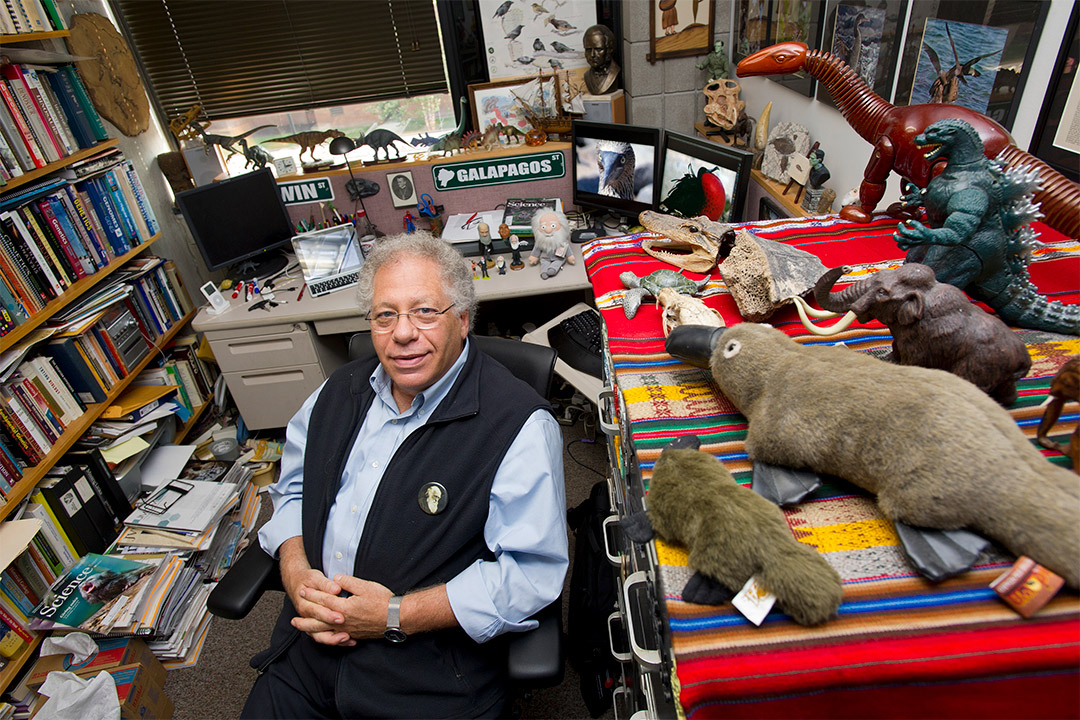 Professor Robert Rothman from the Thomas H. Gosnell School of Life Sciences is retiring, capping off an RIT career that began in 1984.

A pioneer of one of RIT’s earliest study abroad programs and a founding member of the biotechnology and molecular bioscience program has retired. Professor Robert Rothman from the Thomas H. Gosnell School of Life Sciences taught his final courses in Genetics and Evolution and Creationism this spring, capping off an RIT career that began in 1984. 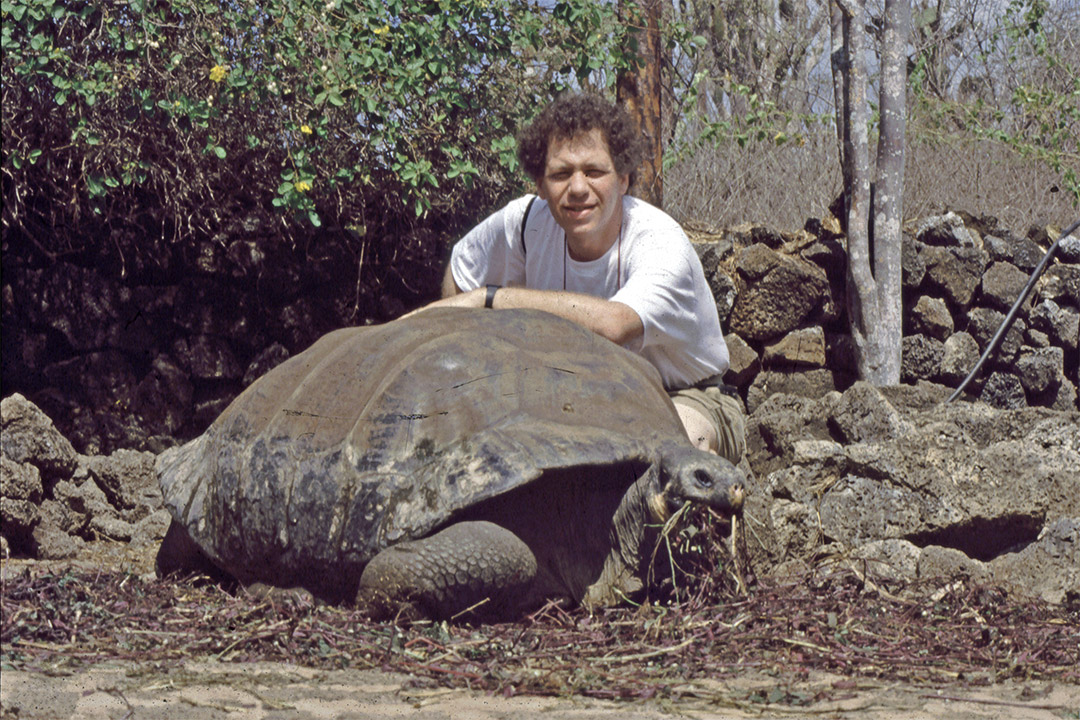 Rothman is pictured with a giant tortoise during his first trip to the Galapagos in 1989. 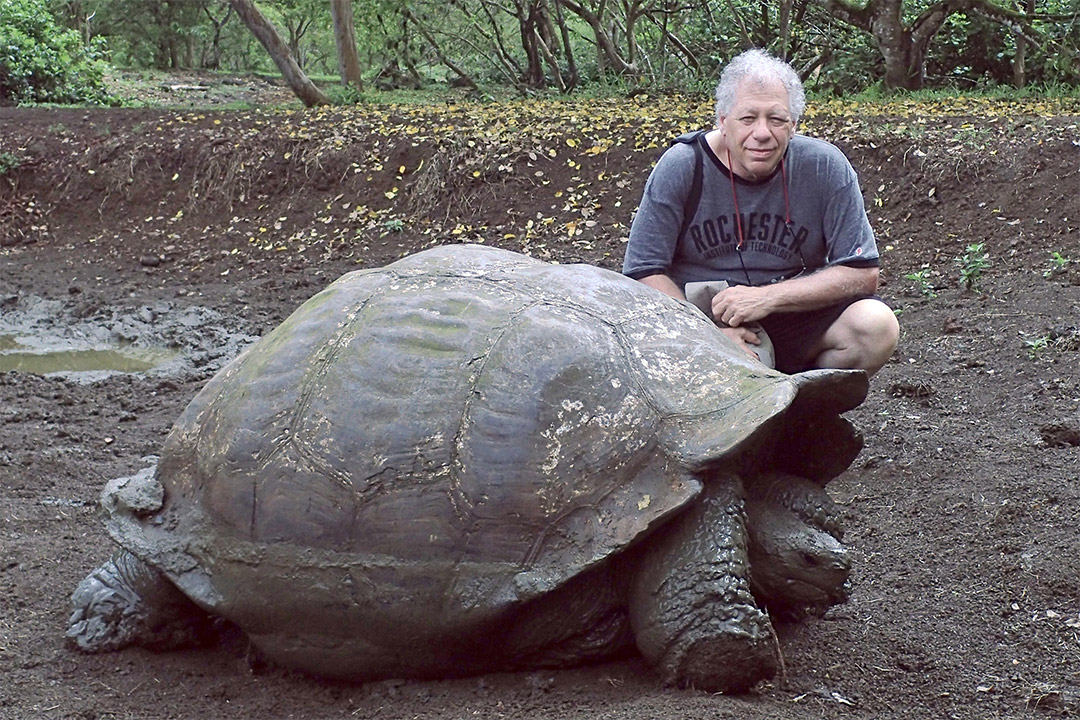 Rothman posed with a giant tortoise during a class trip to the Galapagos in 2017.

Rothman’s long and distinguished career earned him accolades including the Eisenhart Award for Outstanding Teaching—RIT’s highest honor for tenured faculty—in the 1997-98 academic year and a Lifetime Achievement Award from the College of Science in 2019. His work with the biotechnology program foreshadowed RIT’s future emphasis on undergraduate research and he organized annual class trips of up to 15 students to visit the Galapagos Islands to study evolution and ecology beginning in 1989, which laid the groundwork RIT’s future expansions into study abroad.

Looking ahead to the future, he jokingly noted that “this will be the first time since the age of 5 that I haven’t been in school,” but has plans to remain connected with RIT post-retirement. Rothman has been awarded the title professor emeritus and although the RIT Galapagos trip has been canceled for the past two years due to coronavirus, he hopes to revive it again in 2022. He answered several questions while reflecting on his retirement.

What are you most proud of accomplishing during your time at RIT?

I think the two really big things I’ve done here are the Galapagos trip and my genetic engineering course.

The trip is one of these things that just kind of happened. When I was a junior faculty member, I was leading the seminar committee and PBS had a one-hour video about the Galapagos that I showed. While introducing it, I mentioned that the Rochester Museum and Science Center was doing a trip and I would give my right arm to go on it. The dean, John Paliouras, was very pleased with everything I did to help get the biotech program up and running and said he considered it professional development and funded the whole trip, no strings attached. It was an adrenaline-laden trip and it took three days before I could sleep. I kept thinking, “I have to come back and it would be great to bring students.” A couple people said that I should put together my own trip. I thought about it, I contacted the travel agent that organized the RMSC trip, he came up with a proposal, I floated it, and we had enough students to go. We have done it virtually every year since. It is one of the oldest and the longest continually running study abroad program at RIT.

I think the genetic engineering course was probably one of, if not the first, courses on recombinant DNA that was taught to undergraduates in the country. It’s a very intense lab course that was all project-based and I wrote the lab manual. It was a project that took the students through the basic steps of recombinant DNA. They were also responsible for preparing their own reagents. Most labs you come in and do something, it works or it doesn’t, you write a lame lab report and you go on to do something else. This was one of the few classes where it was continuous and what you did the first week of classes affected what you were doing five weeks later. What I particularly liked about the genetic engineering course was that based simply on the skills from that class, students could go out and get jobs or be very competitive for graduate school. It was a very satisfying experience.

What were some of the best ways you formed connections with students?

For quite a number of years, RIT had a connection with the Malaysian government, that was funding a lot of its students to enroll in our biotech program. That relationship was set up by former Department Chair Tom Frederick. He was advisor for the Malaysian Student Association and when he retired, because so many of the Malaysian students were in my genetic engineering course, they asked me if I would step in to do that. What was interesting about it was that virtually all the students in the club were Muslim, and I am Jewish. It was a terrific experience on both sides. We would talk a lot about different traditions and cultures. I got to become familiar with a lot of their music, they would invite me to their functions, and it was a great experience. I’m still in touch with many of the students I got to know through that.

What are your post-retirement plans?

I have just finished writing a book about the iconic reptiles of the Galapagos, A Paradise for Reptiles, that will be published by RIT Press. I have two more book projects in mind, both related to the Galapagos. One is a visitor’s guide to the major sites and the other one is a more general book on Galapagos natural history.

On top of that, I have a lot of photography projects. I have tens of thousands of Galapagos pictures, all digital, and I want to convert them to hard copy. I also do a lot of museum photography for my evolution class and have lots of those images that I want to make permanent. And assuming the coronavirus pandemic ends, I want to do a lot of traveling. I haven’t seen my West Coast grandkids in almost two years now.