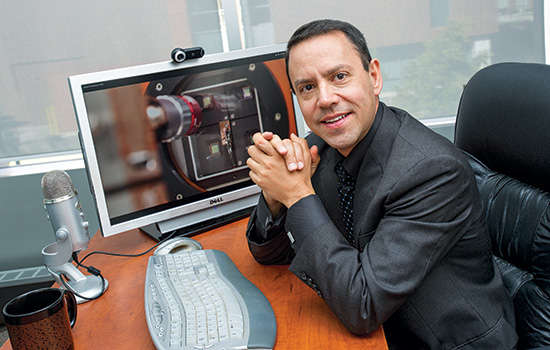 Don Figer established the Center for Detectors as an academic research center within the College of Science in 2010. The center has received more than $11 million in funding.

The road trip to Boston took months to plan.

By September, the scientists and engineers at RIT’s Center for Detectors were ready. They loaded equipment worth nearly a million dollars into the back of a rented truck and left for Massachusetts General Hospital to “borrow” the particle accelerator at the Francis H. Burr Proton Therapy Center.

During the week, the proton beam channels energy from atoms to destroy cancer cells in patients; on the weekends, the accelerator doubles as a radiation source for simulating the effects of the harsh atmosphere in space on astronomical instruments. RIT engineer Brandon Hanold had booked the facility for the weekend of Sept. 7 and 8 to irradiate and test three detectors RIT and Massachusetts Institute of Technology are developing for NASA exoplanet missions, or the hunt for Earth-like planets beyond the Milky Way Galaxy.

It’s all about the photon. These elementary particles are units of light emitted as radiation across the electromagnetic spectrum. Photons are like musical notes on a universal scale that begins with radio waves and ends with gamma waves. Imaging detectors collect the notes, or packets of light, and record the radiation in signals that scientists read like sheet music to gain new understanding of astronomical objects. The pressure is on for imaging technologies that can withstand the radiation in space and collect more photons with less interference. Future space missions depend on detectors to sharpen the focus and widen the view and to record the symphony of the early universe without static.

“Light is mysterious,” says Kim Kolb ’08, ’11 (microelectronic engineering, imaging science), a Ph.D. student in RIT’s Chester F. Carlson Center for Imaging Science. “In astronomy, photons come from a star. The star tells us about our universe—how far the light traveled to get here, how far back in space we’re looking, how stars form and die, how planets form. It’s not that we need that information tomorrow, but it tells us about how our universe works.”

This fall, Kolb won a NASA Earth and Space Science Fellowship in support of her doctoral research comparing and contrasting three different single-photon technologies. They promise a level of sensitivity that will pave the way for the next generation of satellites and imaging detectors to peer deeper into space than today’s instruments.

Imaging detectors are cameras that read signals in the electromagnetic spectrum. They provide a way to follow photons through the universe, to look down at Earth or deep into our bodies. The light-sensitive material at the heart of the device determines which wavelengths can be read.

The silicon detectors the RIT team tested at Massachusetts General capture light in the optical wavelength.

“Silicon has a sensitivity range very similar to the human eye, mostly in the visible spectrum,” Kolb explains. “Infrared detectors can ‘see’ photons at lower energies than the human eye is capable of seeing because a longer wavelength equals lower energy. Going the other way on the spectrum, ultraviolet and X-ray detectors ‘see’ photons that have energies too high for our eyes to see.”

Each of the three detectors tested at Massachusetts General took a few hundred steps to make by scientists at MIT’s Lincoln Laboratory, says Don Figer, director of RIT’s Center for Detectors. His lab is one of the few in the world that specializes in testing detectors. Customized equipment and automated software that Figer spent 10 years perfecting capture the state of the intricate hardware.

The center conducted testing for the James Webb Space Telescope and is currently collaborating with Raytheon Vision Systems to assess and advance a new “family” of large-format infrared detectors grown on silicon wafer substrates.

The Gordon and Betty Moore Foundation funded the collaboration between RIT’s Center for Detectors and MIT’s Lincoln Laboratory to advance optical and infrared detector technology for the future ground-based Thirty Meter Telescope. A grant from NASA’s Exoplanet Mission program leverages the technology and requires radiation testing for possible space applications.

Characterizing the parameters of a single detector can take two to three weeks around the clock. The next step in testing detectors built for space applications requires access to a particle accelerator, such as the one at Massachusetts General.

The hallmark of the technology Hanold placed in the path of the hospital’s proton beam is its solution to “read noise,” the interference that muddies the signal as photons hit the sensor. The detector technology, known as Geiger-mode avalanche photodiodes, or GM-APDSs, circumvents read noise through a digital—not analog—design that records each photon-detection cycle with a “0” (no photon) or a “1” (photon). “Eliminating an entire source of noise is a huge deal,” Kolb says.

Imaging arrays of Geiger-mode avalanche photodiodes are a single photon detector technology that could revolutionize astronomy.

“This is the first step in making better and larger single photon detectors,” Figer says. “They are the only ones like them in the world.”

The detector with the ungainly name is comprised of two parts. One component contains the readout electronics.

“It’s almost like a computer chip that controls the voltages and signals that are delivered to the detector material,” Figer says. “It’s the circuit that also reads those pixels.”

The other part of the detector is the light-sensitive material; in this case, silicon.

“This is silicon on silicon,” Figer says. “The detector is silicon and the circuit that reads it out is silicon. And the two layers are electrically connected through indium bump bonds, tiny little dots, one per pixel.”

The team secured the three detectors (in case one failed) in a vacuum-sealed container called a dewar, outfitted with a side window for maximum exposure.

Working with scientists at the Burr Proton Therapy Center, they irradiated the sensors in steps simulating up to approximately 100 years in space.

“The detectors were incrementally given 10 times the expected dose for a typical mission lifetime of an instrument in space,” Hanold says.

Instruments in space cannot be easily repaired. They must be robust enough to function while damaged.

Kolb tested the detectors in between radiation doses and monitored the decay during the first 24 hours. She continued testing two weeks later as the radiation reached a settling point.

“The goal is to make something that’s indestructible,” Kolb says. “We’re interested in how this device architecture holds up to radiation damage.”

Testing has confirmed the “noise” she expected to see—a higher dark current, or charge created within the devices. Kolb also confirmed an increase in “afterpulsing,” or internal feedback, in the photon detectors.

“The scope of the applications for the sensors we develop doesn’t end at exoplanet missions, though these specific detectors and the radiation testing I did on them is part of a grant in support of that specific goal,” Kolb says. “In biomedical imaging, for instance, we can use detectors to look into the human body. A photon can tell you where the cancer is. Being certain might be the difference of one more photon, one more bead of light.”

Detector technology advanced for scientific exploration holds societal benefits, from new methods of biomedical imaging to remote sensing applications that monitor the health of the planet or the safety of a nation.

“Center for Detectors researchers are pushing the edge of what is possible in ways that will expand future discoveries,” Figer says. “This radiation testing is another example of doing what it takes to advance technology.” 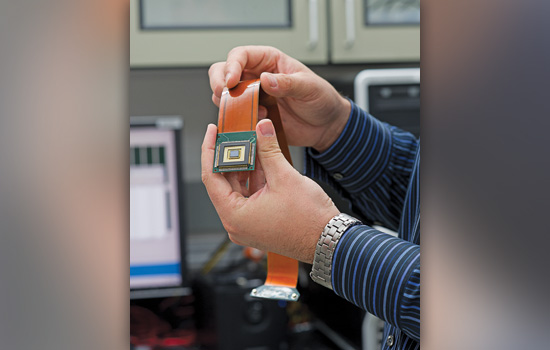 This detector could one day quadruple the collecting power of the largest ground- and space-based telescopes. A. Sue Weisler 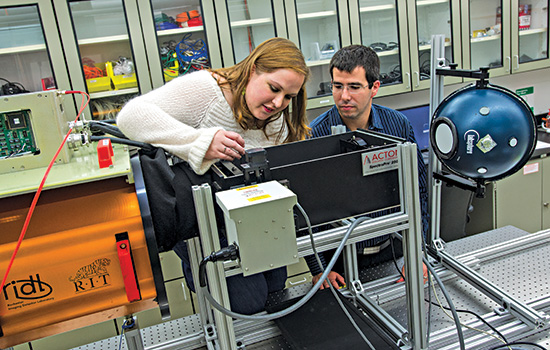 Kim Kolb, a Ph.D student in the Chester F. Carlson Center for Imaging Science, and Brandon Hanold, an engineer in the Center for Detectors, prepare to test one of the detectors grown on silicon wafer substrates. A. Sue Weisler
Search RIT