Center for Advanced Technology will develop next-generation 3D-printing materials, equipment and devices that are key to regional and national manufacturing resurgence 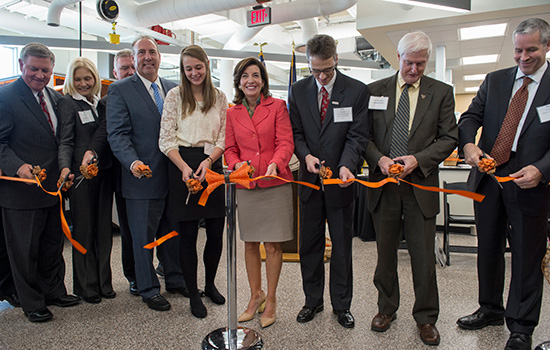 RIT, industry and state officials cut the ribbon on the new Additive Manufacturing and Multifunctional Printing (AMPrint) Center, one of New York stateâ€™s newest Centers for Advanced Technology, on Oct. 25.

The center, located on RIT’s Henrietta campus, is among the first research labs in the world to focus on development of next-generation multi-functional 3D printing technologies, materials and devices. It will bring together university and corporate researchers to advance two industries the Finger Lakes region is noted for—printing and imaging—and enhance the global and national competitiveness of New York state manufacturing.

“Governor Cuomo’s economic development strategy is founded on regional collaboration and the merger of business and academia,” Hochul said. “The AMPrint center symbolizes this approach and affirms RIT’s leadership in establishing the Finger Lakes as a nexus for advanced manufacturing and imaging technology. RIT students are learning the skills that will make them marketable to today’s employers, and that is the model that will lead to jobs and renewed prosperity across the region and all Upstate.”

RIT President Bill Destler said the AMPrint Center “will propel RIT and the Finger Lakes region to the forefront in accelerating the growth of this industry. The state’s Center for Advanced Technology designation, along with the grant we received through the state’s Higher Education Capital Facilities Program and a significant commitment from our partners at Xerox, made it possible for us to build and equip this state-of-the-art facility. The center will be a unique asset to companies for research, product development collaboration and the talent that they need to grow and compete globally.”

The 3,200-square foot AMPrint Center, housed in RIT’s Institute Hall, will be under the direction of Denis Cormier, RIT’s Earl W. Brinkman Professor and a national expert on additive manufacturing and the rapidly growing field of multi-functional 3D printing. Cormier said the AMPrint Center will support the growth and development of the Finger Lakes region’s multi-functional printing “ecosystem,” building on its existing depth and breadth of expertise in print materials, print process systems design, high volume sales and distribution channels and flexible electronics.

“Our goal is to ensure that this region becomes a globally recognized industry hub for multi-functional 3D printing and additive manufacturing,” said Cormier, also a professor in RIT’s Kate Gleason College of Engineering. “The partners in RIT’s AMPrint Center will develop new multi-functional 3D printing technologies that will transform the way many products are manufactured in the future.

“The technology that the public is most familiar with now is hobbyists using 3D printers to make simple prototypes. Next-generation multifunctional 3D printing technologies developed in the RIT AMPrint Center will be faster than anything currently on the market, and they will produce components made from a broad array of materials that will greatly increase their performance.”

“AMPrint is one of the first research labs in the world to focus on next-generation 3D printing and imaging,” said Empire State Development President, CEO & Commissioner Howard Zemsky. “As one of the newest Centers for Advanced Technology in New York state, AMPrint is a perfect fit for the Finger Lakes region, which is at the forefront of production and technology, and this center will foster a closer collaboration between academics and industry partners.”

Additive manufacturing and multifunctional 3D printing refer to processes in which materials are printed, usually layer upon layer, to make objects from 3D model data. It is most often used for design and modeling, fit and function prototyping and parts production, and is acclaimed because it can result in significant savings of time and money, as well as enhanced quality and functionality of products, such as flexible electronics.

These new technologies are capable of blending multiple materials, including metals, ceramics, plastics and composites, within a single component to produce high performance products that would be impossible to produce any other way. Working with industry government and academic partners, the RIT AMPrint Center is leading development of these next-generation multifunctional 3D printing technologies.

The new AMPrint Center offers laboratory space, offices and meeting rooms. It is equipped with state-of-the-art equipment, including an Optomec Aerosol Jet printer, Stratasys additive manufacturing equipment and a Novacentrix photonic curing system. Usually found in industry, the Novacentrix is rare in a university setting and will be a resource for both faculty-researchers and regional companies creating new devices using metals and ceramics.

One of the center’s founding partners, Xerox, entered into an agreement with RIT in 2015 to help create the AMPrint Center. During today’s ceremony, company representatives announced Xerox will invest up to $1.5 million in the center. The partnership affords Xerox direct access to a world-class facility and the potential to collaborate with leading researchers to enhance and propel research and innovation at Xerox, as well as the ability to recruit the next generation of talent, said Karl Dueland, vice president, Digital Manufacturing, Xerox Technology Group.

“RIT is a well-respected and cutting-edge institution, and their goal of creating the AMPrint Center aligned with our capabilities and our commitment to science, technology and innovation,” said Dueland, who will represent the company on the AMPrint industrial advisory board along with Santokh Badesha, Xerox Fellow and manager of Open Innovation.

At the ceremony, Hochul also announced that RIT will acquire the first liquid metal 3D-printing system from Vader Systems, a Buffalo-based company. Among other highlights of today’s ceremony were several demonstrations of current work underway by RIT researchers and their corporate partners, including:

“RIT is fortunate to have one of the most entrepreneurial and innovative student populations,” said Cormier, who worked closely with Wheeler’s team on the helmet prototype. He also acknowledged the proximity of several innovative laboratories and entrepreneurial spaces near the center including RIT’s Battery Prototyping Center and The Construct, a student maker-space initiative, as beneficial to the center and new business development opportunities.

RIT’s partners in the AMPrint center include Clarkson University, SUNY New Paltz, Xerox, GE Research, Corning Inc., Eastman Kodak Co. and Stratasys. Smaller, regional companies will also collaborate with the center and make use of its equipment on such work as developing next generation polymer, metal and composite technologies; synthesizing advanced functional materials; developing additive manufacturing technologies; designing novel devices using the new materials and technologies as well as devising a means to commercialize the materials, processes and applications.

The state is investing in the center to further propel an industry that’s experiencing remarkable growth. According to Wohler’s State of the Industry Report, 2016, the additive manufacturing industry consisting of all additive manufacturing products and services worldwide, grew 25.9 percent to $5.165 billion in 2015. For the second consecutive year, the industry grew by more than $1 billion.

The AMPrint Center is one of 15 Centers for Advanced Technology supported through NYSTAR, NYS Empire State Development Division of Science, Technology and Innovation. The centers support university-industry research and technology transfer in commercially relevant technologies. Grants are awarded through a competitive program intended to spur economic growth, promote workforce development and increase the competitiveness of N.Y. companies in the global marketplace. The RIT center was awarded a 10-year designation in 2015, and includes $921,000 per year in funding from the state to support research operations. Additional funding of $500,000 was awarded through the state’s Higher Education Capital Facilities Program, and was matched by the university and corporate partners to support construction of the lab. The lab also received $100,000 in round 5 of the Regional Council awards process which was used toward equipping the facility.

What they’re saying about the new AMPrint Center

“RIT has always been a leader in innovative technologies. The new AMPrint Center will allow the university to continue to position itself as a nationwide hub for 3D-printing and advanced manufacturing, which will ultimately create new jobs and further strengthen our economy. I am grateful for RIT’s continued leadership in our community and I thank Gov. Cuomo and Empire State Development for investing in our future and making this exciting day possible.”

“The Rochester region has quickly become a leader in manufacturing, innovation and technology thanks in large part to the resources, students and faculty at RIT. The AMPrint Center for Advanced Technology will help leverage the resources that already exist at RIT, specifically in the growing field of 3D printing and additive manufacturing. This is a win-win for Rochester and the Finger Lakes, and will help usher in a new era of manufacturing success in our region.”

“I want to applaud RIT, President Destler and Professor Cormier for this exciting venture into additive manufacturing and multi-functional 3D printing. These new technologies are capable of blending multiple materials that will help bring advanced manufacturing into the next generation of customized production. This is a great day for RIT, the Rochester community and our region as we celebrate this milestone and turn a page on the next chapter on advancements in manufacturing technologies.”

“It’s great to see RIT taking our region’s rich tradition in imaging to the next level by developing the advanced 3-D printing technologies that will create jobs and investment here in the future. Thank you to President Destler, his team, and all of our public and private partners for their commitment to building a stronger, more highly skilled local workforce and economy.”

“The FLREDC has identified advanced manufacturing as a key regional industry sector, particularly in fields such as next generation printing and imaging, and AMPrint is an exceptional use of state funds. AMPrint will encourage greater collaboration between private industry and RIT. Working together, they will develop and explore the applications of new technologies that will foster innovation and economic development in the Finger Lakes region.” 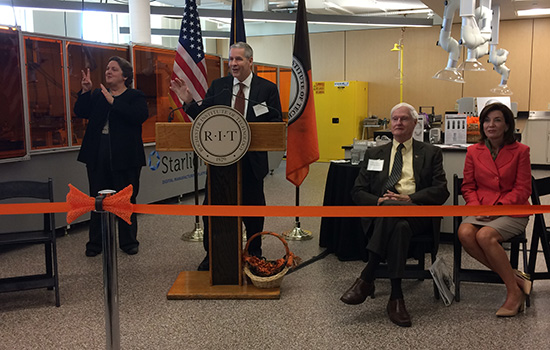 AMPrint Center Director Denis Cormier, RITâ€™s Earl W. Brinkman Professor in the Kate Gleason College of Engineering, spoke at the official opening of the new Additive Manufacturing and Multifunctional Printing (AMPrint) Center, one of New York stateâ€™s newest Centers for Advanced Technology, on Oct. 25. He was joined by RIT President Bill Destler, Lt. Gov. Kathy Hochul and other RIT, industry and state officials. The center, located on RITâ€™s Henrietta campus, is among the first research labs in the world to focus on development of next-generation multi-functional 3D printing technologies, materials and devices. Elizabeth Lamark 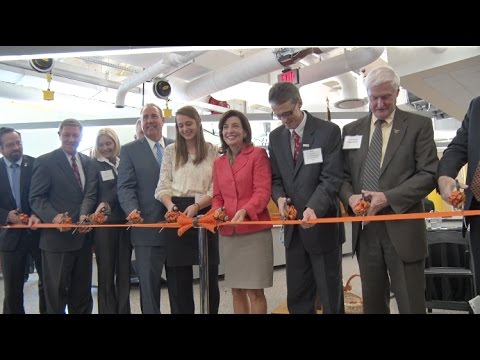