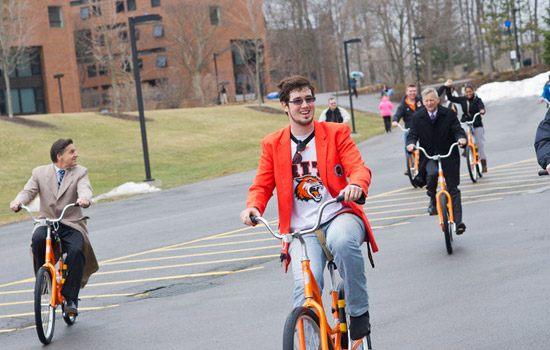 RIT Student Government announced a bike share program for the RIT campus April 7. The free service allows students, faculty and staff to borrow a bike that they can use anywhere for up to 24 hours. The program will initially start with 20 orange Fuji Barnebey bicycles that can be rented from the Residential Office in the Kate Gleason Dormitory. RIT Student Government hopes to grow the program with more bikes being offered at different locations on campus. Here, Student Government President Paul Darragh led a test ride with the bikes.

Students, faculty and staff hoping to get around the Rochester Institute of Technology campus a little quicker will now be able to borrow bicycles through a free bike share program.

RIT Student Government launched the bike share program April 7, showcasing a fleet of 20 new orange Fuji Barnebey bicycles. Riders will be able to register for the new service and take the bikes out for a spin at the Bike Share Kickoff event from 2 to 3 p.m. today in the Gordon Field House.

Bike share programs have become popular in urban areas, where they help to reduce traffic congestion and air pollution by serving as an alternative to personal vehicles or mass transit. While traditional bike share programs allow riders to switch bikes from person to person at multiple locations, RIT’s program will start out as a rental system from the residential office at the Kate Gleason Hall dormitory.

“For right now it’s more of a bike library, where people can check out a bike and return it to its original location within 24 hours,” said Paul Darragh, a third-year software engineering student and president of RIT Student Government. “If it is successful, we hope the program will continue to evolve into a full bike share model that has pick-up and drop-off locations all over campus.”

Bikes are available at the residential office in Kate Gleason Hall. Registered riders can checkout the bikes first-come, first-serve from the office for up to 24 hours. The comfort cruiser bikes are equipped with adjustable seats and a U-lock with a key. Helmets are not provided. Riders can take the bikes off-campus, however a charge will be applied if the bike is not returned within 24 hours.

“As the program develops, I think it will reduce the number of bikes on campus because fewer students will need to bring their own bikes from home,” said Darragh, who is originally from North Attleboro, Mass. “I also think it will be useful for people who want to get across campus quickly and fun for those who just want to go for leisurely ride.”

“The program will remain under the control of Student Government so that we can continue building on it,” said Darragh. “It would be so cool to have RIT students develop the next stages of the program, such as GPS tracking, card swipe capabilities and secure racks for these bikes.”