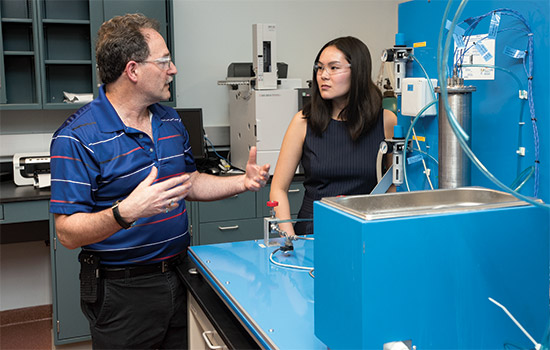 Kimberlee Keithley is the 2017 winner of the Norman A. Miles Scholarship, which is given to a student maintaining a perfect 4.0 GPA. Going into her final year at RIT, she is pursuing two bachelor’s degrees: One in chemical engineering, another in applied mathematics. As part of the scholarship recognition, she shared the award with faculty-researcher and her mentor, Steven Weinstein. He is the department head of chemical engineering in RIT’s Kate Gleason College of Engineering.

Undergraduate student Kimberlee Keithley has maintained a 4.0 GPA since she began at RIT. She is the 2017 winner of the Norman A. Miles Scholarship, which recognizes that achievement. She’ll go into her final year at RIT to complete two degrees, one in chemical engineering and the other in applied mathematics. As part of the recognition, Keithley shared the award with Steven Weinstein, a faculty-researcher and department chair of the chemical engineering program in RIT’s Kate Gleason College of Engineering. Weinstein has been an influential mentor for Keithley since she began at RIT.

“I have always been interested in mathematics. A math immersion turned into a math minor and it turned into a math major. I wasn’t one of those people who always knew I was going to do both, it just happened,” said the fifth-year student from Kennebunk, Maine. “And Dr. Weinstein, his passion is fluid dynamics. He suggested that because I liked the interface between chemical engineering and math, that I look into fluid dynamics. That’s a field where the two really come together.”

Their work comes together on applications of mathematical modeling of dynamic systems, specifically the stability of fluid systems with deformable boundaries such as air-liquid interfaces. This research is relevant to industrial processes in which liquid films are coated onto moving substrates and is needed to predict conditions under which uniform liquid films may be attained.

The scholarship is applied toward tuition for the upcoming year and is given to a student who began studies as a freshman at RIT and is entering their last year of undergraduate study with the highest grade point average across the university. Statements of support from the dean, associate dean for undergraduate education and department chairperson are also considered for the award designation. A second component of the award allows the student to select an influential faculty member to be given the Norman A. Miles Award for Academic Excellence in Teaching. The faculty member receives the same amount as the student award and it can be used for professional use toward equipment purchases, conference attendance or other professional development activities.

Keithley selected Weinstein for the award. She took a course from him in her first year in the chemical engineering program and learned from his ability to understand the underlying mechanisms behind complex lab experiments and computer simulations through mathematical modeling. The mentoring went beyond just immediate solutions. It became the foundation of how to be both a student and researcher, skills she continues to use.

“She honored me by choosing me to receive the corresponding award for excellence in teaching. What a great feeling. It made my year,” said Weinstein. “She consistently has impressed me with her ability to formulate and solve complex problems with exceptional aptitude unexpected from an undergraduate student. I recognized this very early on in her freshman project in my class, where she analyzed a very difficult engineering system with an approach that clearly stood out. Additionally, and what I am perhaps most proud of, is that she is humble about her accomplishments, freely shares her knowledge with others, and is a wonderful role model to her classmates.”

Weinstein and Keithley will continue work together this summer as part of an interdisciplinary fluid dynamics team that includes Nathaniel Barlow and Michael Cromer, both assistant professors in RIT’s School of Mathematical Sciences, as well as 10 undergraduate students from engineering and mathematics. Keithley has taken on a co-op working with Cromer focusing on the mechanics of complex fluids having entangled polymers—bonded chains of materials that can range from plastics to proteins. Understanding different types of stressors on liquid polymers in applications such as ink jet printing, for example, may alleviate fragmentation or disintegration of materials imbedded in manufactured products.

Keithley won a competitive Society of Chemical Industry Scholars Summer Internship in 2016 and spent time working at Dow Corning. She also represented her research team findings on algebraic instabilities at the 2016 Annual Meeting of the American Physical Society Division of Fluid Dynamics. She is a co-author on two peer-reviewed journal articles, with more to come. After graduation, she intends to go to graduate school and attain a doctoral degree.