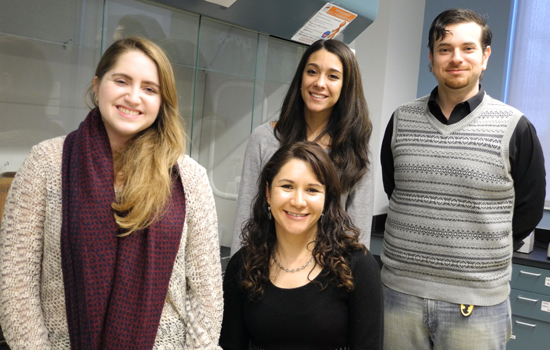 Students (standing left to right) Alexandra LaLonde, Maria Romero-Creel and Mario Saucedo-Espinosa won top placements at the American Institute of Chemical Engineers annual conference for their work with Professor Blanca Lapizco-Encinas (sitting) on biomedical separations and lab-on-a-chip devices. All are part of the Microscale BioSeparations Laboratory in the Kate Gleason College of Engineering.

Three students from Rochester Institute of Technology were recognized for their research findings about improvements to bio-separation techniques for lab-on-a-chip medical devices. They were awarded top honors in several categories in the undergraduate and graduate research competitions at the American Institute of Chemical Engineers annual meeting and conference in November in Salt Lake City, Utah.

Alexandra LaLonde and Maria Romero-Creel, both undergraduates in RIT’s biomedical engineering program, placed first and second, respectively, in the Undergraduate Research Posters Competition-Separations Division. More than 300 research projects by undergraduate students from universities across the country were presented in this competition and were judged by university professors and researchers from different research areas.

Mario Saucedo-Espinosa, a doctoral student in the university’s microsystems program, placed first at the AES Electrophoresis Society graduate student poster competition, part of the overall AIChE conference. These posters were judged by scientists in the area of microfluidics and electrophoresis.

The students’ work introduced improved microfluidic techniques with the potential to separate larger and rare cells found in fluids such as blood, reducing the time to separate these particles and significantly lowering the time that biological cells were exposed to negative dielectrophoretic effects. Techniques for separating fluid samples are useful in areas where rapid results are essential such as testing for food and water safety or clinical analysis of disease.

“In my almost 11 years as a faculty member, this is the first time that I had 100 percent of the students win awards. I took three students who presented eight papers at the conference and they all took awards at the conference. It is unheard of,” said Blanca Lapizco-Encinas, associate professor of biomedical engineering in RIT’s Kate Gleason College of Engineering. She mentors all three students in her Microscale BioSeparations Laboratory developing techniques in microfluidics to separate cells so that scientists and clinicians can better analyze diseases through technology such as lab-on-a-chip devices— highly sophisticated laboratories on microchips. This work is part of her National Science Foundation grant-funded project “Rapid and Dynamic Cell Assessments in Dielectrophoresis-based Microfluidic Devices.” These devices have multiple channels where fluid samples are assessed after being exposed to electrical currents that cause the bio-particles to separate for more efficient analysis. The student-researchers have been involved in advancing device system designs and in determining the threshold of electrical fields applied to adequately manipulate the fluids but also ensuring that live cells are not damaged.

“Ours is a small lab, compared to some of the others at the conference, but we are producing as much or more experiments and journal articles about this work,” said Saucedo-Espinosa, who is from Monterrey, Mexico, and in his final year of the doctoral program. “People were impressed with our results and the quality of the work. We are trying to fill in the gaps in the field of science so we are designing devices that others have not been able to do so far. Our group has developed a system where we can separate cells faster and with less electrical treatment. This means less damage to the cells.”

The results were some of the first seen confirming techniques and processes that preserve cell integrity, said Romero-Creel.

“Some of the questions the judges asked were about theory and how exactly the devices work because we are definitely in a field that is very specialized,” said the fourth-year student from Newton, Mass. “Our projects focus on preserving cell integrity and being able to maintain appropriate cell properties to continue to grow them or do other important tests.”

LaLonde agreed. “It’s such as specific field and it’s nice to get other opinions from people who actually do the same work. These techniques will be good for diagnostics and clinical relevance, and this system can be used for something as applicable as detecting cancer cells.

“It was also nice to talk to people at the conference who had such a wealth of knowledge in this area, not only for the experience, but also to be able to talk to others who were familiar with what we were working on,” said LaLonde, who is from Syracuse, N.Y. She will graduate from RIT this May.

Students need to have both an understanding of engineering and biological theory, but also the math modeling necessary to assess different designs and processes, said Lapizco-Encinas.

“They spend as much time at the computer as they do with a microscope and preparing experiments. They all worked really hard and it shows,” she added. “I value their level of professionalism and dedication. The degree of complexity keeps increasing because we keep learning and using these techniques to implement our next steps. There were some struggles, but kept pushing; these students are smart and resilient.”