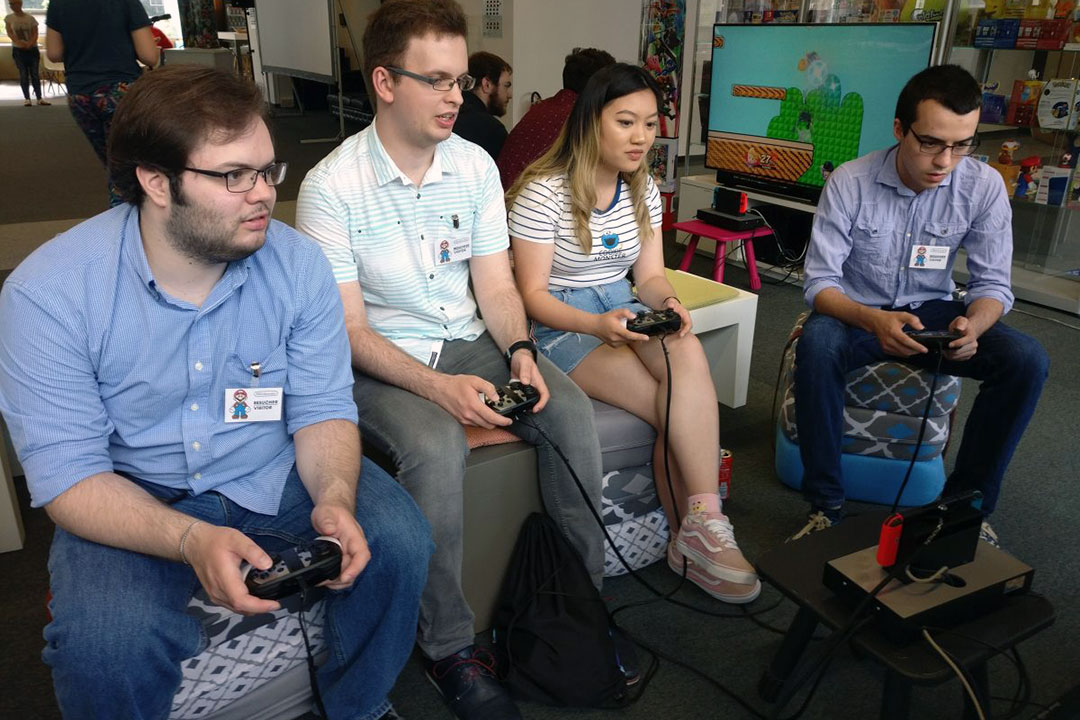 Seven RIT students spent two weeks in Germany, where they learned about the German game design and development industry and visited Nintendo of Europe headquarters.

Seven Rochester Institute of Technology students began their summer break in Germany, immersing themselves in a new culture and the biggest video game market in Europe.

The two-week trip through the German cities of Paderborn and Frankfurt was the culmination of a spring semester course that introduced students to game design and development in Germany. For the study abroad program, students participated in an extended game jam with German students, sat in on a class about artificial intelligence in the games industry and toured three game studios, including Nintendo of Europe. 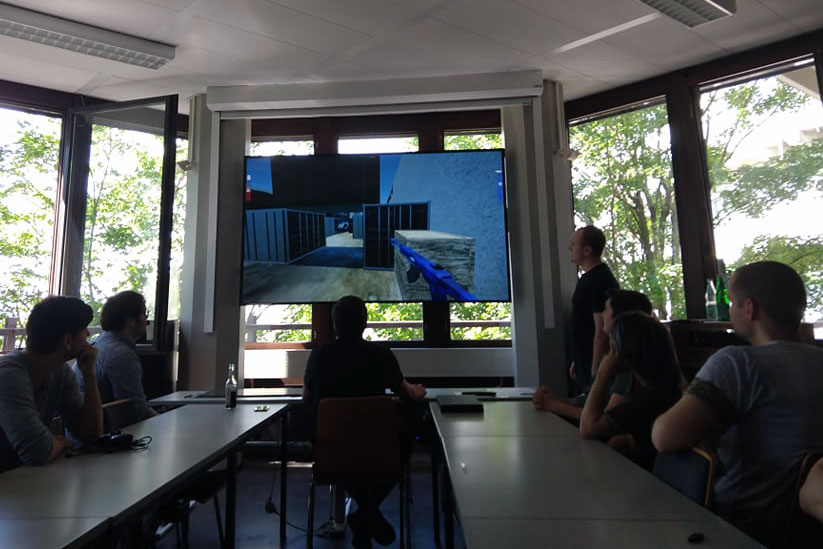 Sam Finston For the study abroad, RIT students worked with German students to build video games from scratch in a game jam

“When our students think about where video games come from, they tend to think about the U.S. and Japan,” said Stephen Jacobs, a professor in RIT’s School of Interactive Games and Media. “They — and most video game players — don’t know that Germany is one of the largest markets for, and producers of, video games.”

In 2010, Jacobs began a partnership with professor Jörg Müller-Lietzkow at the University of Paderborn. RIT classes have visited Germany in 2014 and 2017. German students have also visited RIT.

“On this trip, students get to see how the industry works outside of the U.S.,” Jacobs said. “In general, I think it’s really important for students who can do so to take advantage of a study abroad experience.” 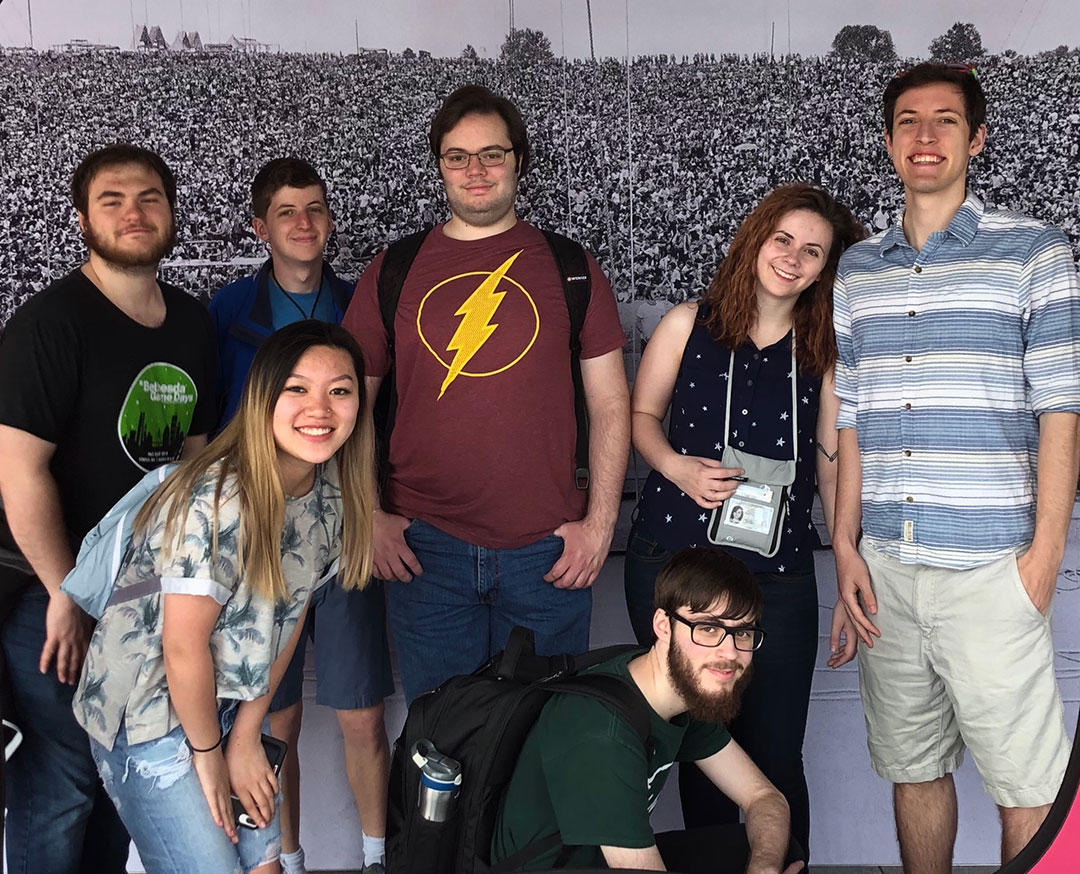 As a part of this year’s class, students logged their adventures in a class blog, titled the RIT German Game Industry 2019.

On the trip, students learned about the localization and marketing efforts at Nintendo of Europe and Nintendo of Germany, while also getting a chance to play some games in Nintendo’s breakroom. The group also toured Crytek studios, the original developer of Far Cry, to learn about its proprietary engine CryEngine and try out a virtual reality game on the Oculus.

“We were shown a presentation of what students should expect when looking for jobs in the game design industry,” wrote Joshua Rand, a game design and development master’s student from Litchfield, N.H.

“It was weird to think that the people touring us might be interested in hiring us one day,” wrote Sam Finston, a fourth-year game design and development major from Cranford, N.J.

In the city of Worms, the group also toured the offices of video game developer and publisher Kalypso. The game professionals talked about differences between the American and European video game markets and about the role of quality assurance. 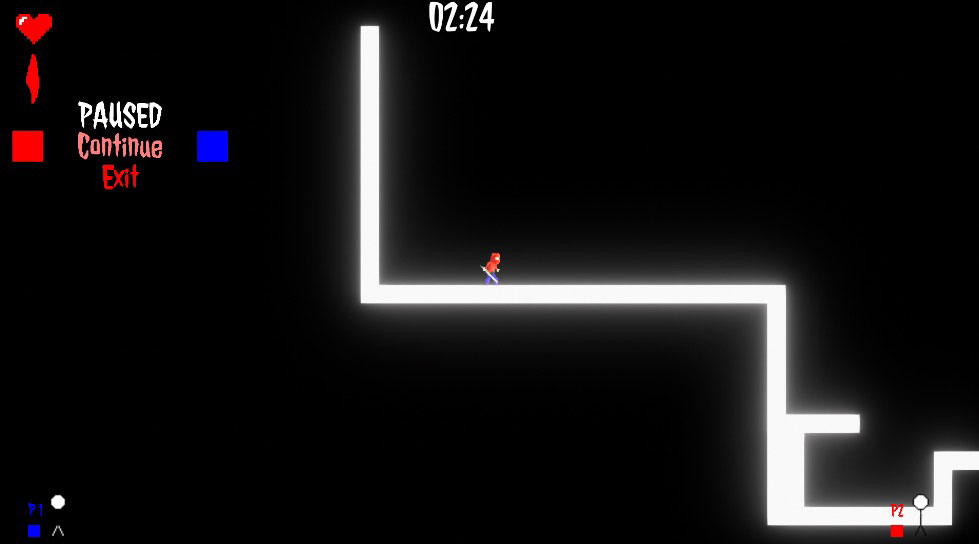 Soshi Shinobi was one of the 2D games created by students during the game jam. In Soshi Shinobi, two players each control one half of a ninja character, which has fire and water elemental powers assigned to either its legs or arms.

“Quality assurance involves not just playing games, but carefully examining them and trying to cause bugs to occur, as well as reporting those bugs,” wrote Rand. “Quality assurance engineering/testing is generally the entry-level job for most game design graduates and is what I hope to land as my first job in the industry, eventually working up to a UI designer/programmer or gameplay programmer.”

The group also spent several days with German students who are studying game design and development at the University of Paderborn. Students sat in on a lecture from Professor Müller-Lietzkow’s graduate student, Maike En, about artificial intelligence and its current (and future) applications in video games.

“I found this subject particularly interesting because I have spent some of my own personal time looking into the subject of AI and the different ways it can be developed and implemented,” wrote Michael Schek, a fourth-year game design and development major from Brewster, N.Y. “Specifically, I am interested in the concept of building Neural Network AIs that take in information and are able to adapt and form connections and decisions based off of that information.”

RIT students joined the German students for a barbeque and got to playtest a platformer they are developing called Q.

The international group of students also discussed the differences and similarities in their studies while collaborating in a four-day game jam. The RIT students worked in teams with about 60 University of Paderborn students to create video games from scratch, with the theme of “working better together.”

Students started by breaking into pairs to brainstorm game ideas. After pitching games to the larger group and voting on ideas, teams were formed with an even distribution of programmers, artists, game designers and sound designers in each group.

“Something I found very refreshing was the sheer number of people who didn’t just code,” wrote Finston. “There was an especially large group of sound people, and even quite a few who designed primarily—I’m used to design on small teams being a shared responsibility. I ended up on a team with a very ambitious idea that doesn’t really fit with the games I usually play or make, hoping to learn something new.”

Amanda Dellostritto, a fourth-year film and animation student from Auburn, N.Y., successfully pitched the game Return to Otter Space, a short film idea she had created for a final project a few semesters ago.

“As it implies, an astronaut crashes onto a water planet and befriends an otter to help him rebuild his ship and return to outer (otter) space,” wrote Dellostritto.

After a few days creating the games, students presented their prototypes for the rest of the developers.

“The games that were presented all looked amazing considering the limited amount of time and resources available to work on them,” wrote Schek. “I was particularly impressed by the fact that the Strike Counter game was able to get networking setup, and the amount of detail and presentation of the game Beat the Boss.”

The RIT group also made its way to the Heinz Nixdorf Museum, the world’s biggest computer museum, and met the mayor of Eltville, a traditional wine-making town outside of Frankfurt, who hosted the group with a local wine and pretzel reception. Students visited castles, tried spaghetti ice cream and visited the Jewish Cemetery in Worms, which is known as the oldest surviving Jewish cemetery in Europe.

“I have started to have conversations about returning to Paderborn to work on the game they will be developing my senior year,” wrote Dellostritto. “It’s still just an idea, but the more I talk about it the more I’m already excited to start planning it.”

Professor Müller-Lietzkow has since assumed a position as the President of Hafen City University in Hamburg. He delayed his start date to support the RIT study abroad class.