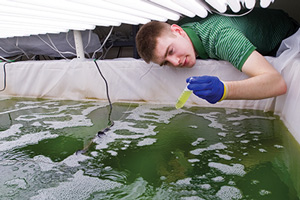 Eric Lannan saw his graduate research outgrow the lab and move into a 100-gallon tank off-campus in an RIT environmental startup run by his thesis advisor. He is shown here testing algae from the scaled-up tank.

The graduate student and RIT biology professor were studying microalgae’s potential as a biofuel and they needed a cheap way to grow it in the lab. Wastewater was an option they were willing to try.

“Wastewater is cheap, abundant and we knew where we could get it,” says Ali Ogut, professor of mechanical engineering at RIT and Lannan’s thesis advisor.

But the team quickly discovered a surprising benefit of growing algae in wastewater: The organisms cleaned the dirty water. Algae’s potential as a simple way to clean wastewater became the new focus of their research.

“Small towns with wastewater treatment plants could use this technology to treat their wastewater and then process the algae,” Ogut says, adding that rural communities don’t always get the benefit of green technologies.

Lodge agrees. “If a small town can process cleaner water that won’t contaminate the land and people’s well water, and convert the algae to biodiesel to fuel the town’s trucks—that’s a win, win, win.”

The professors took Lannan’s graduate research one step further. They purified the algae-treated water by passing it through an ultraviolet radiation system. A simple pH adjustment at the end completed the process of transforming wastewater to drinking water. Suddenly, the little project had big humanitarian applications.

The technique developed at RIT could be adopted to treat wastewater and to provide potable water for people in Haiti, still recovering from the 2010 earthquake, and for rural communities in India.

“I am amazed and somewhat overwhelmed with how far the research has come,” says Lannan, now a performance engineer with Cummins Inc. in Jamestown, N.Y., an international designer and manufacturer of diesel engines. “When I first started the project, I didn’t think that it could become a main topic of research for both Dr. Ogut and Dr. Lodge.” 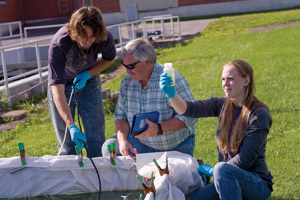 At the time, the team focused on growing and harvesting microalgae—single-celled organisms—for valuable lipids, or fats, the feedstock for biodiesel. Using expensive solutions as a growth medium in the lab was cost prohibitive and restricted the scope of Lannan’s study.

Creative science on a shoestring doesn’t always work, but in the case of Lannan’s thesis research, tapping Monroe County’s supply of nutrient-rich wastewater was like striking oil—the algae thrived.

In the biology lab, Lannan and Lodge discovered that algae hold a surprisingly “green” elegance.

Media attention earlier this year led to a stream of inquiries about the water-cleaning potential of algae.

Phone calls and e-mail messages stacked up with increasing interest from professionals in the water treatment industry and philanthropists, who envisioned what the technology could mean on a humanitarian level.

In response to the outside interest, Environmental Energy Technologies (EET) Inc., an RIT startup run by Ogut, formed a division dedicated to algae as a water treatment technology, with Lodge as a consultant.

“I get e-mails everyday,” Lodge says, “from people in Ireland, Jamaica, Sweden, Syracuse, Washington, D.C. There’s a lot of interest internationally and from philanthropic groups seeking solutions for drinking water in developing countries.” 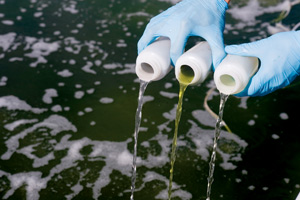 Algae consume nutrients in wastewater. Murky wastewater pouring from the bottle at the left turns green when algae is added, as in the center stream. The result is crystal clear wastewater after the algae treatment.

Wastewater can be converted into drinking water in an organic process starting with algae.

The algae remove ammonia, phosphate and nitrate, significantly reducing the pathogen load; a centrifuge removes the algae; and an ultraviolet radiation system developed at EET kills any leftover pathogens. All that remains for clean, potable water is to adjust the pH level.

Lodge and Ogut, president and chief technology officer of EET, anticipate importing the technology to a site near Port-au-Prince, Haiti, and in rural Nagpur, in Mahal, India.

Philanthropists reached out to them last spring and Lodge and Ogut submitted a budget for a 1,000-gallon tank to Catholic Relief Services, an international humanitarian agency representing the U.S. Catholic community.

In the meantime, an opportunity in India is developing.

The researchers submitted another budgetary plan to Green Self Reliance, a Washington, D.C.-based organization, for a 10,000-gallon algae system for cleaning water in rural India. They suggested using the algal biomass as feed for animals and fish farms.

The philanthropic organization paired the RIT team with a biotechnology company in India as a sponsor through which to submit their proposal to the Indian government.

Shifting to the Webster plant was a logistical decision and gave the team opportunities to continue scaling up and testing algae production in a bigger tank and under direct sunlight.

Lannan’s current job as a performance engineer with Cummins Inc. has nothing to do with algae. He works with diesel engines that power semi-trucks, construction equipment and back-up generators as a member of the company’s Heavy Duty Engineering Department.

“I solve issues with the engine’s calibration to improve overall engine function,” he says. “This includes running tests on engines in test cells as well as out in the field in trucks.”

Lannan’s interest in biofuels led him to focus his graduate work on microalgae’s potential as a source of alternative energy.

In Lodge’s biology lab, he became familiar with the algae strains Scenedesmus, Chlorella and Chlamydomonas, and what they need to thrive.

The traditional way to grow algae in a laboratory uses a synthetic solution enriched with nitrogen and phosphate. Algae consume the chemicals and produce lipids. But not any algae will do.

Scenedesmus, Chlorella and Chlamydomonas produce lipids with the right kind of carbon chains that yield valuable oil, such as biodiesel.

Using wastewater instead of a synthetic medium eliminated the steepest cost in the algae-production equation. According to Lannan, the chemical solution alone can account for as much as 70 percent of the cost of biodiesel.

“You can stick algae in a pond and it grows on its own,” Lannan says. “You get a lot of upstream costs when you’re making synthetic media on a large scale. The cost is the production of all those nutrients that you’re adding to the solution and related transportation costs.”

“We’ve got data to show that the coliform counts are dramatically reduced below the level that’s allowed to go out into Lake Ontario.”

Lannan and Lodge scaled up their algal production, filling 55-gallon drums with wastewater from the plant in Irondequoit to grow the organisms in a 100-gallon tank they built in a back room at EET.

Graduate student Christina Karas transitioned into Lannan’s role as he wrote his thesis.

Current students Adams and Salmon joined the project and saw it through to the next challenge by replicating Lannan’s success in a 1,000-gallon pond at the Webster Wastewater Treatment Plant.

The students are excited to see the project continue its outward trajectory, with the opportunities in Haiti and India coming closer to fruition every month.

The project that started with Lannan has taken on a life of its own and promises to continue to grow.

“I had heard a little bit about using algae to make biodiesel, but it was just that it was a possibility,” Lannan says.

“I view the algae as a means to an end. We were looking for the cheapest way to produce oil for conversion to biodiesel. It just happened that algae were very cheap to grow on wastewater. From that point, it grew into almost a whole other project about effectively cleaning wastewater cheaply using algae.”

Clean energy is a booming industry. Nearly half of the companies in RIT’s business incubator, Venture Creations, are related to clean energy and funded by the New York State Energy Research and Development Authority (NYSERDA).

“The clean energy opportunities are almost identical to those in sustainability,” says Bill Jones, director of Venture Creations. “This reinforces why RIT is so well positioned. The creation of jobs in this field is thriving. Venture Creations is trying to commercialize these various innovations centered around clean energy.”