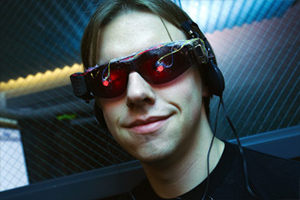 In one area, a student tinkers with a pair of glasses that can manipulate brain waves. In another, students fine-tune a custom-built touch screen tabletop computer. Twenty yards away, others modify a shopping cart to be controlled by a joystick.

It’s not a classroom, laboratory or a workshop. Nor is it the Imagine RIT: Innovation and Creativity Festival, although many of these creations will undoubtedly end up there. It’s the third floor of RIT’s Nathanial Rochester Hall, home of Computer Science House—one of seven special interest housing areas on campus.

It’s a place that allows students with a passion for computing and electronics to live together. It’s a place where students who need help with homework or, more likely, a pet project at 2 a.m. can likely find it by merely walking down the hall to the first open door. It’s a place that transitions ideas, even those that seem far-fetched, into reality.

“We like to do things that have never been done before,” says Alex Crawford, the house’s research and development coordinator. “We think that mindset is the little bit that can set us apart from others. When we graduate, we want to work at companies that are developing new ideas and new technology. This is a warm-up for us.”

There are 56 beds on the floor, and it’s almost always at full capacity. Prospective students who are interested in living in Computer Science House must go through an application process. The selection process isn’t heavily weighted toward academics. Instead, it’s geared toward ensuring that new members are technologically oriented, social and eager to innovate. 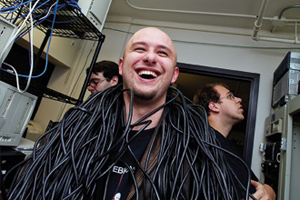 Photos by A. Sue Weisler

Zach Vida walks through the Computer Science House Server Room with power cables draped around his neck. Members maintain the house's servers and other equipment. 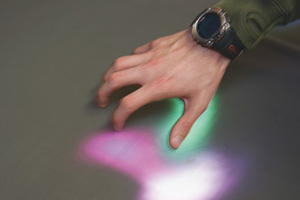 Multitouch, a touch screen tabletop computer, has been a favorite project in recent ears. Multitouch is continuously being improved as more features are added to it. 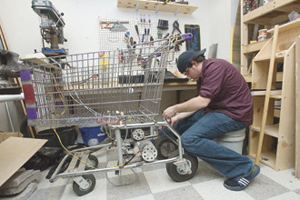 Sean McGary tinkers with the house's motorized shopping cart. When completed, the cart will be able to be controlled by a computer joystick.

Many members say the opportunity to join the house is what brought them to RIT. At a glance, Computer Science House may look like any other residence hall on campus but its facilities are absolutely unique. The floor is equipped with project rooms, a research room, a library, a server room, a user center and other amenities that facilitate the innovation process.

“I was really impressed with the project rooms,” says Crawford, a second-year computer engineering major. “I liked the idea that entire rooms were devoted to working on projects. They allow people to come out of their rooms and work together.”

The house is comprised heavily, but not entirely, of students from the B. Thomas Golisano College of Computing and Information Sciences. However, the house prides itself on the variety of skill sets it includes.

“We have a very heterogeneous environment that is comprised of different majors,” says Nathan Green, the Computer Science House chairman and a fifth-year computer science major. “We get people from the College of Science, Kate Gleason College of Engineering and recently we’ve gotten members from the College of Imaging Arts and Sciences. Graphics and animation are important to what we do.”

Green says that the range of female membership has fluctuated between six and 14 women during his time on the floor. There are currently eight women members, including Samantha Shandrow, a first-year software engineering major.

“When I came for a tour, I loved everything I saw,” says Shandrow. “The projects we work on aren’t assigned and they’re not part of a class. We work on them because they are fun or because we see a need for it.”

Shandrow says she isn’t intimidated by being in the minority—nor does it bother her. “The guys are great fun to be around,” she says. “It’d be cool to have more girls, but it’s not a necessity. The way I look at it, we’re not missing out. The other girls are the ones missing out.”

Each member is required to complete a major project at some point in the academic year. Crawford’s research and development team oversees and coordinates each of them. The group meets on Thursday nights to receive progress reports and allow members to offer each other suggestions. The team also allocates Computer Science House funds, which are derived from member dues ($35 for on-floor members and $30 for those who live off the floor), for the purchase of project materials.
Crawford says there is rarely a shortage of project ideas.

“We’ll have brainstorming events where we just kind of throw ideas out there and work off of them,” he says. “A lot of them start off as silly projects, but they quickly evolve into something serious once we find an actual use for them.”

The use often serves the entire university. Computer Science House created Schedule Maker, a popular software program that students use to map out their quarter during the registration process. The house is currently in discussions with the Residence Hall Association to create a washing machine usage system that would allow residents to monitor the nearest washing machines from their computer to see which ones are in use and how much time is left before they become available.

Innovation is just one aspect of the Computer Science House experience. The social bond that develops over the years is equally important.
Nicknames abound. Second-year student Geoff Hotchkiss is known as “Numbers.” Why? He’s a math major.

“It’s a family-like atmosphere. People leave their doors open. We socialize.” says Green. “At any point in the day or night, someone can call a food run—whether it’s on or off campus—and anywhere from three to 40 people will go with them.”

While most on-campus residents leave the residence halls in favor of on- or off-campus apartments as they become upperclassmen, most Computer Science House members, like Green, remain on the floor. “I like seeing the new classes come in, watching them learn and get involved—getting people to fall in love with this place that I’ve really come to love and appreciate,” Green says. “I have 60 friends here. I have no reason to leave.”