RIT at the Fringe

Rochester Institute of Technology students, faculty, staff — and even the president and his spouse — are among a 10-day lineup of more than 500 eclectic performances in this year’s First Niagara Rochester Fringe Festival, Sept. 17-26, in Rochester.

RIT is also a sponsor of the community collaborative event, now in its fourth year. The festival is a celebration of the performing and visual arts in downtown Rochester, featuring world-renowned performers as well as up-and-comers. 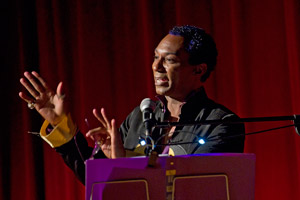 All RIT-related events are free and will be held at Gallery r, 100 College Ave.; Little Theatre and the Little Café, 240 East Ave. Some performances at other venues may require tickets, which will range from $3 to $25.

New from RIT this year is RIT’s Photo House, an exhibit of photographs taken by students who live in a special-interest housing community; a performance of The Sunshine Group, a band which won the 2014 RIT Battle of the Bands competition; and The Accidental Magician, a performance of The Great Hardini which combines tricks, comedy and original music.

An art exhibit, Theater of War, features images of war and a performance of how contemporary conflict is absorbed in popular culture. Players will use realistic-looking pellet guns and create narratives based on news accounts of current conflicts.

The theme of this year’s event is “unordinary,” and festival headliners, announced Tuesday morning at a press conference, include Rimini Protokoll, a German theatre company performing Remote X, which will take up to 50 people on a trek around the city via directions on headphones. Rochester is only the second U.S. city to host the production. Other headliners include Grounded Aerial, which will perform on the metal sculpture at Martin Luther King Jr. Park at Manhattan Square as well as the neighboring 21-story HSBC Plaza; Upside Downton recreates more than 30 Downton Abbey and celebrity characters in Kilbourn Hall; and Gospel Sunday, featuring noted Gospel artists and singers from Rochester-area churches, will also be held in Kilbourn Hall. 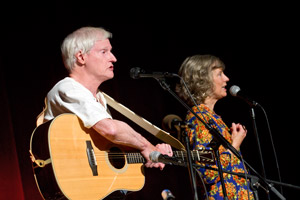 And the Spiegelgarden, an urban pop-up lounge, will return with events including free outdoor movies and productions taking place in parked cars, pup tents and a hot tub.

“The First Niagara Rochester Fringe Festival brings artists to our city who are not afraid to think outside the box and take risks,” said Rochester Mayor Lovely A. Warren. “Events like this improve the quality of life in Rochester, which helps us create more jobs, safer and more vibrant streets, and better educational opportunities for our citizens.”

Luane Davis Haggerty, director of Dangerous Signs, said it’s important to be part of such a large community art event.

“One of RIT’s missions is innovation,” she said. “Fringe theater is innovation at its finest, so having students involved and exposed to a level of experimental and experiential theater opens new pathways for them.”

Here’s a sampling of other RIT festival offerings:

For a complete schedule of RIT Fringe events (and notations on interpreted performances) as well as the shuttle schedule to and from RIT, go to www.rit.edu/gcr/fringefest or contact RIT Director of Special Events, Lynn Rowoth, at 585-475-7408 or lynn.rowoth@rit.edu.