Craft activism in the Trump Era on exhibit in ‘Crafting Democracy’

Catalog published by RIT Press with support from Farash Foundation

Handcrafted pussyhats, subversive embroidery (“resist”), protest banners and quilts are among the politically charged textiles inspired by the rise of President Donald Trump, and they are the focus of a new exhibit and catalog curated by two Rochester Institute of Technology professors.

Crafting Democracy: Fiber Arts and Activism explores “craft activism” and the 2016 presidential campaign between Trump and Hillary Clinton, and the post-election aftermath. Thirty works by local, national and international contributors express outrage over gender and racial injustices through the language of yarn, thread, embroidery floss, silk, cotton, linen, wool and other materials. 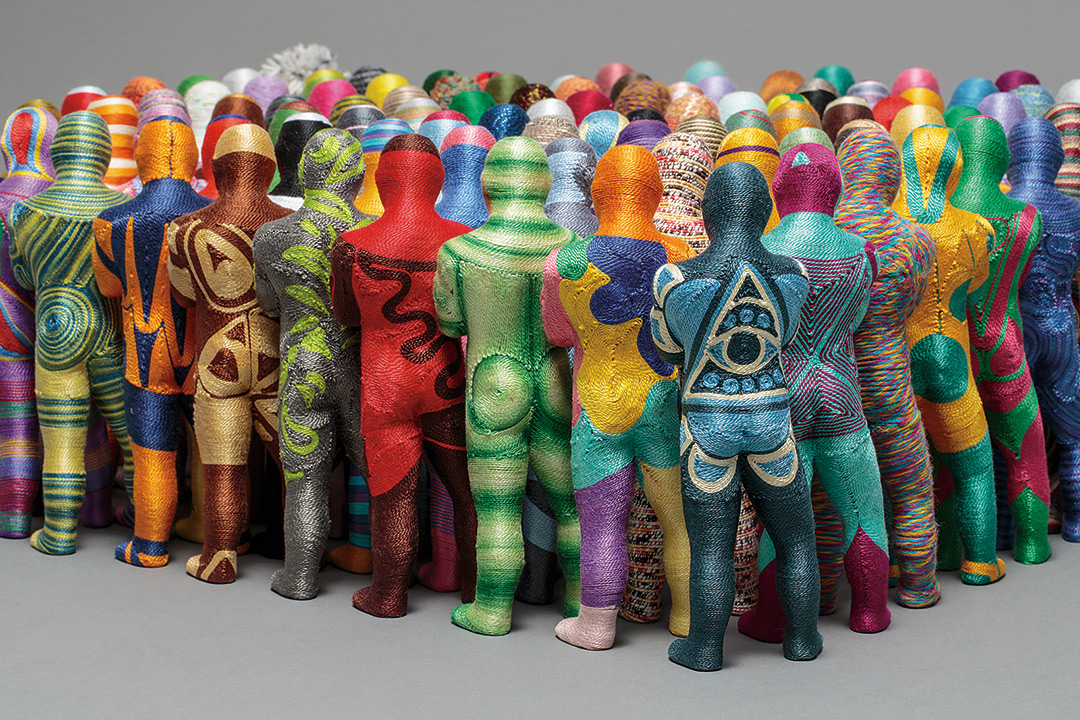 “Craft has a long history, particularly among women, as tools to express their voice in the political arena,” said Hinda Mandell, associate professor in RIT’s School of Communication. “Through the exhibition ‘Crafting Democracy: Fiber Arts and Activism,’ we seek to continue the dialogue about how the process of making can reflect people’s voices—from all demographics and backgrounds—in the political arena.”

Curators Mandell and Juilee Decker, associate professor of museum studies, worked with RIT Press to provide a broad context of craft activism or “craftivism,” a term popularized by writer and crafter Betsy Greer.

The commemorative catalog, Crafting Democracy: Fiber Arts and Activism—published by RIT Press and supported, in part, by a grant from the Farash Foundation—explores the surge of “fiber-based craft activism” from 2015 onward and documents the juried exhibit. Essays written by artists and museum curators validate craftivism as a social movement that critiques through contrast. One of the most recognizable recent examples is the cat-eared hats worn by protestors during the televised Women’s March on Washington in January 2017. While one pussyhat stands alone, thousands demand attention, and the sea of pink pussyhats symbolized solidarity in support of women’s equality and reproductive rights. 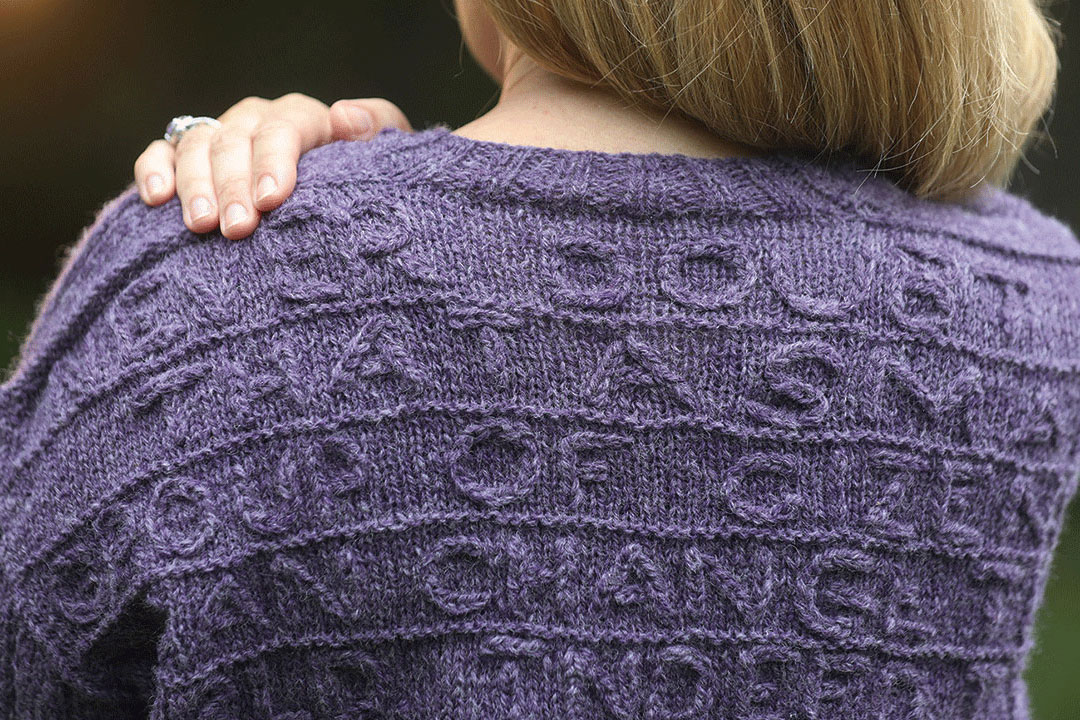 “The fact that the crafting of pussyhats created a worldwide run on pink yarn demonstrates that people turn to craft as a mechanism to enact change and express dissent when politicians, political parties, and political legislation seek to trample on human rights and human decency,” Mandell said.

Crafting Democracy: Fiber Arts and Activism, grew from Mandell’s experience as a craft activist and includes her commentary on the role of hats in American political culture, from the Pussyhat to the Trump campaign cap. (Her next book, Crafting Dissent: Handicraft as Protest from the American Revolution to the Pussyhats, is due out in October by Rowman & Littlefield.)

Mandell teamed up with Decker, a museum studies scholar and curator at RIT, to build an exhibit that would “offer a range of expression that demonstrates how fiber, art and activism can be employed to raise concerns, to fight injustice in sociocultural, political and economic issues.” 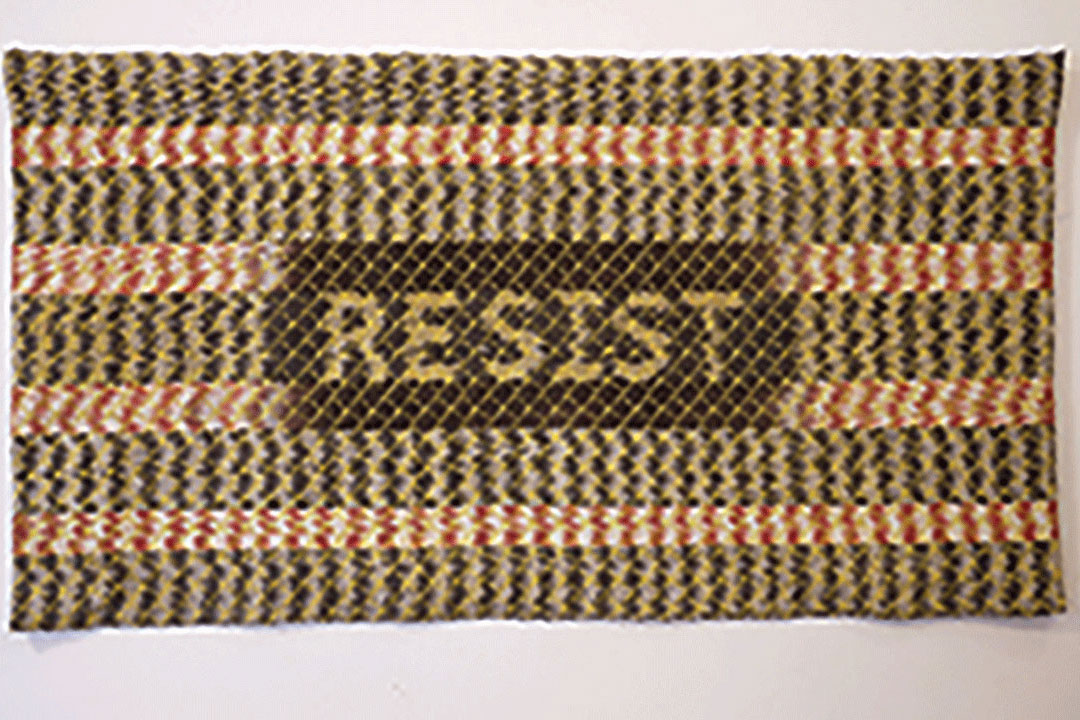 The exhibit is relevant to Rochester’s legacy of social engagement, Decker said. “Susan B. Anthony and Frederick Douglass called Rochester home and built networks that sought to make good on the promises of democracy and reform,” she said. “Their suffragist and abolitionist work was conducted while residents of this city, and they are buried at Mount Hope Cemetery. Their spirits are cultivated in our exhibition where themes of democracy, activism, social justice and human rights reflect unique local roots but also plunge into the 21st century.”

“Crafting Democracy: Fiber Arts and Activism” will be on view Aug. 1 through Oct. 25 in the Anthony Mascioli Gallery in Hacker Hall on the first floor of the Rundel Memorial Library Building, Central Library of Rochester and Monroe County, with a reception from 4 to 6 p.m. Sept. 16. (The art opening coincides with the Rochester Fringe Festival, a visual and performing arts event, held Sept. 10-21 in downtown Rochester, featuring local, national and international artists including the RIT’s arts community.)

Holding the exhibit at the public library in Rochester, N.Y., reinforces the symbolic and historic connection, Decker said.

“The gallery is a dream space—it’s historic (initially constructed as a WPA building), timeless, accessible and inviting,” Decker said. “Because the space is nestled in the Central Library, which is free and open to the public, everyone in our community has access to the exhibition, without any barrier to entry. Its context also reflects the themes of our exhibition.”