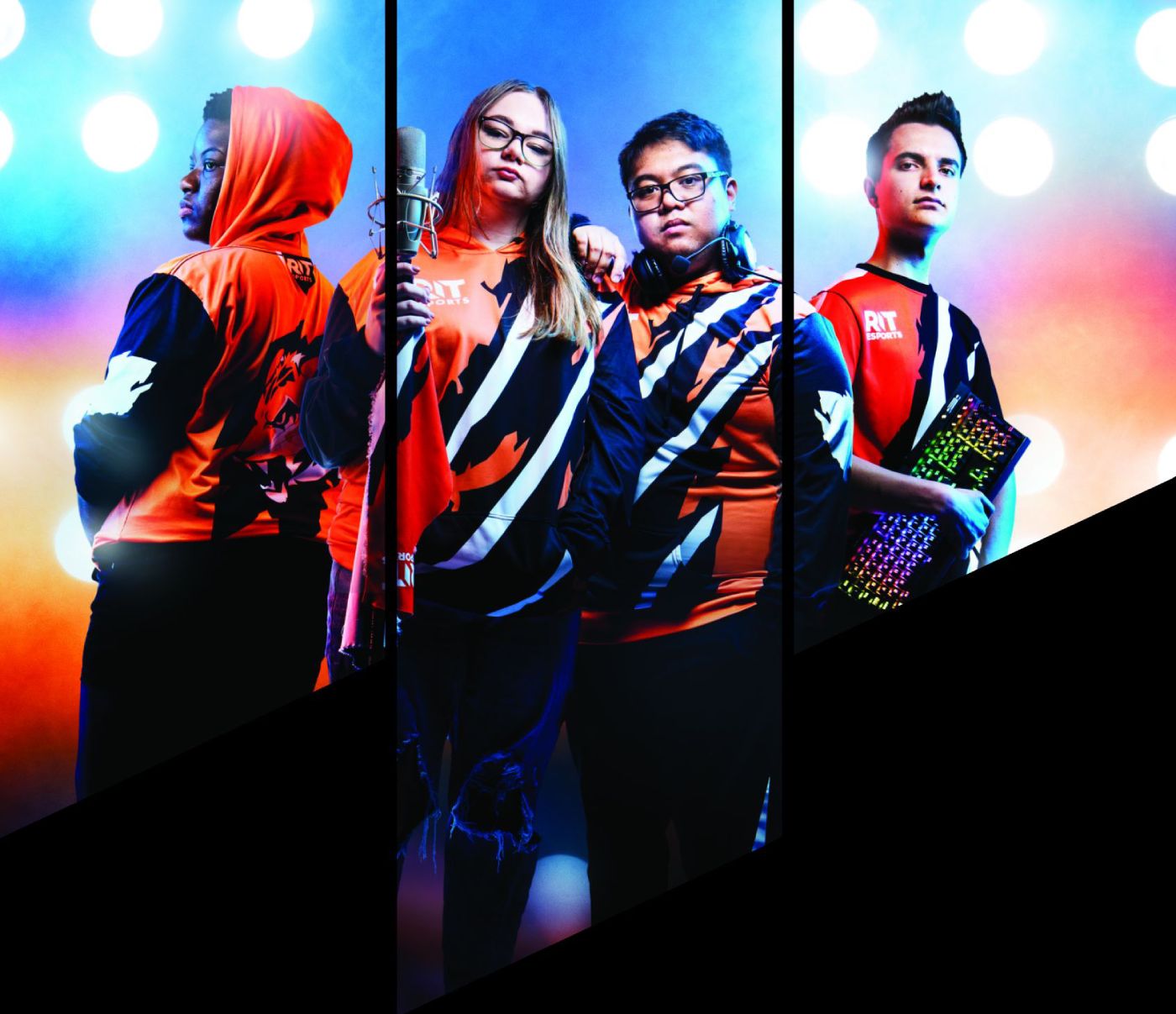 MORE THAN A GAME

It’s game day. Sam Burgoyne is getting in the right mindset for his 8 p.m. league match against The Ohio State University.

As a player and assistant manager on RIT’s Rocket League team, Burgoyne wants to perform at his highest level. The third-year game design and development student is all caught up on his class assignments. Now, he’s off to eat a good meal and go over game strategies with his teammates.

More than five days a week, Burgoyne is facing off against the best collegiate esports teams in the nation. Last spring, thousands of viewers tuned in to watch his team in a top collegiate tournament for Rocket League—a video game that is best described as soccer with rocket-powered cars.

“Being competitive is a big part of who I am—ever since I won two national esports championships with my friends in high school,” said Burgoyne, who is from Ridgewood, N.J. “Esports is actually the reason I chose RIT over other universities. I joined the club before I even got to campus.”

Hundreds of millions of people around the globe are engaging in electronic sports, called esports. It’s a billion dollar industry, where fans watch as their favorite professional and amateur players take each other on in some of the most popular video games. 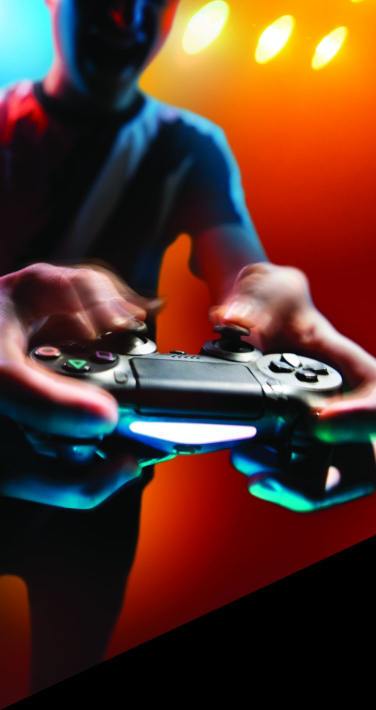 Since starting an esports club in 2016, RIT has become one of the nation’s largest and best collegiate esports programs. With nearly 300 players and more than 2,000 community members, RIT Esports is bigger than many college athletics programs.

RIT Esports currently plays in 18 different video games, including CS:GO, Hearthstone, and the most recent addition—Splatoon 3. The program has also brought home seven national championships, and students have won more than $100,000 in prizes.

In addition to playing competitively, RIT students are getting involved with esports in many other ways. The teams have coaches and managers, while elected student administrators run the club. There are also support teams that do everything from designing the jerseys to producing live-streamed matches. For fans of video games, esports has become a great way to rally behind RIT.

Anthony Talion has learned a thing or two from his time being a top ranked player in the multiplayer online battle arena game Dota 2. Now, he’s applying those lessons to his role as president of RIT Esports.

“In Dota 2, you have to look at the larger picture—the ‘macro’—just as much as you focus on your individual reflexes and skills,” said Talion, a fourth-year biomedical sciences student from Elmhurst, N.Y. “It’s very team oriented and communication is important. We take the same approach with RIT Esports.”

What makes RIT’s program successful is its wealth of student talent and systematic approach to the organization. Because esports is not under the umbrella of the NCAA, the collegiate scene has been a little like the Wild West. There are many different games to play and dozens of tournaments and leagues to play in, including the National Association of Collegiate Esports (NACE).

To create an esport at RIT, students must make a proposal, identify viable leagues, and hold tryouts. RIT uniquely has two or three tiers of teams for each esport because the talent pool is so deep. Students typically compete in a fall and spring season for each game. Throughout the year, teams will practice at least 20 hours a week. Players also focus on staying physically and mentally healthy. 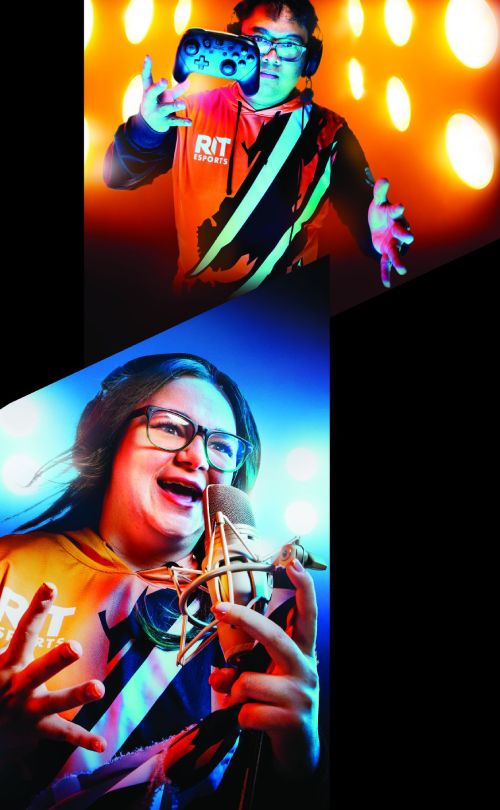 There are many ways to join RIT Esports. Anthony Talion, top, played Dota 2 and is now president of the club, while Cass Meltsch, above, analyzes the game as an esports caster.

Cass Meltsch, a fifth-year mechanical engineering student, contributes by giving a voice to esports. Throughout the past two years, she has become a top talent in Rocket League commentating—also known as casting.

Just as a sportscaster narrates a baseball game, esports casters bring extra life to online streams and live in-person events. Typically, one caster will do play-by-play, while another gives color commentary and expert analysis.

Meltsch started casting as a volunteer but is now getting paid to cast streams that get more than 20,000 live viewers. In September, she was hired to cast the Super Girl Gamer Championship, a competitive series dedicated to supporting women in gaming.

“With esports casting you’re able to interact with so many different people from all over the world and make incredible connections with genuine and nice people,” said Meltsch, who is from Barnegat, N.J. “In order to excel in casting, you need to put in the hours and have a true passion for the game.”

Casters are often required to mix humor with their expert-level knowledge of the game. That’s easy for Meltsch, who has played video games as long as she could hold a controller. She said that while she casts the top .2 percent of Rocket League players in the world, she probably plays amongst the top 3 percent.

To grow as a caster, she studies video replays to find how changing her voice tone and words can make her commentary more interesting. She is also completing a minor in communication, which helps with her casting and her project management skills in engineering. In the future, she hopes to work in aerospace engineering and freelance as a professional caster.

Last spring, Meltsch was casting games with the nation’s top Rocket League teams at the College Carball Association tournament. Luckily, she had an inside scoop on one of the teams. An RIT team was there in the top 32 bracket.

“That was a really huge step for RIT Esports and special for me personally,” said Meltsch. “It’s always exciting when you can rally behind your school.” 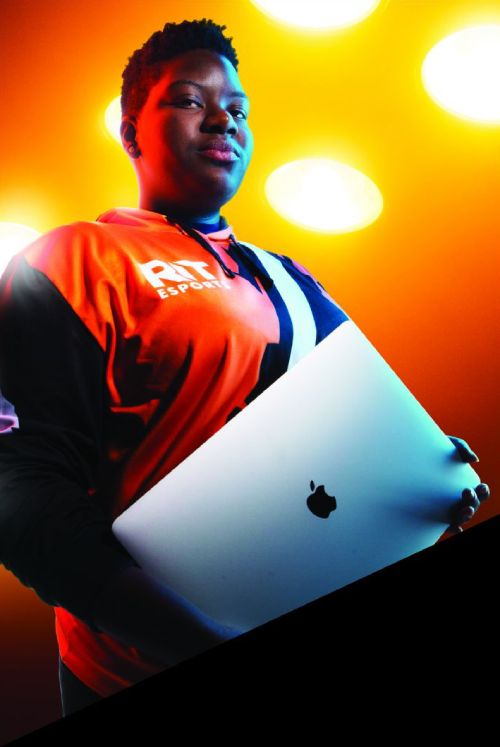 Daijya Robinson stays involved with esports behind the scenes as a member of the club’s development team.

Members can support the RIT club through social media management and community fundraising events for charity. Other students support the technical requirements of gaming and maintain esports practice facilities on campus.

When Daijya Robinson first arrived at RIT, she had heard about the esports club. However, she didn’t want to play competitively.

“I love to play games for fun and watch really good people play, but I didn’t want to compete because that’s not really my thing,” said Robinson, a second-year game design and development major from Kansas City, Mo. “I ended up meeting someone who was wearing an RIT Esports jacket and asked him what he did. I was so excited when he explained how he works on the advertising side of esports.”

Robinson now contributes as a member of the RIT Esports Development team. She designs the club website and develops new interface functions. She has also helped come up with ideas for Discord bots so people can create weekly updates and meeting reminders on the club’s messaging platform.

“We make things that are helping RIT Esports function, and that’s just as important as our great players going out there to win games for the university,” said Robinson. “I like being helpful and being a part of this community.” 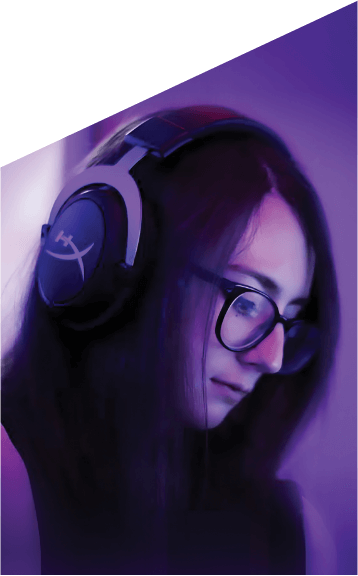 At RIT, Stevie West ’21 (film and animation) figured out how to combine her passions for esports and video editing into a career. She credits her time as production director of RIT Esports with getting her there.

As the social media and content manager for the esports production company SpaceTime Strategies, West edits video from major gaming festivals, including PAX and DreamHack. She mixes in-person and in-game footage to create hype videos for social media and clients. She also edits highlight reels as a freelancer. Her videos for popular Twitch streamers have received tens of millions of views, and counting.

Additionally, West is coach of the League of Legends team at Grand Canyon University—a college that offers scholarships for the team. As a coach, she aims to help her players stay organized, mentally focused, and healthy.

Ben Garvey ’21 (applied arts and sciences) is bringing people together for a high-end video gaming experience at Great Lakes Gaming (GLG). He is the founder and CEO of GLG, which opened a video gaming entertainment facility for all on the 22nd floor of Innovation Square, a downtown Rochester complex.

The space overlooks the city and features a dozen high-end PC stations, two private streaming booths, five console setups, and a café for gamers. He sees the lounge as a country club for local gamers, where people can compete and socialize. GLG also holds leagues and weekly tournaments. While at RIT, Garvey was a manager of the RIT Call of Duty team and chose classes focused on entrepreneurship and game design.

When Tyler Schrodt ’13 (finance and international business), ’15 (MBA) was a student, he ran esports tournaments out of his dorm room. Now, he lives in New York City and operates high school and collegiate-level leagues all across the nation.

In 2015, Schrodt founded the Electronic Gaming Federation (EGF), an independent scholastic governing body for youth, high school, and Division I collegiate esports leagues. EGF is inspired by traditional sports to create opportunities for students and schools to engage in esports.

Jacob Marcovecchio ’21 (game design and development) is helping bring together the collegiate esports scene for the video game Call of Duty. As director of internal operations at College CoD, a premier collegiate Call of Duty league acquired by eFuse, he has his hand in every part of day-to-day operations—from social media marketing to improving production packages.

Marcovecchio joined the grassroots organization as a student four years ago and helped it grow from a league of two schools to more than 200 today. He did this while also working with RIT Esports as manager of the Call of Duty team, head of graphic design, and later vice president.

Marcovecchio works remotely from Pittsburgh and most recently ran College CoD’s first in-person championship, which had eight of the best teams playing for a $25,000 prize pool.