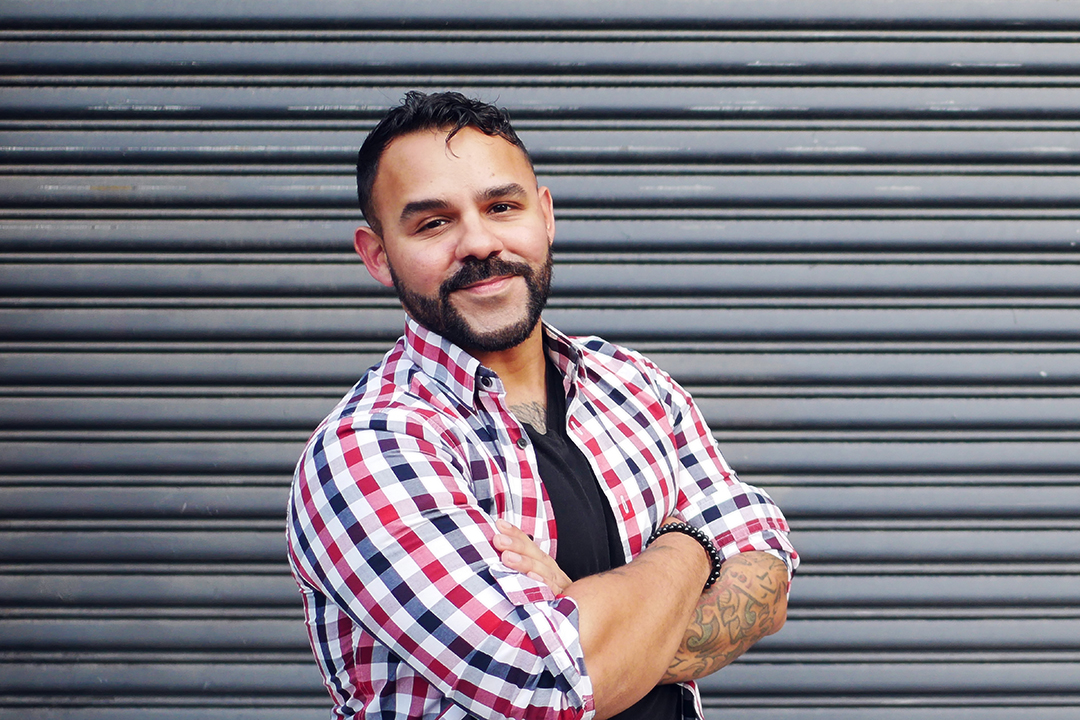 Growing as a designer, and later teaching, in RIT’s New Media Design program, envisioning the future of the industry has long been a motivator for Miguel Cardona.

“Back in the day, new media was very focused on the future,” said Cardona, an assistant professor in the program. “We were always looking at the next big thing. That’s always been the focus, especially today. So even now, when I’m teaching my classes, we spend a lot of time identifying the opportunities for design and innovation.”

Cardona was part of New Media Design’s second graduating class in 2004 before completing RIT’s Industrial Design MFA program in 2013. Today, as New Media Design faculty, he is surrounded by the very peers and mentors who helped shape him while he was a student.

“When I started teaching we were doing a lot of fundamentals, a lot of web stuff,” said Cardona, who began as adjunct faculty in the New Media Design program in 2005. “But we were also doing what is known as speculative futures where basically you outline a task that someone will be doing with a technology that isn’t quite here yet.”

Cardona has watched the industry grow and flourish over the past 15 years while making key contributions to it. He has aided the development of modern technologies by incorporating innovative thinking and creativity into his work and espousing a passionate teaching style.

From creating interactive games, websites and stunning coffee cup art to the co-founding of a digital design agency, Cardona has spread his wings far in the design and technology industries. He’s developed a wealth of knowledge throughout his well-rounded career — and is now passing that experience on to his motivated students.

For example, in the fall 2018 semester, Cardona led a professional-development course in collaboration with Rochester Regional Health. The class created the interfaces for an augmented reality (AR) navigational app that allows visitors to find their way through a hospital in a new way.

RIT New Media Design students work rigorously to identify the need for that type of technology and its specific uses. Some aspects of augmented reality, like demonstrating how AR could mask out objects, was identified and presented by students a year before Apple announced the iPhone’s capability to do so, according to Cardona.

“Our students are in high demand and a lot of that is part of this rigor that we put them through,” Cardona said. “We have a close relationship with the industry and we know what people are looking for, so we keep eyes on what they will need down the line.”

Cardona’s personal experience as an entrepreneur and innovator speaks to his knowledge of current industry standards. He is a co-founder of Dwaiter, a Rochester-based design and technology studio, and an initial hire at imgix, a digital imaging startup in San Francisco. Cardona was in on the ground floor of those companies with fellow RIT graduates while both have consistently employed New Media Design alumni, further outlining the family-based nature of the program and how well it prepares students.

“I am in a Slack (communication software) channel filled with alumni and we engage regularly,” Cardona said. “A lot of my companies’ client partnerships are through alumni. Creative Industry Day, for example, is massive for us because it’s basically all of my former students behind those tables. We really work hard to make it feel like a family.”

RIT’s annual Creative Industry Day, sponsored by the Office of Career Services and Cooperative Education, provides students and alumni with the opportunity to network with and receive portfolio reviews from dozens of companies throughout the U.S.

The New Media Design program’s employment rates and starting salaries of graduates are routinely high due to students’ exposure to industry, opportunities to create real-world solutions and collaborations with other disciplines. Students regularly intern and work full-time at notable companies such as Adobe, Apple, Facebook, Google, Instagram, Lyft, Microsoft, Netflix and YouTube.

“In New Media, we teach and are taught to be comfortable with many skills,” Cardona said. “We’re graphic designers, we’re illustrators, we’re marketers, we’re animators and 3D moderators. We have the confidence to jump into whatever we want to jump into.”

Cardona’s passion and expertise work hand-in-hand to motivate his students and push the program to further success.

“We’re all just trying to impress each other with what we can do and what we can accomplish,” Cardona said. “We encourage digging into mistakes, and playing around with stuff. We set the expectations really high and what comes of that is just incredible.”