‘Jewel of the Sports World’ released by RIT Press 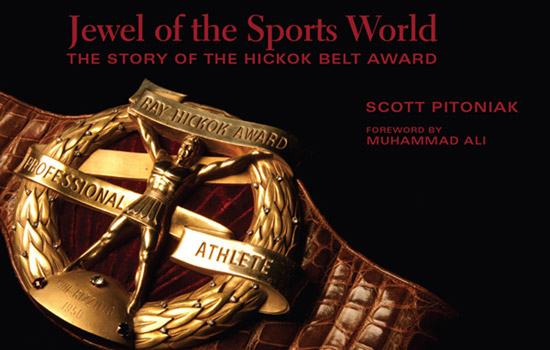 Jewel of the Sports World: The Story of the Hickok Belt Award is published by RIT Press.

For a quarter century, the winner of the S. Rae Hickok Professional Athlete of the Year award received the most renowned prize for sports in America. It was the Hickok Belt—an alligator-skin belt with a 5-pound, solid gold buckle encrusted with diamonds, rubies and sapphires.

“I’ve received many, many awards, but this is the greatest tribute paid any athlete,” said Red Sox MVP outfielder Carl Yastrzemski after he became the victor in 1967.

Nationally recognized sports columnist and author Scott Pitoniak tells the story of the award, the winners and its history in Jewel of the Sports World: The Story of the Hickok Belt Award. The book includes a foreword by Muhammad Ali (who won in 1974) and is published by RIT Press, a scholarly publishing enterprise at Rochester Institute of Technology.

“The Hickok is a fascinating slice of not only Rochester’s sports history but national sports history,” Pitoniak explains. “From the year 1950 to the last time it was presented in 1976, the bejeweled belt was the most coveted individual award for a professional athlete.

“I equate it to winning an Academy Award, a Tony or an Emmy; it told the sports world you were the best of the best. The Hickok award also put Rochester on the map.

“For one night a year the city hit big league status, and iconic sports stars and even sportscasters like Howard Cosell would come to watch the Hickok presentation at the Rochester Press-Radio Club’s annual charity dinner.”

Jewel of the Sports World takes readers back in time to the Hickok Manufacturing Company and the family who decided to design the trophy in memory of their father and his love for sports. In a tribute to the era, Pitoniak gives an overview of historical trivia surrounding each decade, focuses on the mover-shakers in the sports arena, and offers details on the athletes who either won or lost their chance to win the prestigious belt. He also includes informative, quick-read sidebars, one of which answers the question: “What would it cost to make the belt today?”

In the final chapter, Pitoniak—who was honored by The Associated Press as one of the top 10 sports columnists in America—offers his own perspective on the breakdown of the 27 Hickok Belt winners and who might have won if the award had continued.

“Baseball dominated the Hickok voting during the ’50s, ’60s and ’70s, with football in second place, boxers in third and golfers fourth,” Pitoniak says. “Basketball and hockey players were shut out.

“But now there’s changing attitudes towards sports and towards female athletes who have never won the award. My picks through the years would have included golfer Nancy Lopez in 1978 and Serena Williams for tennis in 2002. And I believe cyclist Lance Armstrong would have won in 2006, and gold medal Olympic swimmer Michael Phelps would have been considered a professional and therefore would have won in 2008.”

The softcover edition of Jewel of the Sports World is available for purchase for $24.95 at the RIT Press website, or by calling RIT’s Cary Graphic Arts Press at 585-475-6766. The author is available for media interviews and can be reached directly at 585-739-7843 or spitoniak@aol.com.

Note: The Belt is back: City of Rochester Mayor Robert Duffy announced the Hickok Belt Award would be reinstated and the first dinner will be held next September at the Riverside Convention Center in Rochester. The voting format will remain the same, with 12 monthly winners—male or female—eligible to win that year’s award and the Hickok Belt.