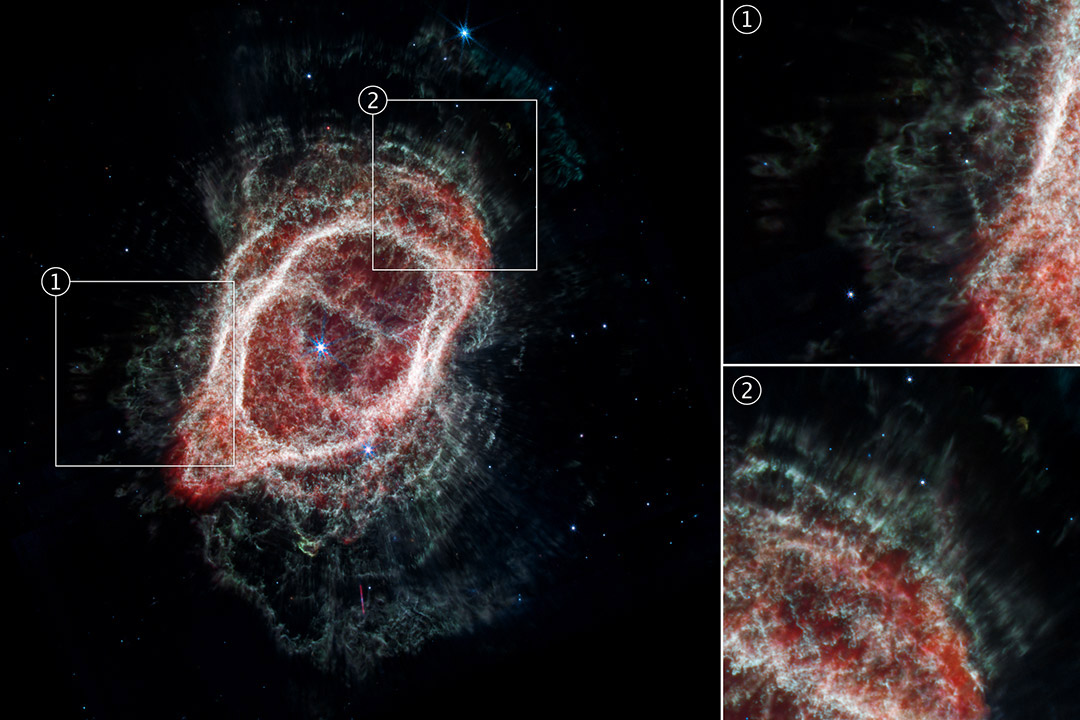 Straight, brightly lit lines pierce through the rings of gas and dust around the edges of the Southern Ring Nebula in the James Webb Space Telescope’s image. These “spokes” appear to emanate from one or both of the central stars, marking where light streams through holes in the nebula. A research team projects that the straight lines may have been shot out hundreds of years earlier and at greater speeds than those that appear thicker and curvy. It’s possible the second set is a mix of material that slowed, creating less linear shapes. In this image, blue and green were assigned to Webb’s near-infrared data taken in 2.12 and 4.7 microns (F212N and F470N), and red was assigned to Webb’s mid-infrared data taken in 7.7 microns (F770W). Credits: NASA, ESA, CSA, and O. De Marco (Macquarie University). Image processing: J. DePasquale (STScI)

Scientists have reconstructed what they call “the messy death of a multiple star system” using some of the first images from NASA’s James Webb Space Telescope, plus existing data from the European Space Agency’s Gaia observatory. RIT scientists contributed to a Nature Astronomy paper outlining how the Southern Ring Nebula received its unique shape.

Planetary nebulae are the remnants of stars roughly one to eight times the size of the sun surrounded by hot gas lit up by ultraviolet radiation. The researchers’ calculations show the central star was nearly three times the mass of the sun before it ejected its layers of gas and dust.

“This star is now smaller and hotter, but is surrounded by cool dust,” said co-author Joel Kastner, a professor in RIT’s Chester F. Carlson Center for Imaging Science and School of Physics and Astronomy. “We think all that gas and dust we see thrown all over the place must have come from that one star, but it was tossed in very specific directions by the companion stars.”

Before the dying star shed its layers, the team proposes that it interacted with one or even two smaller companion stars. During this intimate “dance,” the interacting stars may have launched two-sided jets, which appeared later as roughly paired projections that are now observed at the edges of the nebula.

The complex shapes of the Southern Ring Nebula are more evidence of additional unseen companions – its ejections are thinner in some areas and thicker in others. A third closely interacting star may have agitated the jets, skewing the evenly balanced ejections like spin art. In addition, a fourth star with a slightly wider orbit might have also “stirred the pot” of ejections, like a spatula running through batter in the same direction each time, generating the enormous set of rings in the outer reaches of the nebula. A fifth star continues to orbit the dying star slowly, predictably, and calmly.

Other RIT researchers contributing to the study included astrophysical sciences and technology Ph.D. student Paula Moraga; astrophysical sciences and technology Ph.D. alumni Jesse Bublitz ’20 and Rodolfo Montez Jr. ’10; and Jason Nordhaus, faculty member in the Department of Science and Mathematics at RIT’s National Technical Institute for the Deaf and researcher at the Center for Computational Relativity and Gravitation.

“The Southern Ring Nebula is a prime example of how additional stars or planets in a system, whether seen or unseen, directly impact stellar death and impart their signatures to the nebula,” explained Nordhaus.

The images of the Southern Ring Nebula released last summer were among the first wave of full-color scientific images and spectra JWST has gathered, and the official beginning of its general science operations. A team of almost 70 researchers led by Orsola De Marco of Macquarie University in Sydney, Australia, analyzed Webb’s 10 highly detailed exposures of this dying star to produce these results. To find out more, go to Webb Space Telescope website. 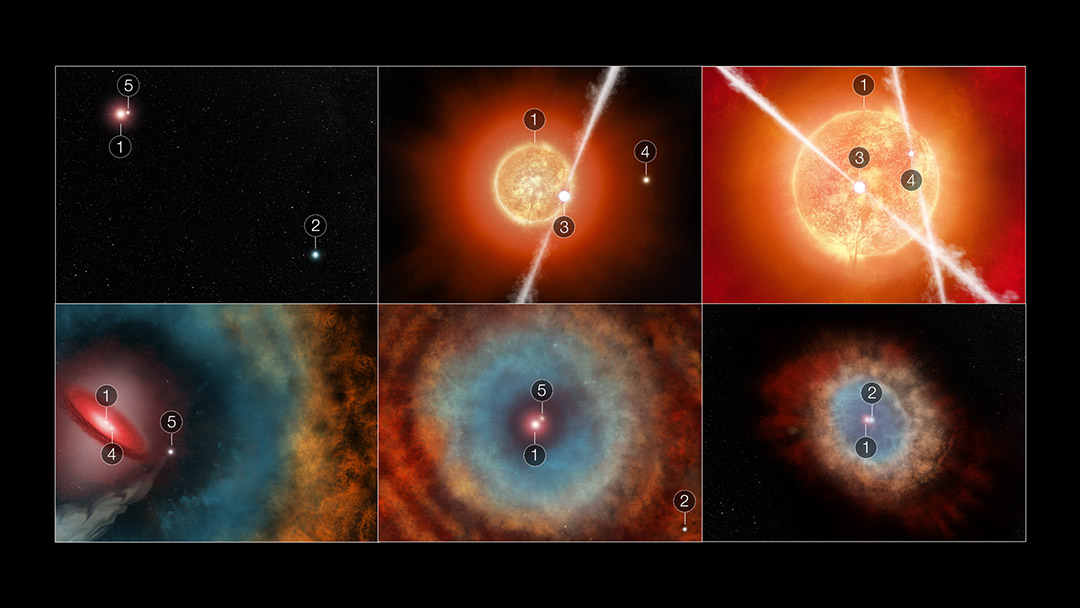 How did up to five stars create the Southern Ring Nebula? Panel 1 shows a wider field with stars 1, 2, and 5, the last of which orbits star 1 far more tightly than star 2 does. Panel 2 zooms way in on the scene, and two other stars (3 and 4) appear in view; star 3 is emitting jets. Panel 3 shows star 1 expanding as it ages. Both stars 3 and 4 have sent off a series of jets. In panel 4 we zoom out to see how light and stellar winds are carving out a bubble-like cavity. Star 1 is surrounded by a dusty disk. In the fifth panel, star 5 is interacting with the ejected gas and dust, generating the system of large rings seen in the outer nebula. The sixth panel portrays the scene as we observe it today.