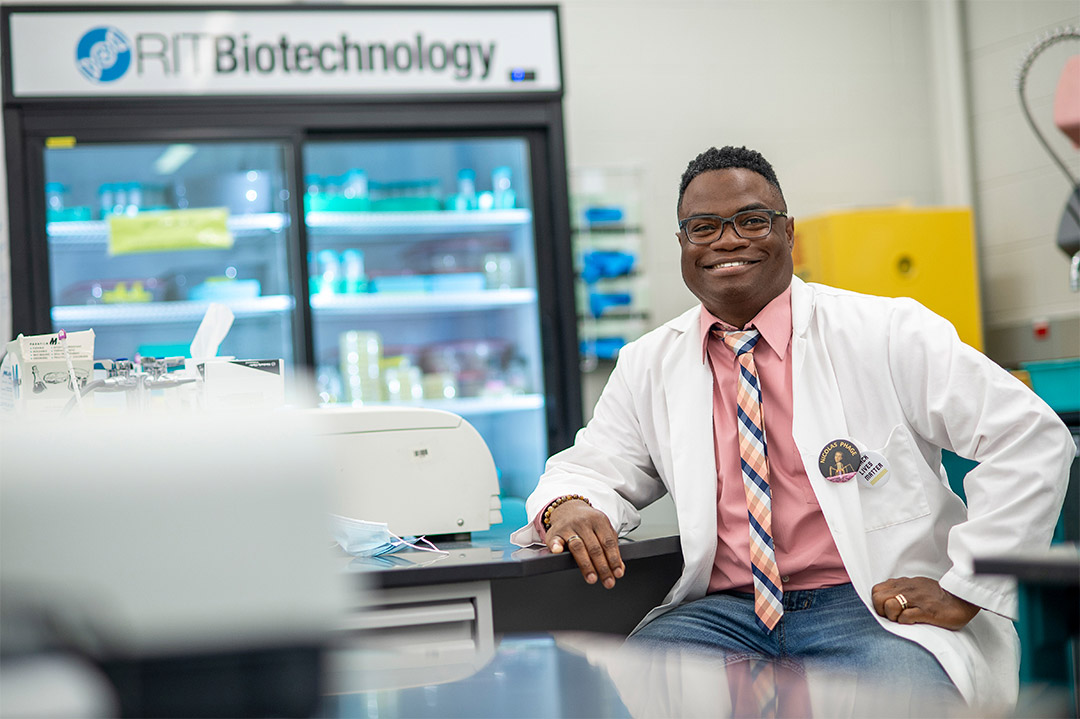 Professor André Hudson, head of the Thomas H. Gosnell School of Life Sciences, received a $443,583 grant from the National Institutes of Health’s Department of Health and Human Services to isolate, identify, and characterize novel antibiotics

A team of Rochester Institute of Technology scientists is attempting to uncover novel antibiotics that could fight the growing threat of multidrug-resistant diseases. Professor André Hudson, head of the Thomas H. Gosnell School of Life Sciences, received a $443,583 grant from the National Institutes of Health’s Department of Health and Human Services to isolate, identify, and characterize new antibiotics.

A 2019 report from the Centers for Disease Control and Prevention estimates that more than 2.8 million antibiotic-resistant infections happen in the U.S. annually, resulting in more than 35,000 deaths. Hudson said that while bacteria have naturally developed resistance to antibiotics over time through evolution, stewardship issues exacerbate the problem, such as when doctors prescribe antibiotics for viral infections or when antibiotics are overused in animal husbandry and farming.

“The antibiotics we currently use have worked really well for such a long time that companies didn’t have much of an incentive to go back and develop new drugs,” said Hudson. “But when bacteria are overexposed to antibiotics, it’s almost like tipping our hand and training them how to deal with our approach. So we need to reinvest in research and develop new antibiotics to combat this problem.”

Hudson said this project will build on the work of Post-Doctoral Associate Anutthaman Parthasarthy and two recent biotechnology and molecular bioscience alumnae, Nicole Cavanaugh ’20 and KayLee Steiner ’20. As undergraduates, they isolated, sequenced, and annotated the genomes of bacteria found in the soil and water on RIT’s campus and observed genomic signatures indicating the bacteria may produce novel compounds that could inhibit pathogenic bacteria resistant to antibiotics that are currently used in clinical settings. These initial studies were published in two separate manuscripts.

The funding will allow Hudson and a team of new undergraduate and graduate College of Science students to investigate further. Hudson said he is excited to engage RIT students in research that can help address long-term threats.

“Part of the joy of my job is to try to inspire the next generation to be ready to solve problems that I don’t even know exist yet,” said Hudson. “They should have the aptitude, competency, and the interest and passion to tackle whatever issues arrive in that space.”