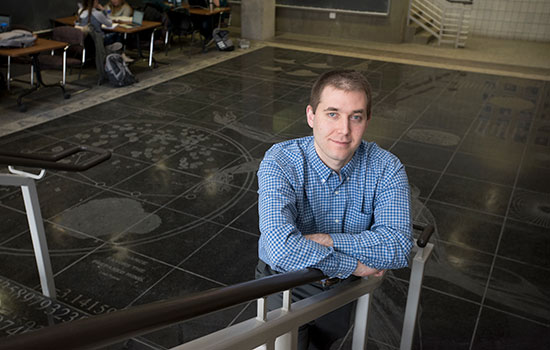 Nathaniel Barlow, winner of RIT's Richard and Virginia Eisenhart Provost's Award for Excellence in Teaching and the Innovative Teaching with Technology Award.

Nathaniel Barlow is part professor, part performer in RIT’s School of Mathematical Sciences. His playful teaching style and insightful techniques have earned him the Richard and Virginia Eisenhart Provost’s Award for Excellence in Teaching and the Innovative Teaching with Technology Award.

Barlow was “over the moon” when he won the first award and in disbelief upon word of the second.

“I’m glad to be at a university that acknowledges teaching,” said Barlow, assistant professor. “You don’t really get a lot of external validations in teaching, and getting an award is rare.”

He seeks ways to connect with his students and create memories in the classroom that help them retain the material. He inserts fun-loving antics into his lesson plans—donning a wizard costume on Halloween; seeking answers from a hand-held, speaking Yoda toy; and using mathematical puns like plastic lemons labeled “Watson Lemma.” (Pun explained: Watson: George Neville Watson was an English mathematician b. 1886; Watson Barlow is the second-born son of Nathaniel and Stephanie, b. 2017; and Lemma: a short intermediate theorem.)

For Barlow, the delivery is as fun as the subject matter. “I feel that I can provide an experience for students that they can’t get while watching a YouTube video or even by reading their textbooks,” he said.

Entertaining comes easily to Barlow. He played guitar and drums in several heavy metal rock bands during high school and overcame stage fright in his teens. Barlow recognizes a familiar pattern in planning, rehearsing and performing in front of people. Back then, it was Metallica and Judas Priest; now, it’s fluid dynamics and calculus.

“It’s the same as planning a math lecture,” he said. “You plan the notes, you put everything in the right order—sometimes you lead with an element of suspense at the beginning to get students interested, and in the end there’s a payoff and you go and deliver it. And—if you’re not teaching multiple sections—it’s a one-time thing, so you want to make it as best you can. After the lecture, it’s done.”

Underneath the delivery, his lesson plans are grounded in two core concepts: creating an inclusive classroom and meeting students where they are with math and building them up.

“If a student isn’t part of a group that knows each other in the classroom, they might not speak up,” Barlow said. “That’s a barrier I try to overcome.”

He also strives to make his material accessible to his students. “I don’t believe in innate mathematical ability,” he said. “I believe in incremental learning, and that’s how I teach.”Barlow began teaching mathematics in 2008 while earning his Ph.D. in mechanical engineering at Clarkson University. When his research funding ran out, the math department hired him as a full-time professor. The heavy load of math courses his thesis adviser had required prepared him for an unexpected path that changed his career. “I loved it,” he said. “I knew in my heart that I wanted to teach math.”

His engineering background shines through his lesson plans. “Everything must have a purpose,” he said. “I teach with many applications from my background. It’s an extra thing. The math is the focus and the physical applications are the icing on the cake.”

When Barlow joined RIT in 2014, he already had an ongoing collaboration with Steven Weinstein, professor of chemical engineering in the Kate Gleason College of Engineering. They established the Barlow/Weinstein Asymptotics and Wave Instability Group and hired an interdisciplinary team of undergraduate students in applied mathematics, computational mathematics, chemical engineering, industrial engineering and, most recently, from the mathematical modeling Ph.D. program.

The first award recognizes Barlow’s talent in the classroom—his ability to connect with students, convey content and inspire. The Innovative Teaching with Technology award honors his clever use of technology to convey difficult concepts.

Math problems that involve 3D surfaces and vector fields require spatial thinking and are not easy for everyone to grasp. Barlow taught the complex equations using 3D glasses and red/blue slides until the semester a student introduced him to 3D printing.

Colin Huber, now a student in the mathematical modeling Ph.D. program and a member of the Barlow/Weinstein Asymptotics and Wave Instability Group, came to class every day with a different 3D-printed object. Huber and other students taught Barlow how to make 3D-printed models of three-dimensional equations. Since then, the palm-sized plastic models have replaced the 3D glasses.

“You can feel how the solution of a differential equation or a calculus problem behaves. I think it’s powerful.”

Barlow won the Innovative Teaching with Technology award for adapting the technology as a teaching tool in his undergraduate courses.

Barlow, Huber and Montmayeur published their findings in “Riding the ‘wave’ of Affordable 3D Printing: Applications to PDEs in teaching and research,” in the Dynamical Systems Web, in November 2017.

“Students can visualize a mathematical concept and hold it in their hands,” Barlow said. “It creates a tactile learning experience. Being able to rotate it and see it from different sides, that’s really where the novelty is.”