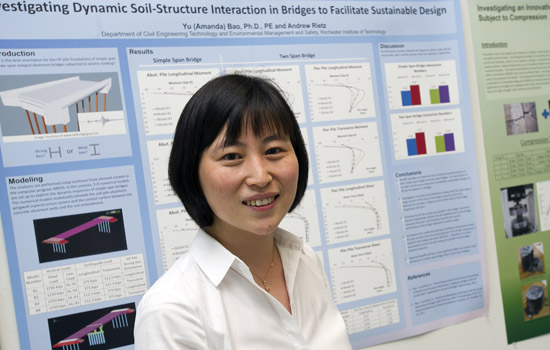 H comes before I in the alphabet—and when referring to bridges.

A new study by researchers at Rochester Institute of Technology indicates that a 180-degree shift in the direction of the H-steel pile foundations in bridges could add new life to the structure and increase load resistance and capacity—even in the event of earthquakes or tsunamis.

The recent report by the American Society of Civil Engineers gave U.S. infrastructure low marks, highlighting roads and bridges across the country considered structurally deficient. The likelihood of older bridges remaining serviceable takes on a different perspective when earthquakes or tsunamis are added to the mix, Bao says.

“Highway bridges need to remain operational after a disaster to allow for continued evacuation and an effective emergency response,” she adds, “therefore the bridge response to extreme loading conditions is critical.”

Bao’s research findings indicate that re-orientating the piles directionally—from an “H” bearing to an “I” orientation—increases bridge response to extreme load conditions and could increase the service life of the bridge structure. Results from the numerical simulations are detailed in her research, “Investigating Dynamic Soil-Structure Interaction in Bridges to Facilitate Sustainable Design.”

“There’s always been a question about how to orient the piles, so my research is the first step to find out what the difference is between the two orientations,” says Bao. “I noticed by comparing structural capacity, we definitely know which orientation is better. We also noticed that soil has significant contribution to the resistance to earthquakes, which is ignored in current design practice.”

The work could also make an impact in the national conversation about the need for improved infrastructure—bridges, culverts, roads and highways—across the U.S. The average age of bridges in the U.S. is 42 years old, and one in nine of the nation’s bridges were categorized as “structurally deficient,” according to the ASCE.

“We need to be sure bridges are remain operational after earthquakes. If the earth is scoured away, only the piles will resist the load,” says Bao. “In that case, we need to figure out which orientation is better. I want to find one orientation to survive both, an earthquake and a tsunami.”

Tsunamis often follow earthquakes. The rushing water disrupts soil around the base of bridges, and through Bao’s work, the combination of soil resistance and pile resistance is being explored together.

Prior to coming to RIT, Bao worked as a design engineer for Jacobs Engineering Group, based in Denver, Colo. Bridge design criteria varied from state-to-state. Her current work focuses on bridge design in seismic zones, and is supported by an RIT Provost’s Grant/Strategic Acceleration of Research Award.

Sustainable design theory is becoming popular as an alternative to meet the demand for increasing the lifecycle of bridges and other foundation infrastructure. Bao has incorporated aspects of using sustainable materials such as hybrid nano-fibered concrete into the structural design process. By understanding how these two elements are related, design engineers will be better able to understand how the bridge behaves during earthquakes – and they can build structures that survive, she explains.

“Sustainable design has three aspects for bridges. The first is to reduce the materials used. The second is to increase the service life so it can survive disasters, and third, to simplify deconstruction. When a bridge is out of service, we can recycle material.”