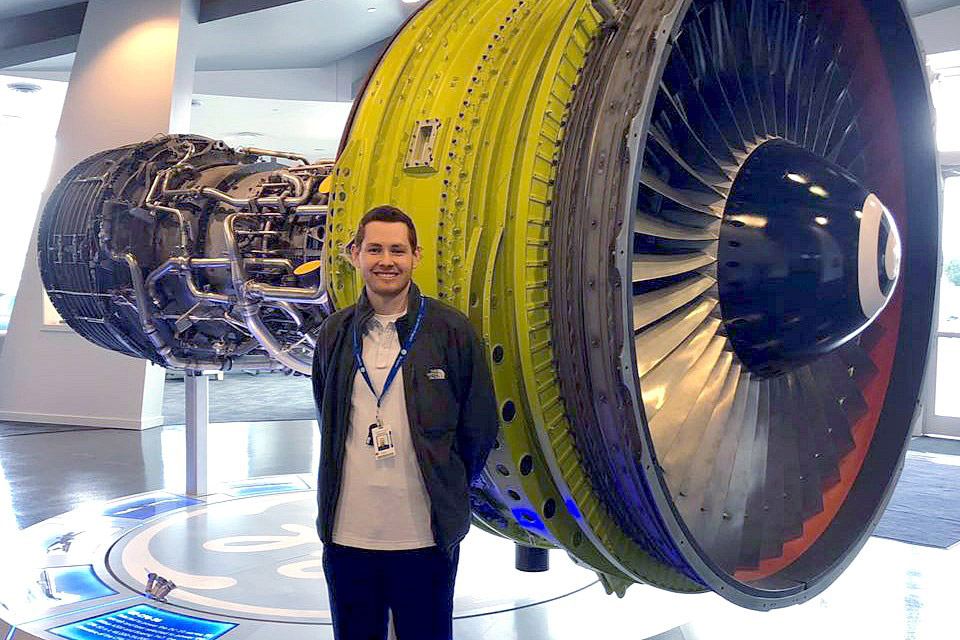 Bradley Speck, receiving his bachelor’s degree in mechanical engineering, has a job waiting for him at GE Aviation in Cincinnati, Ohio.

Bradley Speck, Anita Balaji, Eric Hartman, Lizzy Carr and Sean Mahaney were expecting to walk across the stage this weekend with more than 4,300 Rochester Institute of Technology students—a record number of graduates.

Instead, they will be celebrating at home with their families or friends.

Today’s celebration of the Class of 2020 certainly cannot replace the atmosphere of a traditional commencement, which RIT plans to host on campus when it’s deemed safe. But many of the graduates taking part in in today’s virtual ceremony, necessitated by the COVID-19 pandemic which requires social distancing, say they won’t let the pandemic, or the circumstances surrounding the virtual celebration, define them or their feelings about their time at RIT.

This year’s university graduates are entering the job market at an uncertain time, due to economic fallout from the pandemic. And while RIT will not have a full picture of outcomes for this year’s graduates for a while, many companies are reporting that they plan to honor co-op and employment offers they have made to RIT students, said Maria Richart, director of Career Services and Cooperative Education.

“We may see the start date moved, a change to remote work or some other adjustments,” Richart said. “But these companies are telling us that they view our graduates as important talent additions to their staffs, and they plan to bring them on.”

Their paths after graduation are varied. Some are pursuing higher degrees in graduate school. Some are earning their degree to better their career. Some will join the military. And some have snagged their dream jobs.

RIT President David Munson says the graduating students, which includes students at RIT campuses in Croatia, Kosovo, Dubai and China, have met this challenge of resiliency.

The ceremony begins at 5 p.m. eastern time and will include remarks from Munson; Ellen Granberg, provost and senior vice president for Academic Affairs; and Student Government President Anika Aftab. Congratulatory messages from faculty and staff and live tweets will also be posted.

The ceremony will conclude with the conferring of degrees and a toast to the Class of 2020.

Co-ops lead to a career

Speck, a cross-registered student from RIT’s National Technical Institute for the Deaf, will receive his bachelor’s degree in mechanical engineering. He’ll be watching the ceremony at home in York, Pa., with his family.

“Looking back, I’ve been in college for a long time,” he said. “I’ll miss my friends, but I’m excited to be done so that I can get on with my journey. It will be nice to move on to a professional level.”

Speck, who will finish his classes online this summer, has a job waiting for him at GE Aviation in Cincinnati, where he completed four co-ops while at RIT. He’ll be working full-time and taking classes in a master’s program they offer in their Edison Engineering Development Program.

During his co-ops, he did testing and engineering, worked on computers, did analysis and spot checks, designed a better airfoil vane insert and developed new tests for fixture designs. His passion for engineering developed from his love of science and math, and his work with robots in high school.

And he says RIT, which connected him with his co-ops, prepared him well for his future employer.

Going to the front line

Balaji, of Pittsford, N.Y., is graduating with a bachelor and master’s degree as a physician assistant. It was a major she didn’t contemplate when she first attended RIT five years ago to pursue biomedical science.

Anita Balaji, receiving her BS/MS as a physician assistant, accepted a position at Strong Memorial Hospital and will work in internal medicine.

“My father is a physician, and I thought becoming a doctor or a nurse were the only two paths in a medical career,” she said. “I wanted to help people and diagnose patients, but I wanted more time for my family. When I learned about the physician assistant program, it was absolutely perfect for me, everything I was looking for. It was very appealing to me.”

Balaji, who also volunteered as an EMT for Pittsford Ambulance for eight years, completed nine of her 10 clinical rotations in different fields of medicine, including in hospital and outpatient office settings and in urban and rural areas. She accepted a job at Strong Memorial Hospital in internal medicine and will work as a physician assistant when she finishes her last rotation, passes the board exam and gets her license from the state.

COVID-19 didn’t exist when she started her education in health care, but said it wouldn’t have dissuaded her.

“It is a little nerve-wracking to work in a place where I could get sick, or make my friends and family get sick,” Balaji said. “But it’s exciting too, because this is what we’re training to do, to help people. It’s the perfect time to practice what we’re trained to do.”

Like many of her peers, she’s saddened that the planned commencement has to be held virtually this year due to the pandemic. “It’s definitely a bummer, but I know the university is trying to make it as positive as it can be and accommodate us,” she said. “I’ve been wanting to celebrate the high points with my friends I’ve made along the way.”

She hopes an in-person commencement can still be held later in the year, as well as her coating ceremony, where graduates were given their white coats by a faculty member or relative.

“My father was going to coat me,” Balaji said. “We were both looking forward to that.”

Hartman, of Pittsford, N.Y., is graduating from RIT 23 years after he graduated from high school. The husband and father of three is receiving a bachelor’s and master’s degree in computer science. 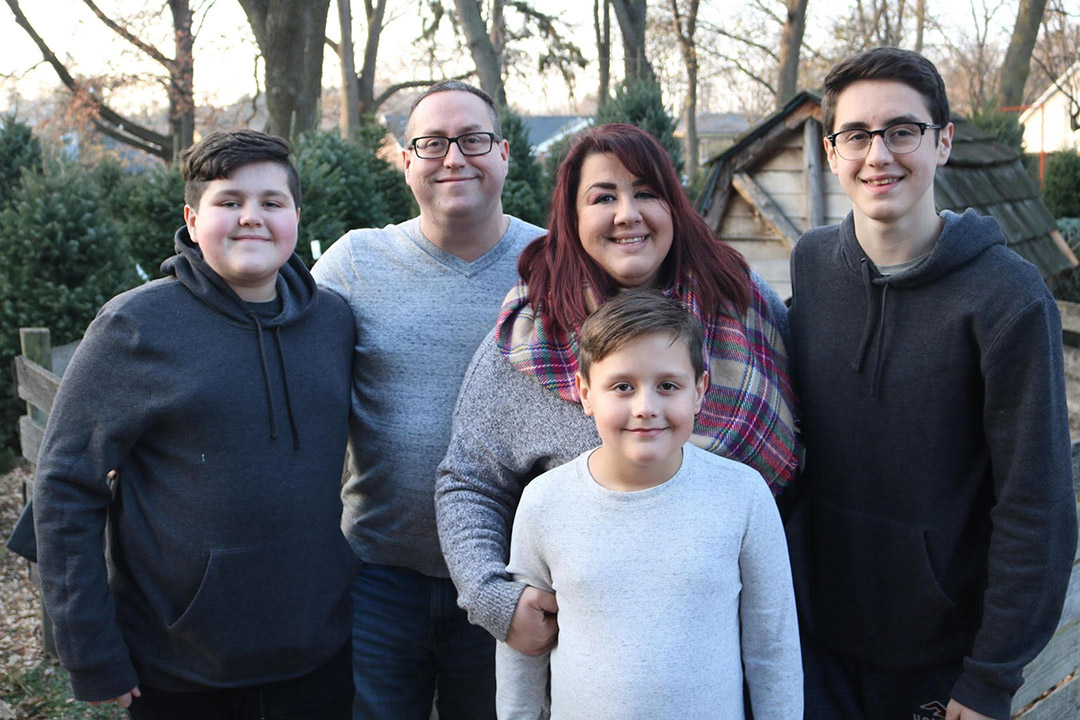 Eric Hartman graduates from RIT today with a BS/MS in computer science, 23 years after he graduated from high school. He is pictured with his son Nathaniel (left), wife Virginia, and sons Christian and Sebastian.

Hartman began his college experience at Yale, but dropped out after his father passed away.

“That was a super emotional time for our family,” he said.

He began working in the software industry—he’s a software engineering manager at Lenel S2 in Pittsford—and didn’t really think about finishing his degree until he was called into his boss’s office several years ago.

“I was told I needed to complete my degree because not having it prevented me from growing in the company,” Hartman said. “It was very rare for someone to go as high as I was without completing a bachelor’s degree. The company would pay my tuition, so I had no reason not to go back to school.”

At RIT, he took classes “at a slow pace,” averaging two classes per semester, including during summers. “It was nerve-wracking because I was so much older than the other students,” he said. “Sometimes I would ask a question and it would show how old I was. When we were going to do tests, I asked if we needed No. 2 pencils, and the professor was like, ‘no, we don’t do that.’”

Hartman is proud he’s an RIT Tiger, and cherishes the time he spent completing his degree.

“I remember telling my wife, RIT felt more like home than Yale because the students are eclectic, nerdy and a little bit eccentric,” he said.

He’ll be watching today’s commencement at home with his wife, Virginia, and their children, Sebastian, 14; Nathaniel, 12; and Christian, 10.

And although his mother recently passed away, Hartman knows she is with him in spirit.

“She was one of my biggest supporters to get me to go back to school,” he said. “She didn’t make it to the end, but I know she’s looking down at me from above. I know she’s proud of me.”

Her future is history

Carr, of Northport, N.Y., finished her classes last semester and hoped to walk in today’s graduation to receive her bachelor’s degrees in museum studies as well as digital humanities and social sciences, both from RIT’s College of Liberal Arts. Instead, she’ll be watching commencement online with her boyfriend in Madison, Wis. 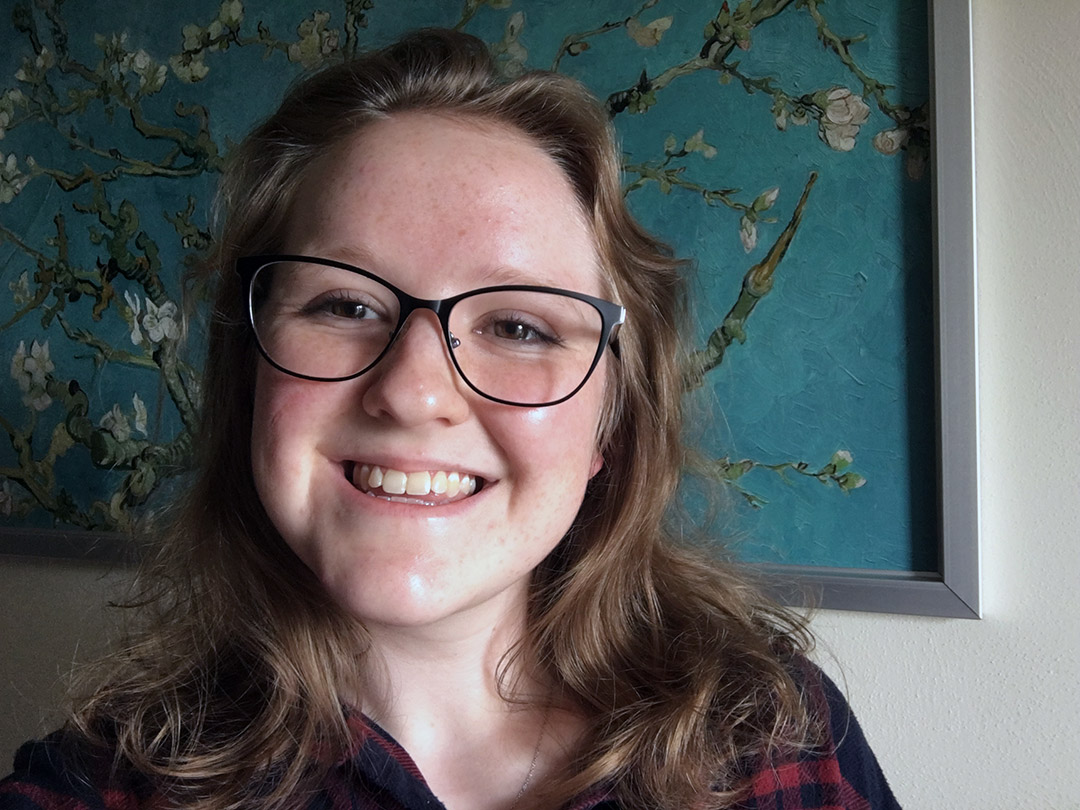 Lizzy Carr is receiving degrees in museum studies as well as digital humanities and social sciences. She’s headed to graduate school at the University of Rochester with hopes to become a curator.

“My grandparents were going to come and I was looking forward to have them see me walk across the stage—they had never seen the campus before,” she said. “Hopefully the whole family can come if we do something in the fall.”

She’s heading to graduate school. “I committed to the history Ph.D. program at the University of Rochester, which will let me get my master’s degree as well as the end goal of a Ph.D.,” she said.

Carr hopes to combine her museum studies background with a more focused graduate degree to work as a museum curator.

“I was really interested in becoming a curator from the get-go. The program at UR focuses on digital technology for public history uses, which I already have a background in due to my second degree in digital humanities and social sciences,” she said. “I’m hoping that I can use the knowledge from my RIT degrees as well as my graduate ones to help bring digital technology into museum spaces where they are not commonly found.”

Carr has had internships involving museums and archives on Long Island and the Museum of the City of New York, where she was a digital projects intern, creating digital content given to the public in an app.

“My museum and digital humanities track really gave me a leg up from everyone else who applied,” she said. “It was a nice way to merge the skills I had learned in my two majors, and gave me more practical skills I could put on a resume, like computer programming.”

Carr said as soon as she got to RIT, “it felt like home. It felt comfortable. I really enjoyed my time at RIT. I feel I grew a lot as a person and am really grateful for the opportunities I had. I feel like I have done what I needed to do. Now it’s time to move on to the next page of my life. I have some anxiety, but now that I know what my next steps are, I’m looking forward to them.”

Mahaney is graduating with a degree in mechanical engineering. A member of Navy ROTC, his next step is to be commissioned as an ensign on May 16, and learn nuclear engineering for a year—possibly online—before working on a nuclear submarine. 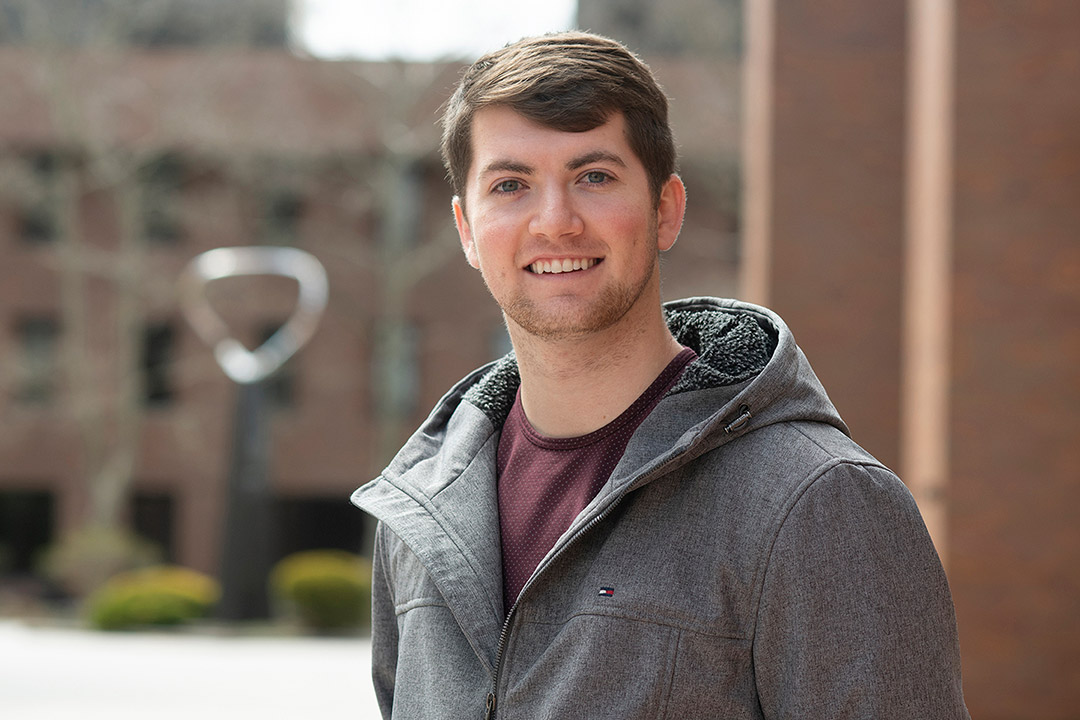 Sean Mahaney who is receiving a degree in mechanical engineering, will enter the Navy and work on a nuclear submarine.

He’ll be watching the commencement ceremony at his home in Annandale, N.J., with his parents, who both joined the Navy; his mother in the Navy Nurse Corps, and his father in the Civil Engineer Corps. “I was finishing up high school and saw the ROTC scholarship as a good way to pay for school, and as a way to pay back my country,” he said.

He’ll be in the Navy for at least five years, then have the option of making it a career or joining the civilian workforce. “I plan to keep as many doors open as possible,” he said.

Mahaney is excited about his future, and likes that his bachelor’s degree took five years to complete, which included his co-op experiences.

“With five years, you have more time to mature before you graduate. Having the opportunity to spend that extra time gaining real world experience on co-op was fantastic. I’m ready to graduate and feel it’s time. I’m definitely excited for the next step.”