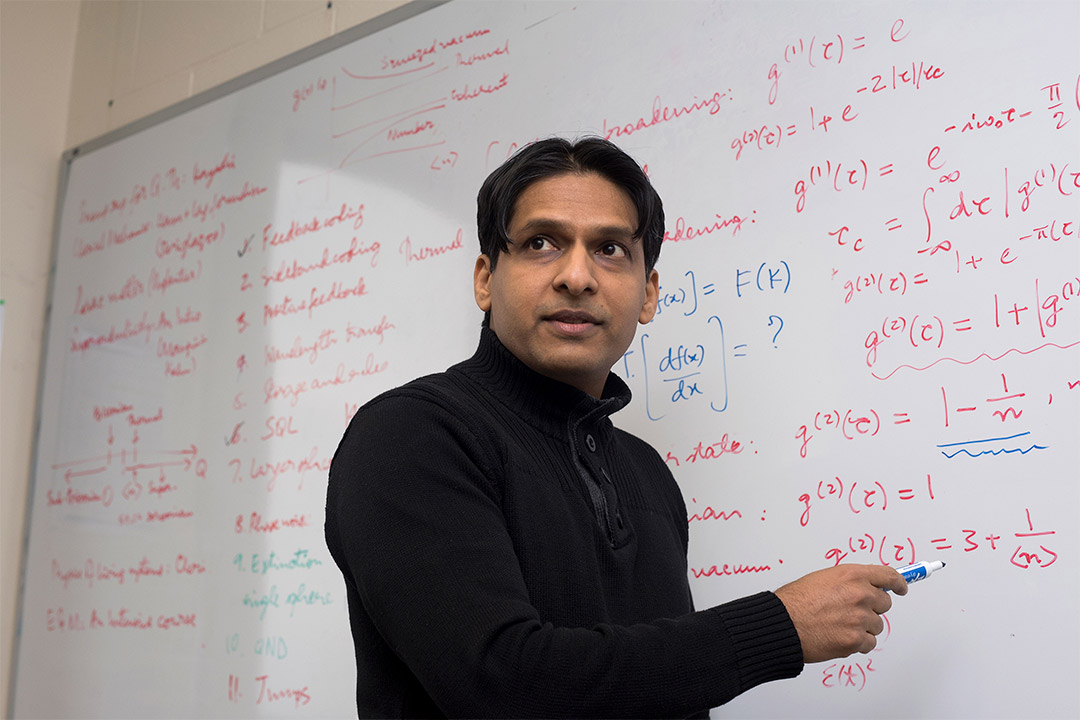 A team of scientists led by Associate Professor Mishkat Bhattacharya proposed a new method for detecting superfluid motion in an article published in Physical Review Letters.

Researchers at Rochester Institute of Technology are part of a new study that could help unlock the potential of superfluids—essentially frictionless special substances capable of unstopped motion once initiated. A team of scientists led by Mishkat Bhattacharya, an associate professor at RIT’s School of Physics and Astronomy and Future Photon Initiative, proposed a new method for detecting superfluid motion in an article published in Physical Review Letters.

Scientists have previously created superfluids in liquids, solids, and gases, and hope harnessing superfluids’ properties could help lead to discoveries such as a superconductor that works at room temperature. Bhattacharya said such a discovery could revolutionize the electronics industry, where loss of energy due to resistive heating of wires incurs major costs.

However, one of the main problems with studying superfluids is that all available methods of measuring the delicate superfluid rotation bring the motion to a halt. Bhattacharya and his team of RIT postdoctoral researchers teamed up with scientists in Japan, Taiwan, and India to propose a new detection method that is minimally destructive, in situ, and in real-time.

Bhattacharya said the techniques used to detect gravitational waves predicted by Einstein inspired the new method. The basic idea is to pass laser light through the rotating superfluid. The light that emerged would then pick up a modulation at the frequency of superfluid rotation. Detecting this frequency in the light beam using existing technology yielded knowledge of the superfluid motion. The challenge was to ensure the laser beam did not disturb the superflow, which the team accomplished by choosing a light wavelength different from any that would be absorbed by the atoms.

“Our proposed method is the first to ensure minimally destructive measurement and is a thousand times more sensitive than any available technique,” said Bhattacharya. “This is a very exciting development, as the combination of optics with atomic superflow promises entirely new possibilities for sensing and information processing.”

Bhattacharya’s theoretical team on the paper consisted of RIT postdoctoral researchers Pardeep Kumar and Tushar Biswas, and alumnus Kristian Feliz ’21 (physics). The international collaborators consisted of professors Rina Kanamoto from Meiji University, Ming-Shien Chang from the Academia Sinica, and Anand Jha from the Indian Institute of Technology. Bhattacharya’s work was supported by a CAREER Award from the National Science Foundation.

To read the full study, go to the Physical Review Letters website.