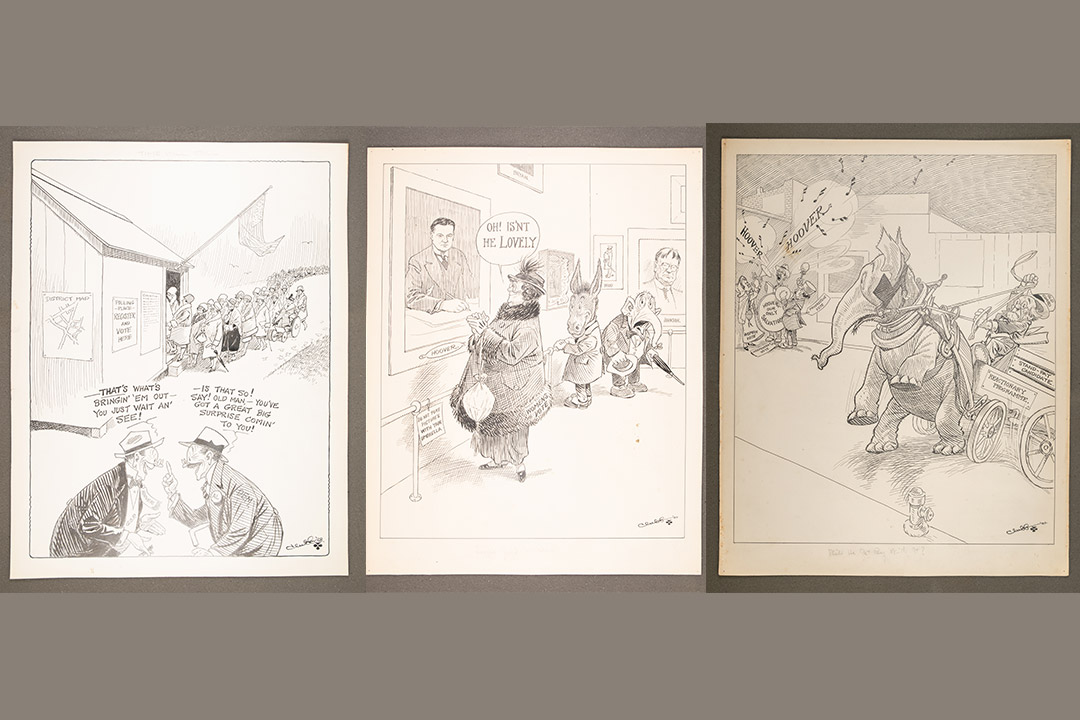 Editorial cartoons from the RIT Archives Collections are the focus of an online exhibit, “Epidemics, Economics, and Elections,” featuring the work of John Scott Clubb and Elmer Messner. Shown here, a sample of Clubb’s election-themed cartoons.

Political cartoons from Rochester, N.Y., newspapers from the early 20th century are the focus of a virtual exhibit hosted by Rochester Institute of Technology Libraries’ Archives Collections and explores three timely topics—voting rights to epidemics and economic uncertainty.

The exhibit, “Epidemics, Economics and Elections: The Editorial Cartoons of John Scott Clubb and Elmer Messner,” features the work of two prominent Rochester artists who were active during an era that favored newspapers. Clubb and Messner produced volumes of editorial cartoons about everyday life, many of which are held in the RIT Archives and represent the exhibit’s three major themes.

The Elmer Messner Collection at the RIT Libraries is the largest repository of the artist’s political cartoons and holds more than 1,500 drawings, according to Elizabeth Call, RIT University Archivist. The collection is especially significant to RIT because Messner, a Rochester native whose work was known beyond Western, N.Y, was a 1918 alumnus of RIT, then the Rochester Athenaeum and Mechanics Institute, and was on the art school faculty from 1924 to 1945. RIT Archives’ entire repository of Clubb’s and Messner’s work will be available in the spring on RIT Libraries’ Digital Collections.

Events surrounding the exhibit will begin with a virtual opening from 6 to 7 p.m. Oct. 7, featuring a talk by Phil Hands, editorial cartoonist for the Wisconsin State Journal in Madison, Wis., and Leigh Rubin, syndicated cartoonist and creator of Rubes, and cartoonist-in-residence at RIT.  They will discuss the evolution of editorial cartooning using work by Clubb and Messner and their own examples to illustrate this history. (Register for the online event.)  Their opening talk sets the context for a series of events extending into the spring semester that are designed to connect the cartoons’ historical content to contemporary life.

The nearly 40 election-related cartoons in the exhibit focus on the suffrage movement and the 19th Amendment as it was happening, between 1918 and 1920. Call and her curatorial team picked these examples for an upcoming event that will take a closer look at the drawings.

Hinda Mandell, RIT associate professor in the School of Communication, will lead a textual analysis of editorial cartoons on women voters and the 19th Amendment, from noon to 1 p.m. Oct. 29, in an online Zoom webinar. (Register for the event.) Students taking her special topics course, Media and the 2020 Presidential Election, are analyzing Clubb’s suffrage-related cartoons not included in the exhibit.

Editorial cartoons relating to the 1918 influenza epidemic and economic worries are two themes in the digital exhibit that will be highlighted in separate events during the spring semester. Call is working with RIT adjunct professor Kriota Willberg to incorporate material from the exhibit into her class on Graphic Medicine. This example, along with Mandel’s class project, shows how the unique content in the RIT Archive can connect the past to the present and enrich students’ education.

“The exhibit is supporting teaching,” Call said. “We currently have two classes that will be using the cartoons as a springboard for an assignment.  We want to create a page on the exhibit that will showcase the student work.”

“Epidemics, Economics and Elections: The Editorial Cartoons of John Scott Clubb and Elmer Messner,” grew from a collaboration of RIT Libraries staff, faculty, and Rochester resident Mellissa Corcoran Hopkins. Hopkins donated a selection of Clubb’s editorial cartoons to the RIT Archives and partnered with the curatorial team, contributing contextual essays about historical Rochester.