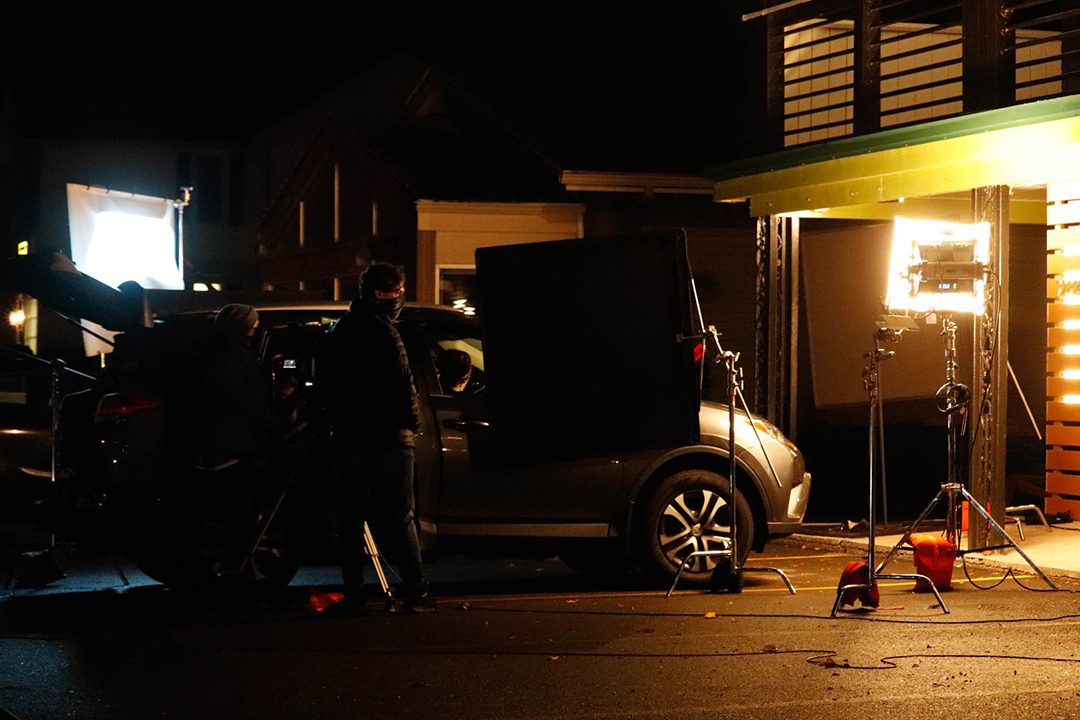 For RIT student filmmakers who are storytelling in the midst of a pandemic, grey has become the new black. While it’s impossible for any production to eliminate all risk in front of and behind the camera, they’ve had to constantly consider the additional time and safety procedures necessary to achieve the perfect shot.

It’s a slog to keep the camera rolling and people protected in a highly tactile and collaborative creative environment. Safety measures inevitably have resulted in additional shooting days—or nights—while directors and actors are increasingly isolated.

A major takeaway, however, for both faculty and students in RIT’s School of Film and Animation (SoFA), is a fierce commitment to filmmaking in the most unpredictable of circumstances.

“The pandemic has been challenging for everyone and there are innumerable ways that each of our schools in the College of Art and Design (CAD) has been dealing with it,” said Tom Gasek, one of four interim SoFA co-directors. “In SoFA, having access to peers and mentors is critical and ideal if these encounters are in person, but social distancing has made it difficult.”

For Kristie Grosvenor, a fourth-year film production major from Scranton, Pa. (who uses they/them pronouns), shooting the majority of scenes for a senior capstone film last fall was particularly challenging given the story takes place at night.

“We had to tough it out through several overnight shoots last October … I am infinitely grateful for such an inspiring crew,” Grosvenor said. The film, titled Self Conclusions, tells a dramatic coming-of-age story about a troubled teenaged girl desperately trying to discover an outlet.

“We utilized a local Rochester bar that had been closed and had to be sanitized to meet New York state guidelines, a hotel balcony and parking lot, and even outside my own house,” they added.

“Constant masks and social distancing perpetuated by a skeleton crew,” Grosvenor recalled. “Working outside allowed us to keep enough space between everyone. We had additional meetings beforehand to make sure everyone understood the conditions of the new-and-improved set culture requiring safety.” 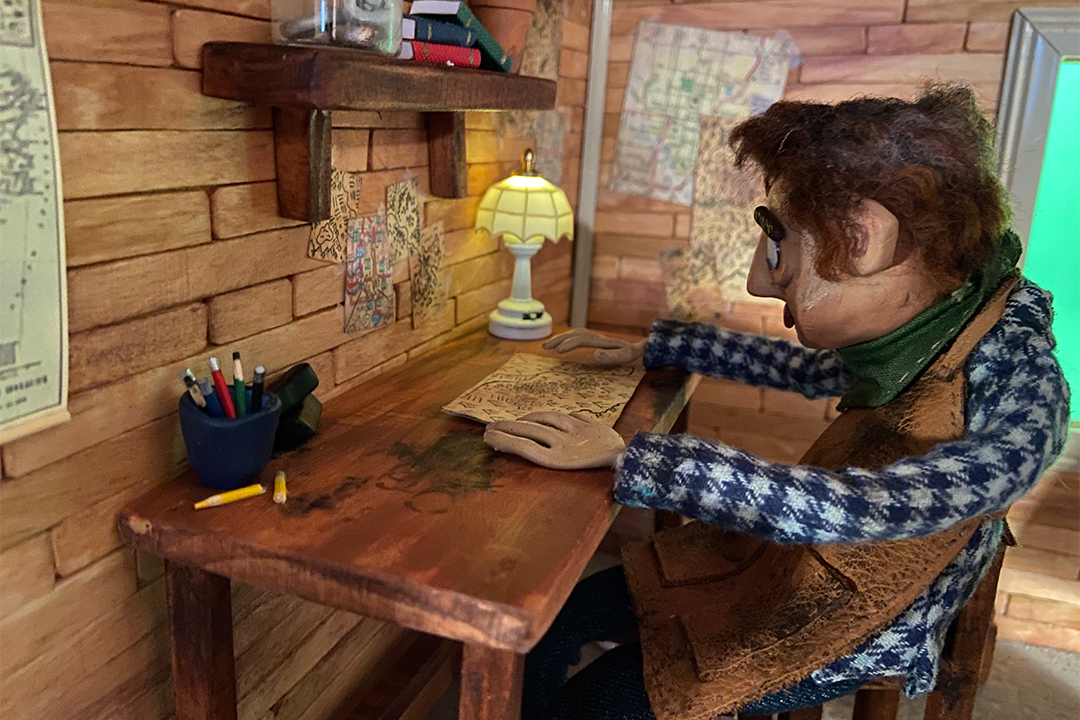 A photo from the set for The Mapmaker, a stop-motion animation film directed by fourth-year SoFA student Laiken Hall.

While live-action filmmaking during a pandemic is wrought with trials and tribulations, other film methods create their own unique challenges. Laiken Hall, a film and animation student from Clinton, N.Y., specializes in stop-motion animation and is working with a composer from the Eastman School of Music on her primarily solo film project.

“The pandemic has led to a number of changes in my production timeline,” Hall said of her capstone film titled The Mapmaker, which tells the story of a middle-aged mapmaker who tries to save enough money to be able to leave his cramped workshop to view the mountains outside his window.

Hall is using one of the new stop-motion spaces inside MAGIC Spell Studios, along with the “prop shop,” a relatively small machine workspace for SoFA students where Hall also works.

“Pandemic protocols have been the hardest to work around,” she said. “I have tried to get most of my fabrication done at home, or during my prop-shop shifts, so that I was not taking up shop time for other students.”

This year marks her third as a shop supervisor and the most health and safety focused by far.

“Since the start of the pandemic, we require all students to wear a mask, require that they sanitize machinery and workspaces after use, and only allow up to three students in the shop to maintain social distancing,” she said. 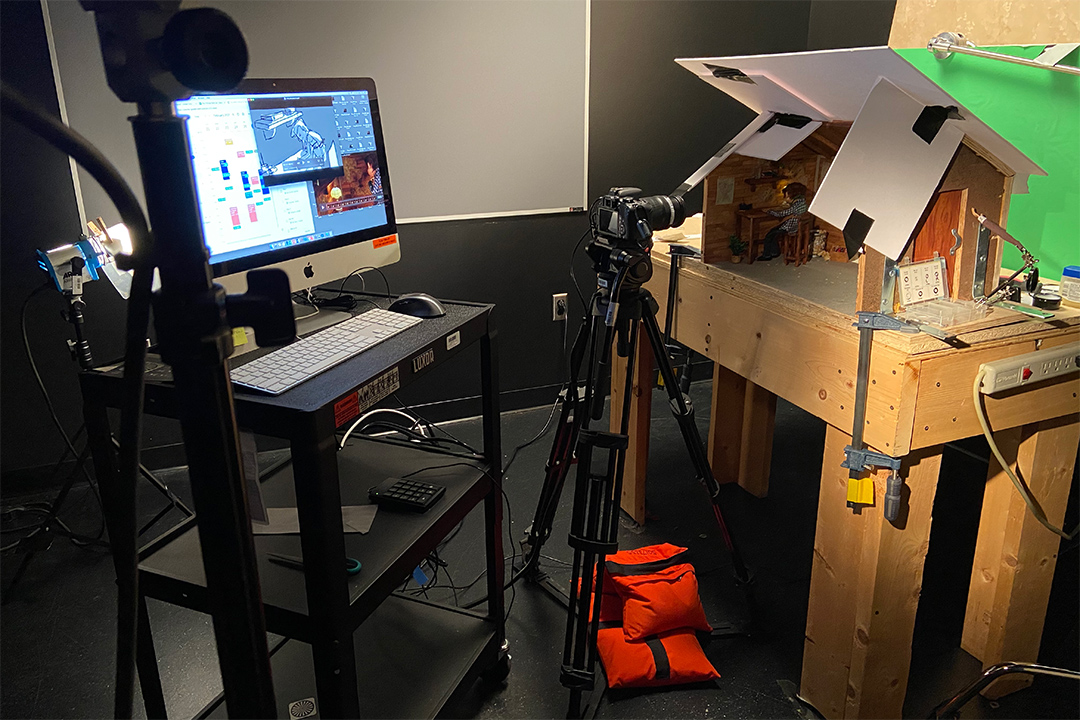 “I feel terrible turning away students when the room is full, but everyone has been understanding,” she observed.

“I really must commend our students for wearing masks and shields, with not a single complaint or lack of compliance,” Beck said. “RIT has adjusted to this situation as well as any school—better than most from what I have seen.”

“(CAD) Dean Todd Jokl has been excellent keeping the communication strong from the start … transparent and honest,” he added.

Both Beck and Gasek saluted the film school’s facilities staff and support systems personnel for their tireless efforts to provide properly sanitized equipment and space set-ups to accommodate each faculty member and his or her class needs.

Filmmaking through the pandemic has mirrored the story in Grosvenor’s capstone project.

“Life is unfortunately much harder than we anticipate sometimes, and things don’t always work out the way we expect,” they said. “That doesn’t mean we just stop, however, or give up. It means we reevaluate, adapt, and understand, coming to our own conclusions.”