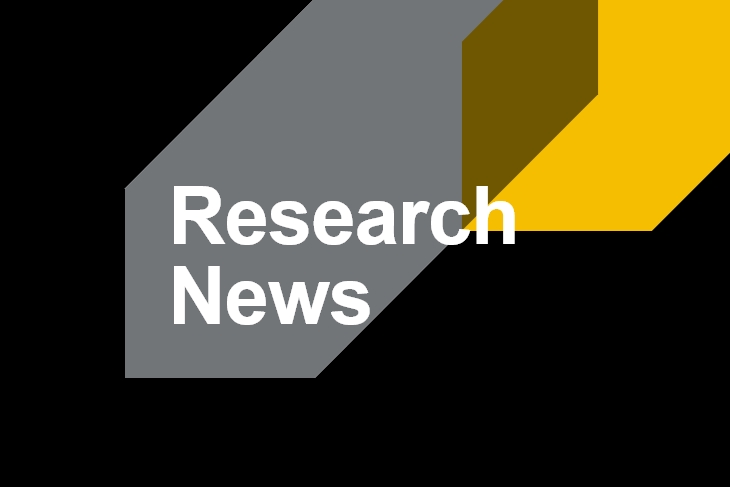 It takes a village to create fusion.

Students in RIT’s College of Engineering Technology (CET) worked alongside faculty-researcher Brian Rice this semester on designing hardware in support of cryogenic inertial confinement fusion experiments. The work, part of a larger initiative based in the University of Rochester’s (UR) Laboratory of Laser Energetics (LLE), is helping to contribute to novel thermonuclear fusion technology solutions, specifically in the area of vibration control of the spherical capsules containing solidified heavy hydrogen, the fuel source. 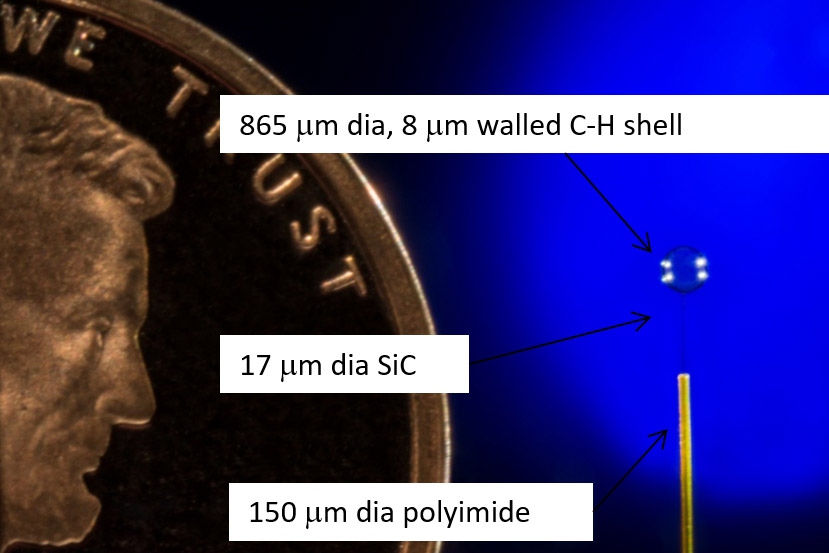 This image is of an 860 micro-meter diameter plastic shell supported by a 17-micro meter silicon carbide fiber. The shell is filled with a mixture of heavy hydrogen that undergoes fusion reactions.

“The ultimate goal is to have a fusion reaction that produces more energy out than is put in.  Experiments at LLE have proven that it is physically possible. Unlike a fission reaction, a fusion reaction produces no nuclear waste,” said Rice, an assistant professor in CET’s Department of Manufacturing and Mechanical Engineering Technology. He has received research funding for specific projects as part of UR’s grant with the Department of Energy. Some aspects of the developmental process are taking place at RIT with Rice leading a team of undergraduate and graduate students in the process.

“Most of our research projects have been related to two areas, fuel capsule vibration isolation systems and fuel capsule support structures,” said Rice, who is part of the growing research initiatives at CET that utilize the expertise of its faculty-researchers and ongoing collaborations with peer universities such as the University of Rochester.

The relationship allows for students to learn more about the field of fusion reactor technology and to have hands-on design opportunities to learn about the important development process. This work is part of the evolving area of laser fusion—which shines laser light directly on a spherical fuel capsule containing heavy hydrogen. The resulting energy transfer from the laser produces intense temperatures and pressures creating a thermonuclear fusion reaction, comparable to how energy is emitted by the sun. Long-term research goals are to create a fusion reactor capable of producing electric power and the discovery of new materials and processes that could lead to more efficient fusion reactions.

“From that standpoint, a lot of the work is fairly unique to the LLE’s program. Though much of our vibration isolation work is applicable to many industries. For example, minimizing vibrations is important in the manufacture of integrated circuits, and high quality optical instruments,” said Rice.

Over the course of three years, students in Rice’s lab have completed five capstone projects, and five undergraduate research projects related to different aspects of the LLE research. Several breakthroughs in the area of Eddy current damping—the phenomena of movement of a conductor in a magenetic field which causes heat build up and energy loss.

“While working in Dr. Rice’s lab, I completed research on controlling impacts in sports helmets and Eddy current damping. My work was very hands-on,” said Luc Booz, a fifth-year mechanical engineering technology major from Northbridge, Mass., who graduated this May. “ I met and communicated with a researcher at LLE to go over project goals and progress a couple of times. It was very exciting to see the facility and understand the machines and equipment my research was contributing to. Prior to my research, I had no knowledge of this engineering field so learning more about it and viewing the facilities were exciting experiences.”

Pete van Camp agreed. The third-year student from Marion, N.Y., designed a test model that incorporated Eddy current dampening into a three-point ball-bearing isolator. The purpose of this was to test the effectiveness of the Eddy currents in dampening the low, natural frequencies left over from the isolator.

“One of the greatest challenges is that there is not much previous research done on eddy currents used in this way,” van Camp said. He looks to continue work in the lab this summer and fall.

“The RIT students, under the leadership of Brian Rice, have proven to be a valuable asset to the LLE Cryogenic program,” said Milt Shoup, head of the mechanical engineering department at LLE, and UR’s principal investigator on this research collaboration. “The students provide LLE the resource pool necessary to pursue cutting edge technologies and techniques for the Cryogenic program. Their work over the last three years is proving to be beneficial to the LLE program.”

Shoup has received research funding for specific projects as part of UR’s grant with the Department of Energy. This work is supported by the DOE’s National Nuclear Security Administration.

Rice came to RIT in 2016, after several years as part of the LLE team at UR. He was part of the UR in-house team that designed the next-generation moving cryostat that is currently used for all cryogenic fusion experiments at LLE. He retained his relationship with the group, collaborating on a series of projects in his area of expertise related to vibration control, solid mechanics, and heat transfer.

For Rice, the continued relationship with the University of Rochester has multiple benefits—for the Laser Lab and the students at both universities.

“I usually meet students in the classes that I teach and from talking to them, I get an idea of their interests and what they are good at,” he said, adding that even during the pandemic, the research work was modified slightly with a mix of online connections and in-person labs have continued. “It is learn-by-doing. I let them know what we need to accomplish and how to run experiments to measure vibrations and I guide them overall in how to do this.”

The multi-year collaboration has resulted in journal articles and conference participation. CET also has a partnership with Vellore Institute of Technology, India, and Rice has included students from this college on several projects.