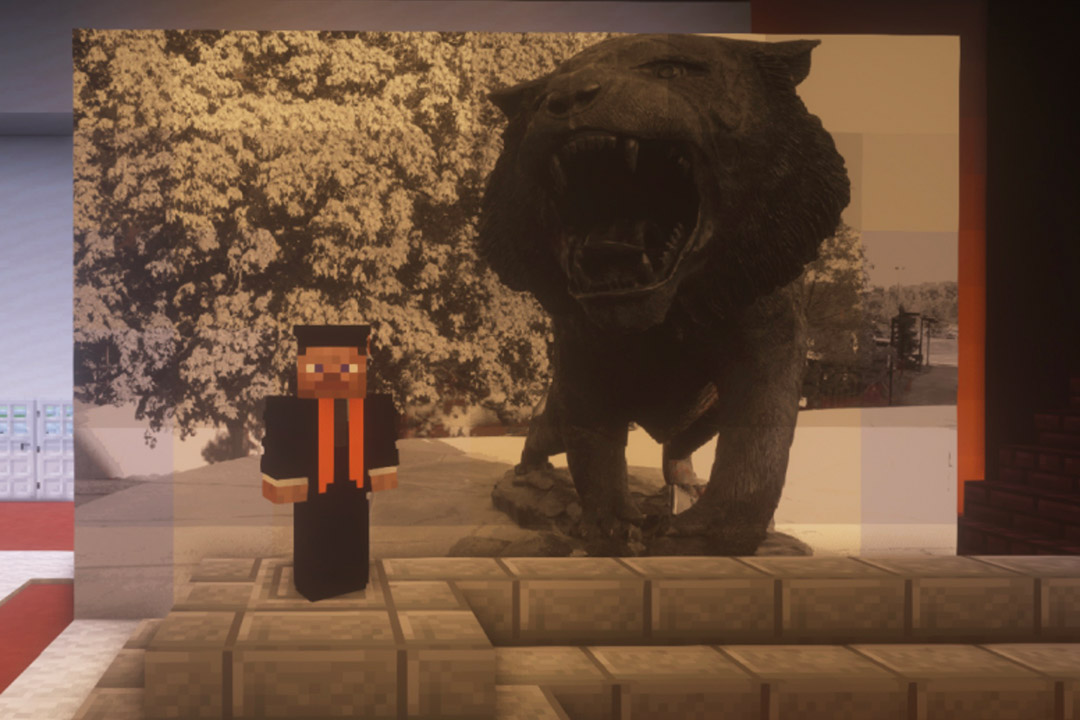 Graduates can take a screenshot of their character, in cap and gown, next to the RIT Tiger Statue.

RIT’s Class of 2020 is getting a bonus opportunity after last week’s virtual conferral of degrees — a ceremony in the video game Minecraft that will allow them to virtually walk across the graduation stage.

In response to the COVID-19 pandemic, RIT’s student-run Electronic Gaming Society (EGS) is holding a virtual Minecraft commencement ceremony at 8 p.m. May 15. Minecraft users can participate in the ceremony in-game, while any viewers who don’t have the game can livestream the event on Twitch, YouTube and Mixer. 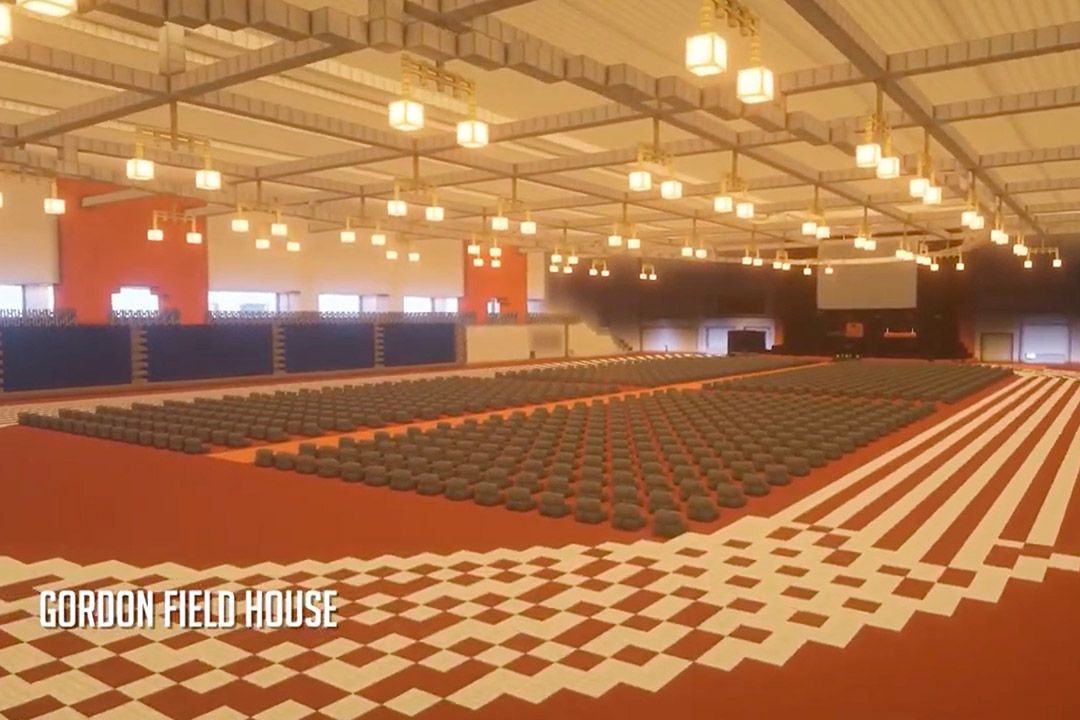 “We had the idea of hosting a virtual commencement to honor the Class of 2020 from the very beginning of our project to rebuild RIT in Minecraft,” said Alexa Amoriello, incoming EGS president who is also head moderator for the Minecraft project. “We made sure that the Gordon Field House and Activities Center was one of the first buildings to be recreated so that we would be prepared for this event.”

The student creators have added a stage, podium, chairs, “Minecraft Munson” and other commencement decorations to the virtual Field House. They also created a graduation gown skin for users to apply to their characters during the event.

Graduating students who are interested in “walking” during the ceremony must fill out the sign-up form in advance to get more details.

The virtual celebrations of the Class of 2020 are not intended to replace the atmosphere of a traditional commencement, which RIT plans to host on campus when it’s deemed safe.

Incoming EGS club president Amoriello, a second-year game design and development major, will open the commencement ceremony with a speech about the RIT Minecraft campus build. It will be followed by speeches from other participants to the Class of 2020.

One-by-one, graduating students will be announced by their Minecraft usernames and invited to walk across the stage. They’ll be greeted by the in-game version of RIT President David Munson, which will be controlled by a club member. 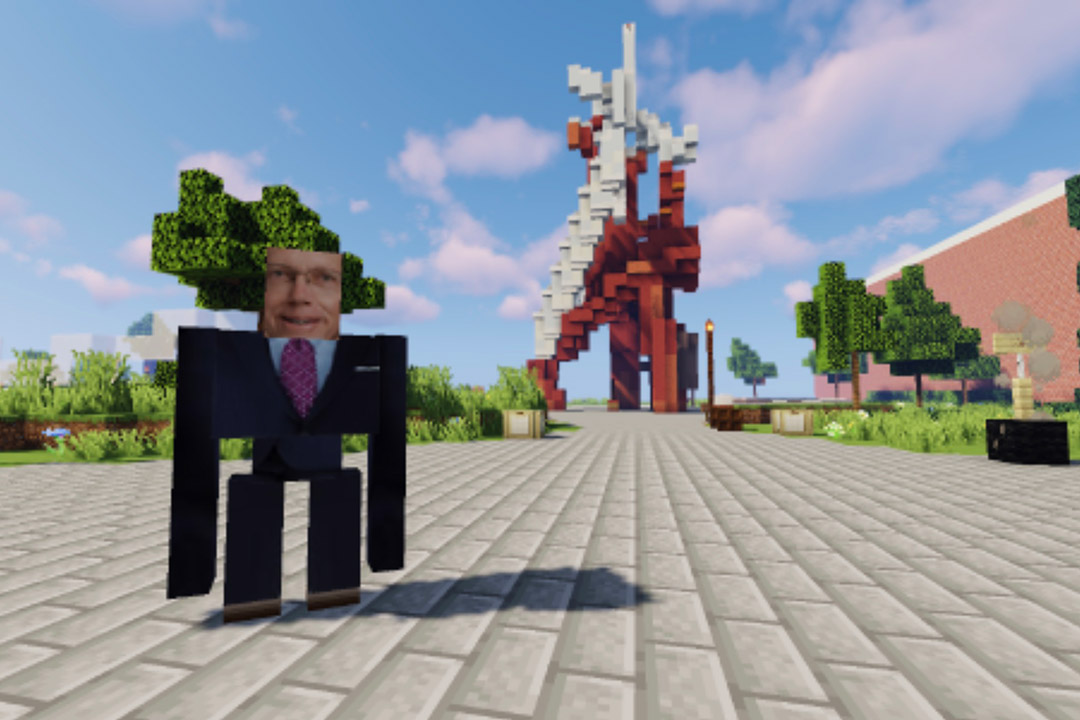 Using a resource pack, RIT creators were able to customize a Minecraft RIT President Munson that will appear at the commencement.

Minecraft Munson was created by club member Luca Jones, a third-year applied computer technology student, who used a photograph of Munson to change the appearance of Minecraft’s Iron Golem creature.

“The Golem was chosen because the creature is much taller than player characters — similar to how Munson is much taller than most people on campus,” said Amoriello. “Normally, the Minecraft Munson creature wanders the campus on his own, but we couldn’t imagine having the ceremony without him.”

As the graduating students walk across the stage, Munson will throw a diploma to the player.

“The diplomas are made from Minecraft’s map items, but are decorated to look like a RIT diploma,” said Amoriello, who is from Westchester, N.Y.

When each student catches their diploma, a congratulatory message will appear on everyone’s screen and orange fireworks will go-off above the stage. Participants will also have the option to thank people and give a few words of encouragement. 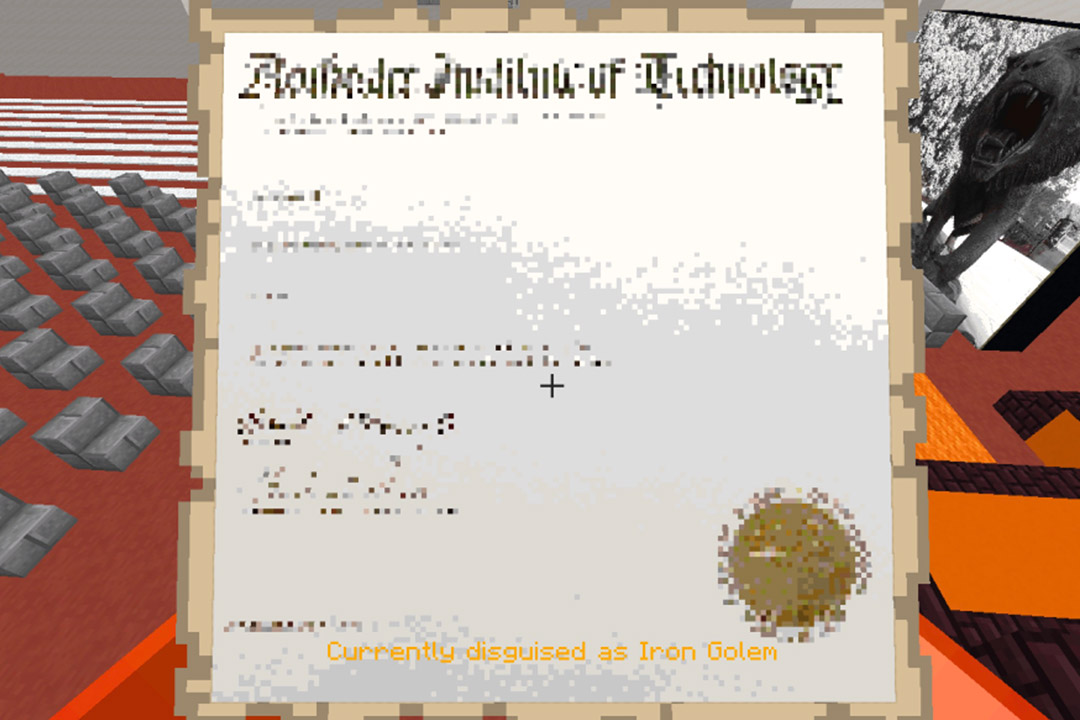 Participants in the virtual commencement will receive a Minecraft RIT diploma.

After graduates exit the stage, there will be a screenshot photobooth where they can take a photo of their Minecraft character, in cap and gown, next to RIT’s Tiger Statue.

To participate in the event, fill out the Minecraft Graduation sign-up sheet in advance.

The virtual Minecraft commencement is just one part of the larger student-led project to rebuild sections of the RIT campus in Minecraft.

The project picked up speed after RIT was affected by the COVID-19 pandemic in mid-March. The game Minecraft allows multiple players to collaborate on building structures and designing landscapes, including recreating physical places.

“We have been working hard to start the creation of new buildings, as well as update, improve and finish the areas we have already begun,” Amoriello. “Our biggest challenge was the implementation of the Gordon Field House, where builders have spent a lot of time not only constructing the Field House, but also preparing it for our virtual commencement ceremony.”

Visitors can view the campus in a YouTube video created by EGS.

EGS is scheduled to start a new building every Wednesday night. Most recently, the group has started building the Wallace Library, Frank Ritter Ice Arena and Liberal Arts Hall.

“We have also recently started thinking about the other events we will host after commencement, such as Humans vs. Zombies,” said Amoriello. “For this event, we will be partnering with the RIT HvZ team. We already have members of our club coding to create a custom plug-in that will expand the features in our server in order for a game of HvZ to take place.”

The club invites any member of the RIT community interested in participating in the project to join their Minecraft server using the IP mc.server-egsrit.com. You can also join the EGS Discord server and follow on social media to find additional information on getting involved, stay up-to-date on announcements regarding the project and talk to others working on the project. 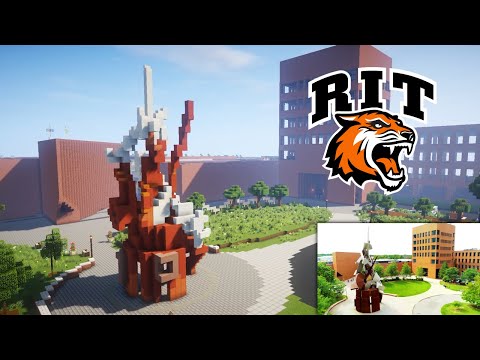