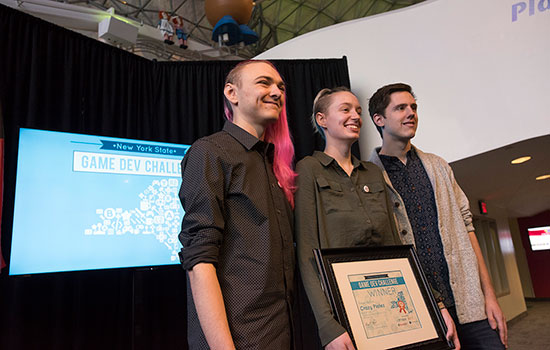 The RIT student team from Aesthetician Labs took home first place in the New York State Game Dev Challenge, hosted by RIT, for their game Crazy Platez. From left, Noah Ratcliff, Sam Cammarata and Aidan Markham accepted the $12,000 prize for winning the student developer category. The challenge was sponsored by Empire State Development and held at The Strong in downtown Rochester on April 12.

Other award winners were:

The challenge, which began Jan. 19 and ended March 1, gathered game ideas from students enrolled in New York state colleges and universities as well as independent developers residing within the state, with an eventual goal of bringing some of these games to production.

“We are incredibly lucky to have such rich industry talent and network of support throughout the state,” said Robert Mostyn, New York State Game Challenge administrator and Digital Games HUB Coordinator at RIT. “Together with our friends and partners we are working to put New York state on the national map of a great place to make games. And this challenge, and the developers that we are going to recognize today, are a very important part of this network—and we are excited to continue growing that today.”

Empire State Development President, CEO and Commissioner Howard Zemsky said, “The Game Dev Challenge highlights RIT's emerging role as a digital media hub. By encouraging students and independent developers to design and produce innovative digital games, competitions like these are creating new jobs and opportunities in the Finger Lakes region and across the state.”

“It was a pleasure to evaluate the submissions,” said Nathanielsz. “The range of new ideas among the student entries was impressive. This category demonstrated the talent and creativity of students in our New York state colleges and universities. I can’t wait to see how their games evolve and mature over the coming years as they continue to work and push our industry forward. I’m very excited because the future is bright for these students and our industry.”

RIT’s MAGIC Center is a nonprofit university-wide research and development laboratory and a commercial production studio that assists in efforts to bring digital media creations up to marketplace standards and commercialization. Faculty, staff and student researchers, artists and practitioners come together to create, contextualize and apply new knowledge in a multitude of related fields and disciplines as appropriate not only to STEM or the arts and humanities, but their intersection. RIT’s MAGIC Spell Studios, which will move into a new building in the fall, focuses on nurturing and growing new companies and publishing and distributing their projects. 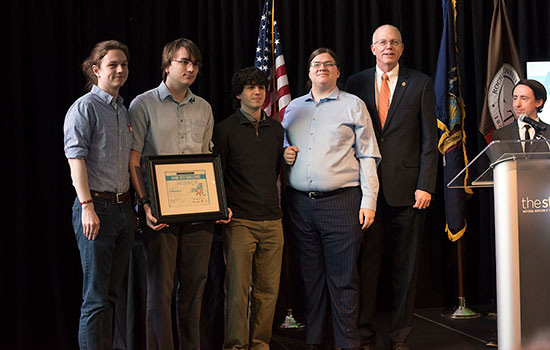 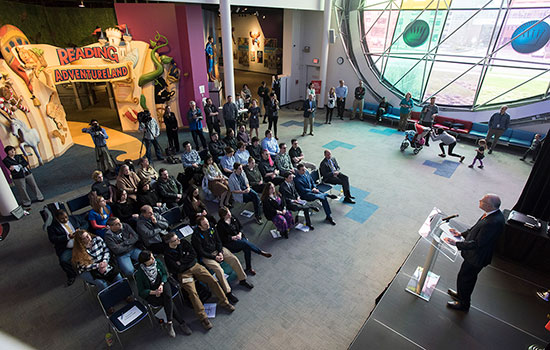 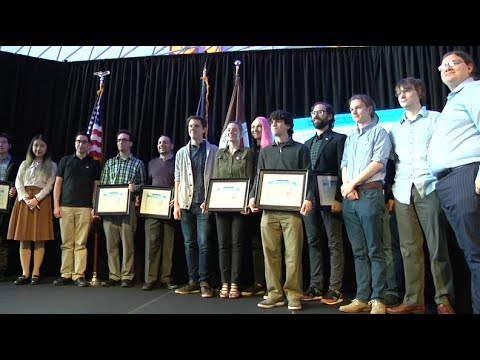