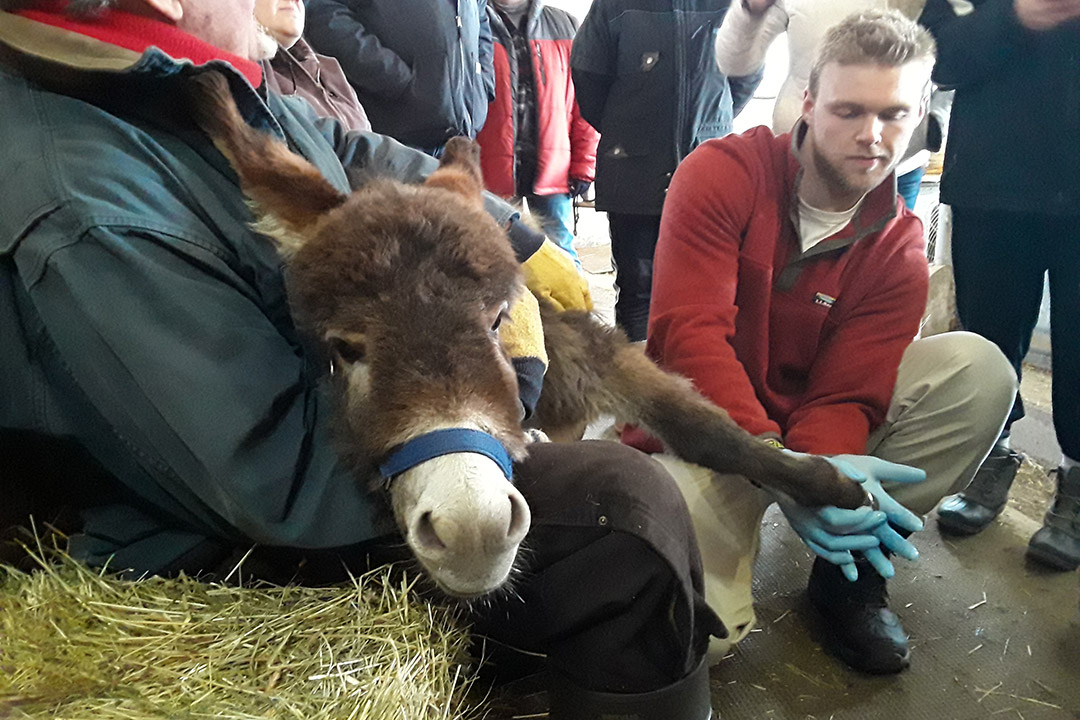 RIT biomedical engineering students, a general manager from local tech firm Harbec, members of a Penfield FIRST Robotics team and the Koonmen family were part of the unlikely team brought together to help Saler. Their solutions combined current technology with a lot of TLC from friends and family. 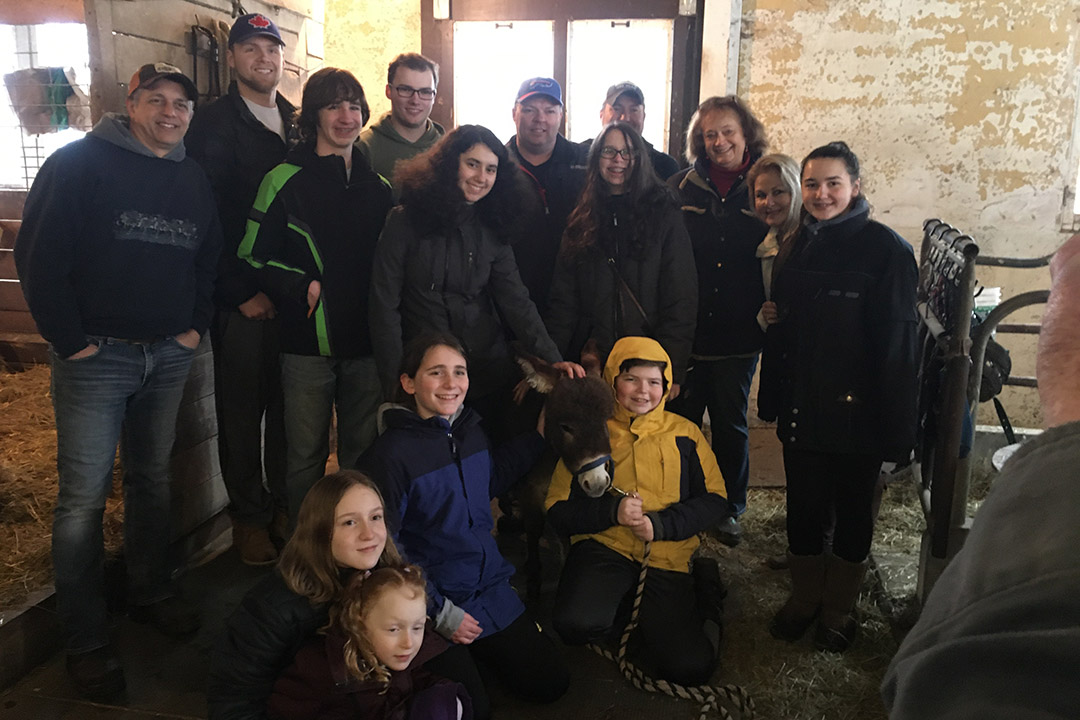 Many people were involved in helping Saler, from the Pinkney and Koonmen families to Harbec’s Matt Jewett and members of his FIRST Robotics team from Penfield.

So much has happened to the little donkey in his nine months of life: As Saler was growing, tendons in his front limbs did not develop at the same rate as those in the back. Over time, the front hooves curved downward restricting his movement. Several early options were wooden wedges that could be temporarily attached to the hooves; even cushioned baby sneakers were fitted. Complicating the issue – even miniature donkeys grow—and as the hooves healed, they would change.

“Surgery on this front legs with done to relieve some of the tendon tension, which succeeded in a limited way,” said Karen Pinkney. “The hope is that the corrective shoes will complete the process.”

Fast forward to this January. The Koonmen family—Lori Webster Koonmen ’87 (graphic design), her husband, Dan, and daughter Isabelle—would come by weekly to visit and help with some of the rehabilitation. 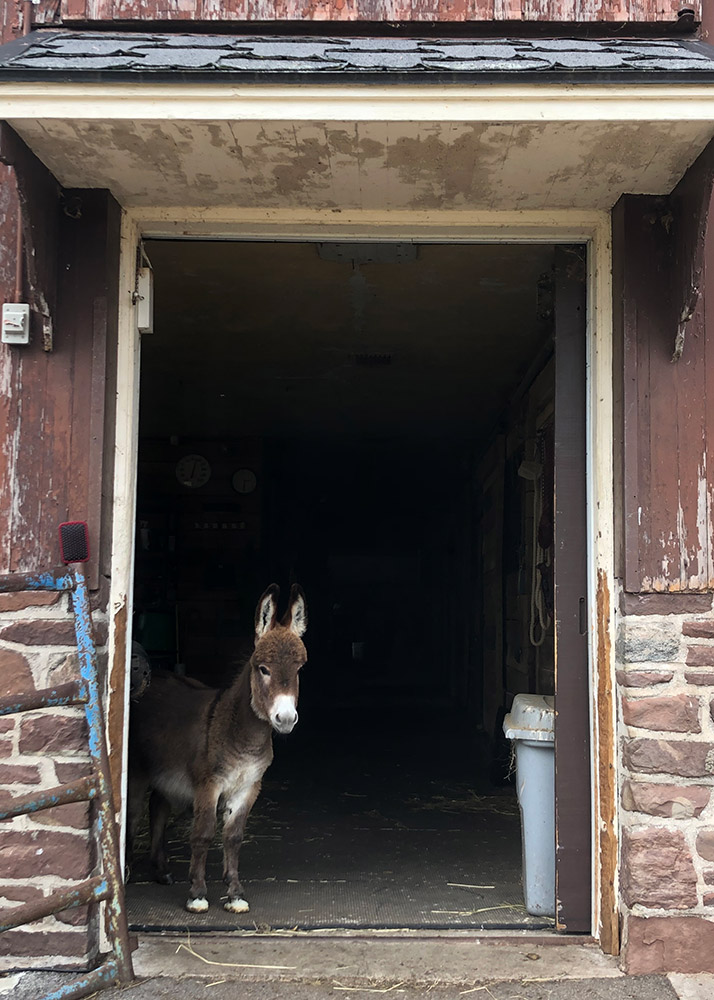 Saler, a 9-month-old Mediterranean Miniature Donke,y peeks out from his stall at Wychmere Farms where he lives. He was recently fitted for new 3D printed shoes to protect his hooves after corrective surgery.

“We had been driving one day down Lake Road in Ontario, N.Y., and saw the farm with several of the miniature donkeys in the pasture,” she said. The family would stop and start a friendship with the Pinkneys, who run the beautiful Wychmere Farm, a historical site that was once a dairy, fruit and horse farm. They learned that the Pinkneys raised quarter horses and paints for nearly 40 years and were the first in the Northeast to raise Angus X Simmental beef cattle. Today, they breed a collection of adorable Mediterranean Miniature Donkeys, including Saler.

Upon hearing of Saler’s challenges and what he’d need to heal, Webster Koonmen would set several things in motion, including a call to her brother who recommended a 3D scan to design and manufacture fitted shoes. The next morning, she would place a call to Harbec, a local manufacturer in Ontario. Matt Jewett ’98 (computer engineering), general manager at the company, responded. He’d suggest involving the FIRST Robotics Tech Challenge team from Penfield, where he is a mentor, and RIT biomedical engineering students to start the design process. 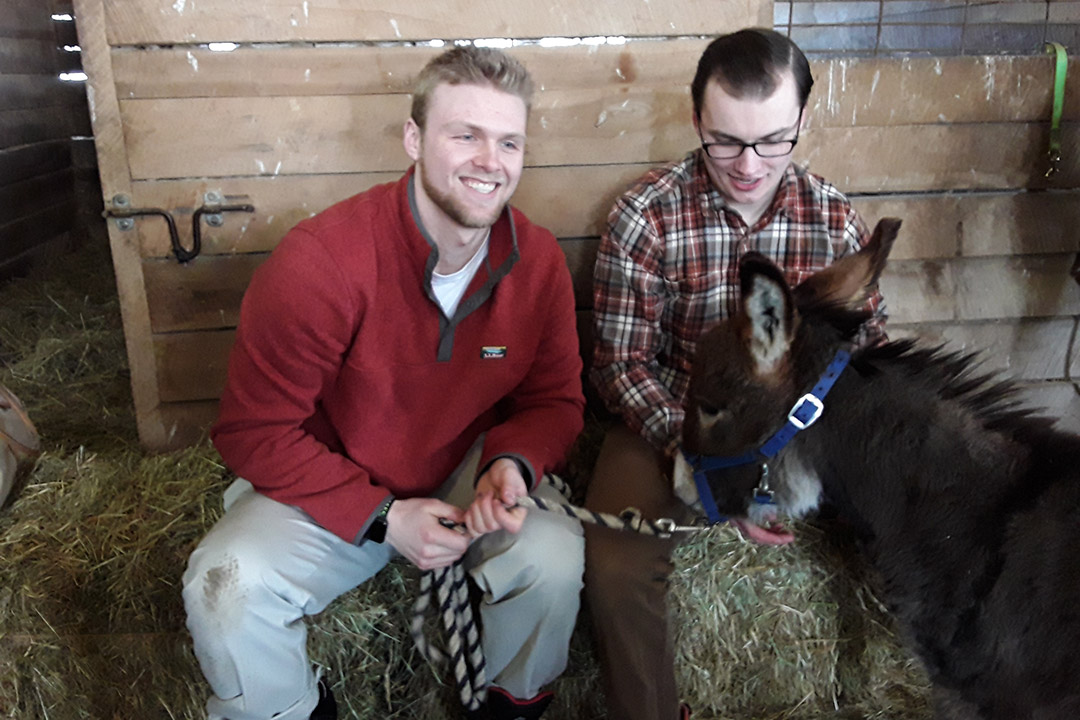 Sean Bellefeuille, left, and Will Byron, both RIT biomedical engineering students and co-founders of the student club BioPrint, produced the designs and help fit Saler with new 3D printed shoes to protect his hooves.

Will Byron, a fourth-year student, and Sean Bellefeuille, a fifth-year student, in RIT’s Kate Gleason College of Engineering, were experienced in designing and producing prosthetics for animals through their campus club, BioPrint, which was established in 2017. The group has 3D-printed paws for several dogs and provided a flexible hand brace that helped a local golfer get back into the swing of the game.

The two would design the initial prototype. Being more familiar with canine bodies and paws, the students had to do their homework when it came to donkeys.

“There was information about horses and other animals receiving 3D-printed prosthetics, but limited information about miniature donkeys,” said Byron. “For the first meeting with Saler, we brought along a 3D scanner, a few basic measuring tools, and the 3D-printed test piece. We found the design was almost the perfect size, it just needed to be modified to better contour the front of the hoof.”

After a check fit with the current design, the students followed up with Saler’s veterinarian and farrier to review the designs and discuss concerns. They would measure and scan Saler’s hooves to form the three-dimension picture needed to design a fitted prototype.

Working with Jewett, the design would include several different sized shoes that can be fitted to help Saler fully heal. The different sizes were all manufactured at Harbec using the models and displayed at the fitting. The shoe was CNC milled out of aluminum to allow a light yet durable attachment point to the foot. A secondary piece, similar to an orthotic wedge, was designed to progressively lower the angle the hoof creates with the ground.

“The idea is every few weeks a wedge of a smaller angle will be attached to the shoe until we get the hooves to be parallel with the ground,” said Byron. “If all goes well, Saler will be walking normally in just a few weeks.”

At the fitting, Saler was curious about the many people gathered in his stall to watch as Byron and Bellefeuille prepared to adhere the shoes. The Pinkneys held Saler as the students attached the shoe. After several attempts, some messy application of protective adhesive, Saler took his first steps with his new shoes.

A related video by John Kucko Digital is available for this story.