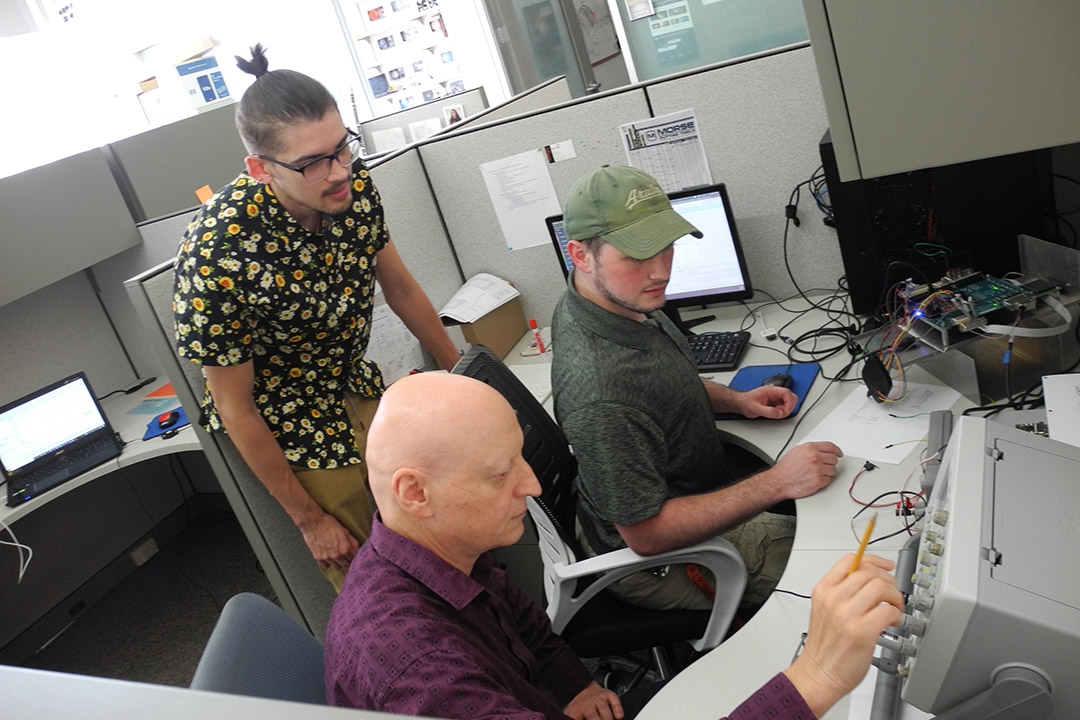 To trace the origins of the stars takes more and more powerful imaging sensors. Sidney Davis and Alberto Tabares-Galarza, members of the CSTARS-2 project, are helping to make this happen.

The two electrical engineering students are refining an attitude control system—the system that regulates spacecraft orientation—and are seeking ways to reduce the impact of atmospheric heat that changes a spacecraft’s orientation during launch.

Both students will share information about their work for CSTARS-2 during the 2021 Undergraduate Research Symposium starting July 29.

RIT will showcase a variety of research projects undertaken by students and faculty-mentors over the 2020-21 academic year during the annual Undergraduate Research Symposium, held virtually July 29 through Aug. 4. Read more about the symposium.

“This is about helping the primary camera on the spacecraft to stay on target. During flight, it goes through the launch and the atmosphere heats up so much that it typically causes warping, which has the potential to throw off the orientation of the spacecraft,” said Davis, a BS/MS student from Canisteo, N.Y. With the attitude stabilized, data acquired from the primary spacecraft sensors can be more reliable and accurate.

Davis and Tabares-Galarza are working with Dorin Patru, associate professor of electrical engineering in RIT’s Kate Gleason College of Engineering, on the CSTARS-2, which is part of the Cosmic Infrared Background Experiment – 2 (CIBER-2) led by Michael Zemcov, assistant professor in RIT’s School of Physics and Astronomy.  CSTARS-2 is integral to the success of the CIBER-2 mission, which will search for traces of the earliest stages of galaxy formation in the universe.

Interconnected projects such as these are an example of how research and experiential learning opportunities can both improve student learning and contribute to larger initiatives. Research projects can consist of shorter-term, but highly focused serial projects. Faculty coordinate different aspects of a larger project using student-researchers and can, if needed, have important technologies completed and tested in tandem.

“Once we put our equipment into the payload for CIBER-2 payload, it is very hard to take it out to test it. Since we have access to the cable harness that they communicate with, we can plug in my emulator to check various functions,” said Tabares-Galarza, who is creating an image sensor emulator in a Field Programmable Gate Array (FPGA)—an emulator to better test the new equipment. The Rochester resident came to RIT as a transfer student from Monroe Community College and is currently a McNair Scholar, an academic achievement program supporting students intending to pursue graduate education and doctoral studies.

“What it takes for students working on such projects to be successful is them being as independent as possible. Alberto and Sid have risen to the challenge and have developed the necessary skills to be independent designers and researchers,” said Patru. “That does not mean that they just go their own way. As a mentor, I work with them to outline the design and development tasks and to solve the really difficult problems. I always like to have at least two students on a project. It helps to explain to someone else; sometimes you discover your own solution in the process.”

Solutions by CSTARS-2 will be in the continued refinement of sensors to maintain the spacecraft orientation during flight. By refining attitude sensors, the larger project team continues its work on building even more sophisticated elements of the scientific payload that Zemcov and his team first launched in June, with intentions going forward for three to four additional journeys.

“The larger picture of our project is to help another,” said Davis. “It becomes a sense of community. We may not be the primary system of the project—and this is a big project—but if we can do it, we get the satisfaction of knowing we achieved this difficult thing so that we can help another team reach its full potential.”