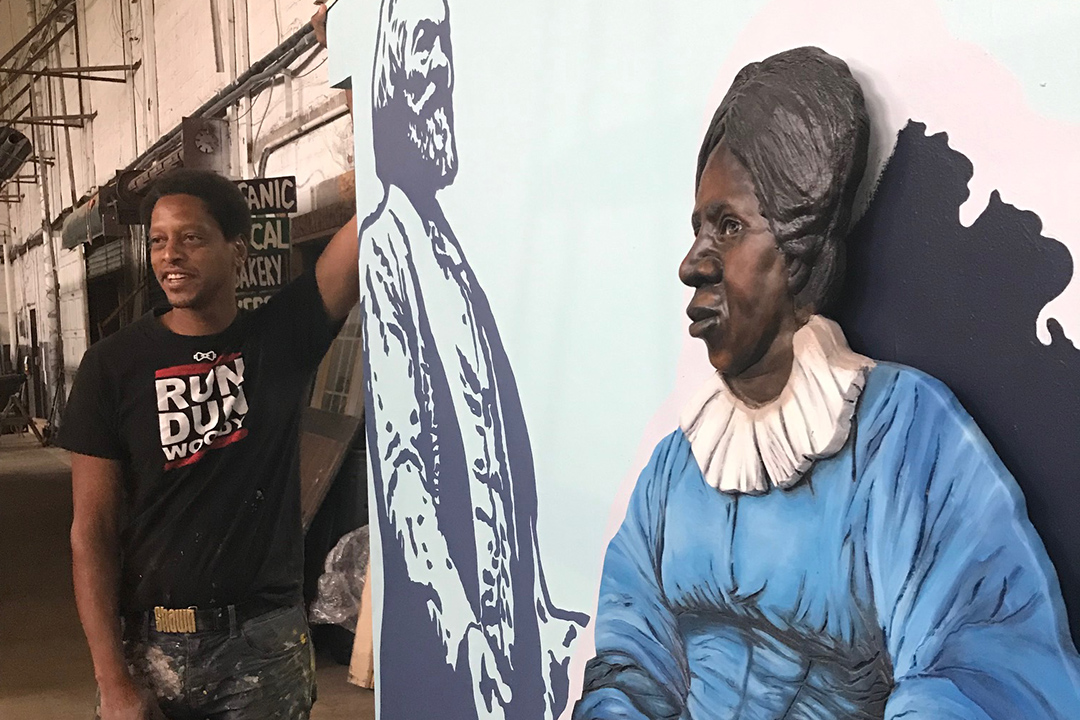 Community artist Shawn Dunwoody and his art installation of Anna Murray Douglass, which will be placed at 297 Alexander St. in Rochester, the site where she lived with her husband, activist Frederick Douglass, from 1848 to 1851.

An art installation depicting Anna Murray Douglass, the first wife of famed social reformer and abolitionist Frederick Douglass, will be unveiled today at the site of where the couple lived at 297 Alexander St. in Rochester from 1848 to 1851.

The piece, funded by Rochester Institute of Technology, was created by community artist Shawn Dunwoody and coincides with the 100th anniversary of the women’s right to vote. It will become part of RIT’s permanent collection.

“One of Rochester’s greatest assets is its rich history related to the pursuit of freedom and justice,” Dunwoody said. “I hope this installation inspires more investigation about one of our most famous activist residents.”

Rochester’s School 12, at 999 South Ave., was named after Murray Douglass in 2018, but there are very few known images of her and no other known statues or other art depictions of her, said Hinda Mandell, an associate professor at RIT’s School of Communication, who was also instrumental in having a historic marker erected at the site in 2018.

“It’s made of cast resin, she can hold up to the elements, so she’s good,” he said.

Murray Douglass was married for 44 years. She is described as quiet and private and ran the house as her husband traveled out of town, meeting with dignitaries and years later, consulted President Abraham Lincoln who abolished slavery.

Dunwoody said there are only two pictures of Murray Douglass he could use as reference, “and there’s not much written about her either. She was the backbone of the Douglass family and needs some attention. I think she would say, ‘You don’t need to do this, don’t bring attention to me.’ But I think deep down she would appreciate it.”

RIT sources of funding for the project include the College of Liberal Arts, College of Art and Design, MAGIC Spell Studios, Division of Diversity and Inclusion, the National Technical Institute for the Deaf, digital humanities and social sciences program, School of Individualized Study, School of Communication, the William A. Kern Professorship and the Department of History.