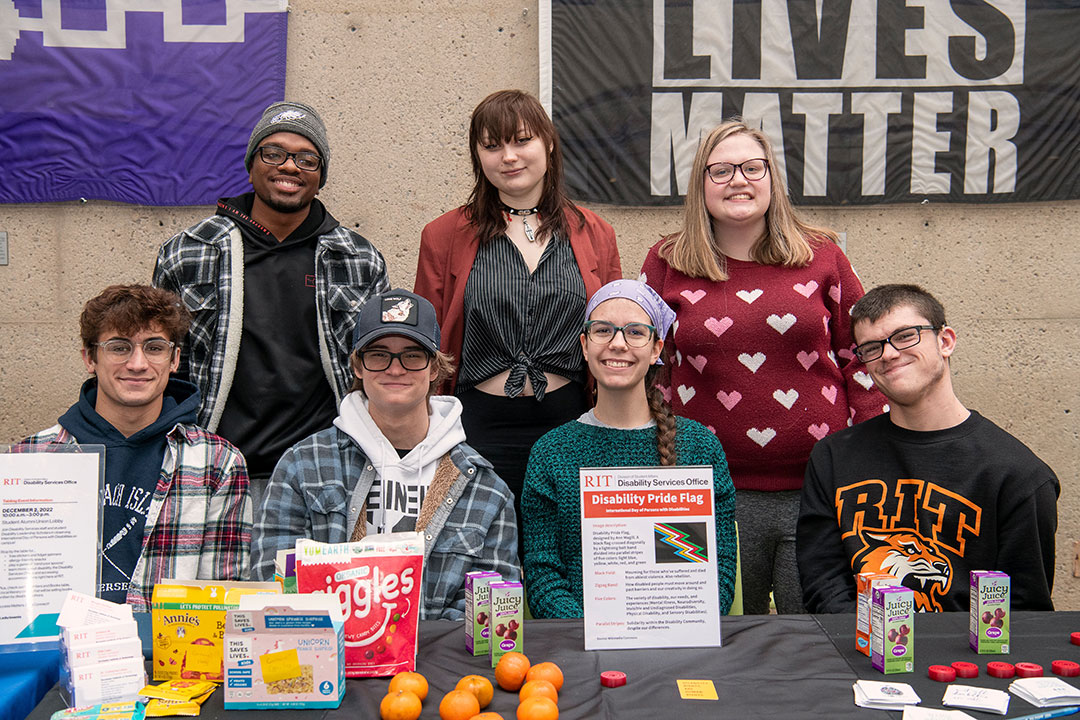 Eight first-year Rochester Institute of Technology students have been selected to become the university’s first Disability Leadership Scholars to advocate and to educate about disabilities.

“I’m honored to be chosen as part of this group,” said Gavin Morrobel, a business exploration student from Scotch Plains, N.J. “I really want to spread awareness about disability rights and make people more comfortable talking about their experiences, knowing there are other people out there like them with similar experiences they can talk to.”

Just prior to the semester, the scholars received a three-day orientation, where they met with internal and external speakers who talked about disability justice, access in college, mental health, accessible technologies, and other topics.

“Here at RIT, it’s so diverse and there are so many different types of people and so many disabilities here that not everything is the same for everyone,” Morrobel said. “It’s important to ask questions and to just really ask and be open with the person with a disability and be helpful.”

Catherine Lewis, director of the Disability Services Office, said an estimated 3,500 RIT students this year identify as disabled and receive accommodations. Disability can be apparent, hidden, temporary, permanent, lifelong, or acquired later in life. The experience of disability is different for everyone, even when they share the same disability type. 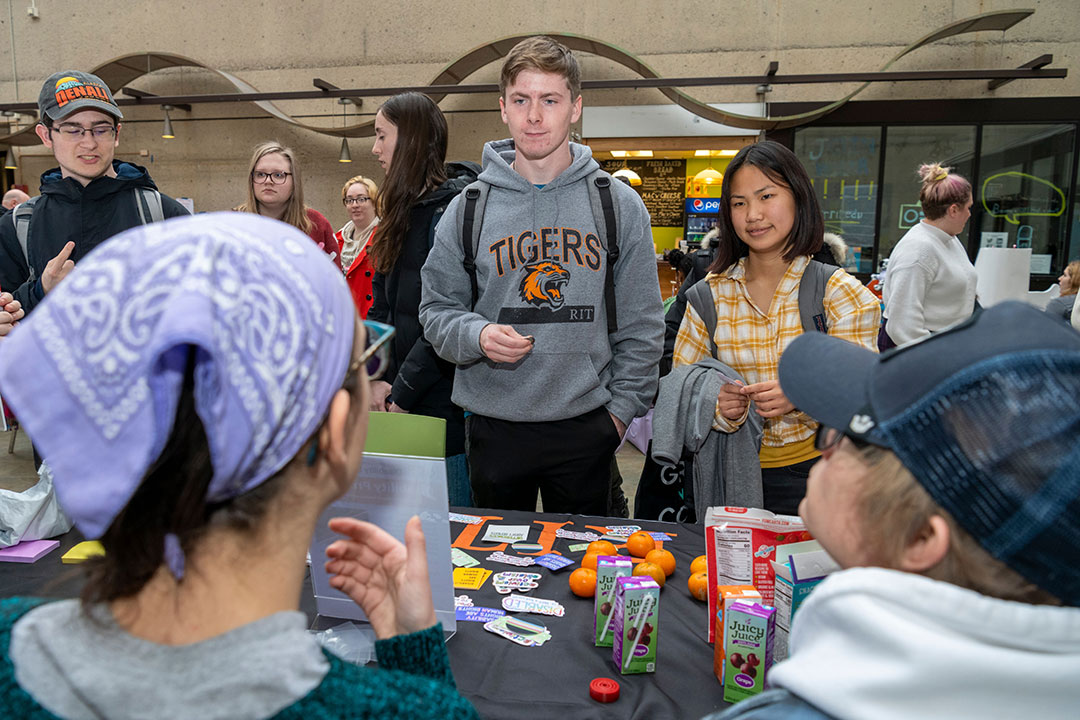 Brendon Busch, a first-year mechanical engineering major from Hamburg, N.Y., stopped by a table in the Student Alumni Union lobby staffed by Disability Leadership Scholars to learn more about the program. He was with Emma Klinke, a first-year physician assistant major from Abington, Pa

The Disability Leadership Scholars program was launched with support from Microsoft to celebrate and recruit students with disabilities to RIT in a new and innovative way. In 2021, Microsoft named RIT a Microsoft Accessible University, one of six universities to receive that designation. RIT’s National Technical Institute for the Deaf matched dollars awarded from Microsoft, allowing RIT to double the program’s size and impact.

“We recognize an admissions office cannot inquire about a student’s disability status,” Lewis said. “But that doesn’t mean we can’t embrace and celebrate disability as diversity when students share that part of their identity with us voluntarily.”

Disability Services designed a program based entirely on student self-nomination and shared the opportunity with high school counselors and community groups nationwide. The application was intentionally not medical in nature, but rather focused on students’ understanding of disability as a social and political identity. Questions included what changes they wished to see in the disability community, what impact the COVID-19 pandemic has had on accessibility, and more.

About 50 students applied for the program. Finalists were interviewed and awardees were selected, each receiving a one-time scholarship.

In December, scholars staffed a table in the Student Alumni Union in honor of the United Nations International Day of Persons with Disabilities, which is held Dec. 3. This is the first time the event has been celebrated on campus. 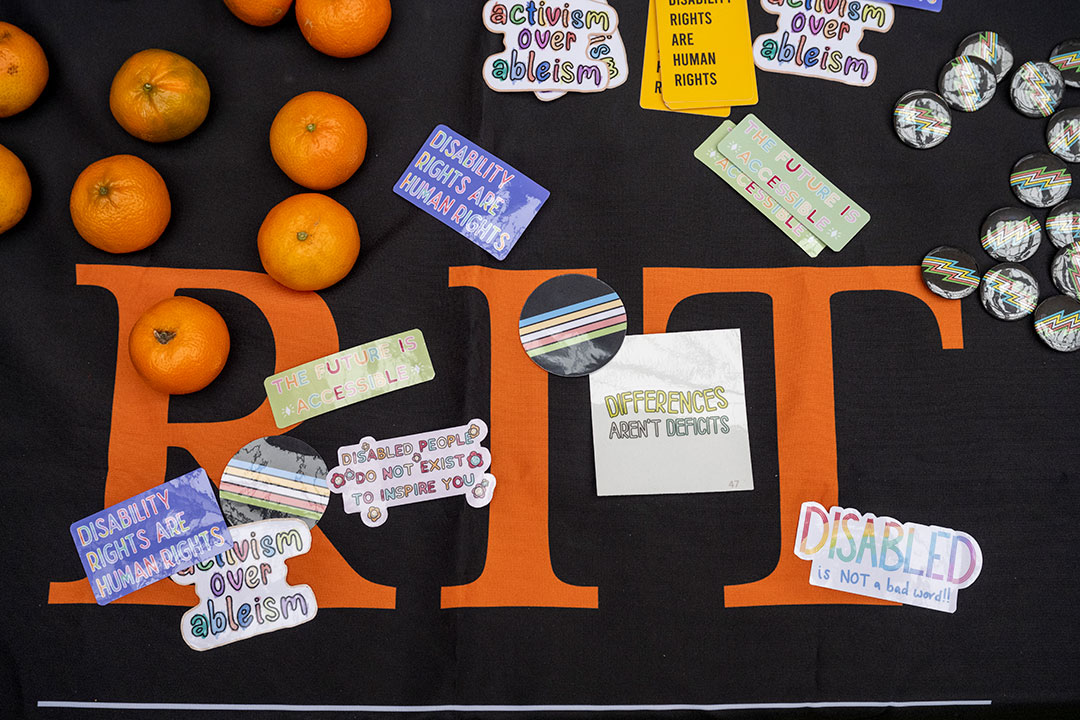 Allergy- and gluten-free snacks, as well as buttons and notes, filled an information table in the Student Alumni Union commemorating International Day of Persons with Disabilities.

Being an advocate isn’t new for Morrobel. He has Usher syndrome, a condition that rendered him deaf at birth and is gradually taking his vision. He has been educating others by speaking to groups and making videos in recent years.

Usher syndrome hasn’t made him stop enjoying what he likes. He made friends this semester when he played intramural flag football and volleyball, and he intends to start club swimming next semester.

“Whenever I have new friends, I always tell them about my disability upfront and honestly because I need help in some situations and they may not know that,” he said. “So for my sake, I tell them, and because I tell them, I’m educating them just because I need them to know how they could help me.”

John Schulz, a first-year computer engineering technology major from Milwaukee, Wis., is deaf and has cerebral palsy. He said he applied “to help spread awareness and advocate for disabilities on campus.”

He’s also enjoying being with his fellow scholars in the program.

Several of the students recently attended a “No Voice Zone” event, where about 60 other students gathered to learn and use only sign language to communicate with one another. 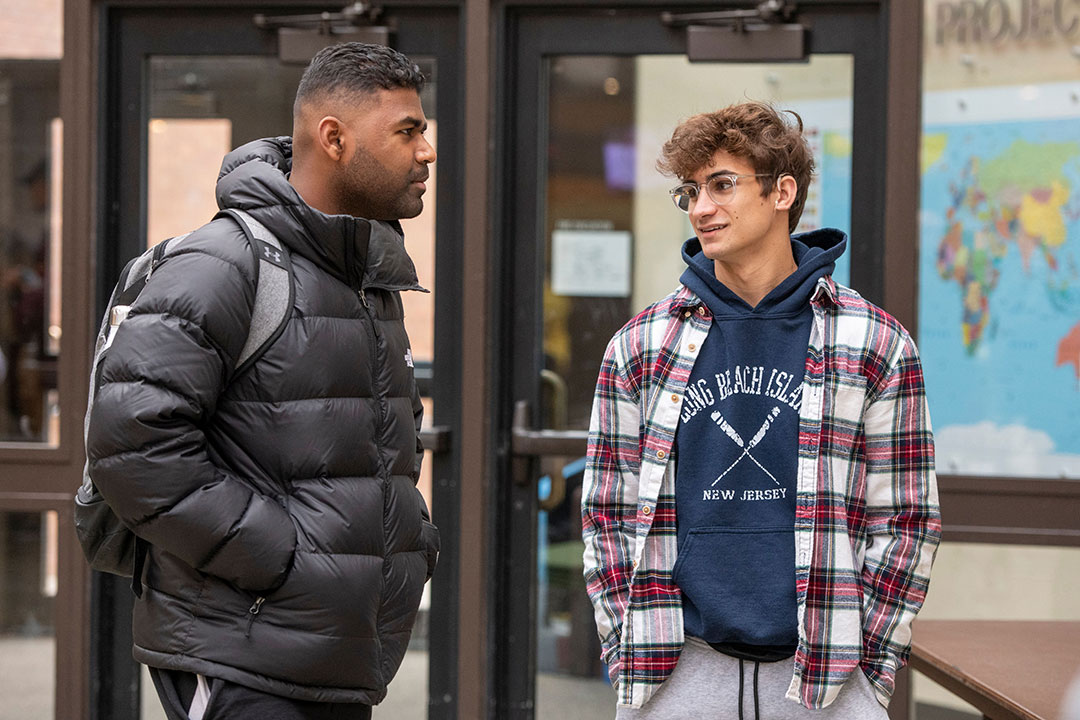 Josh Samuel, left, a third-year new media interactive development major from Mt. Olive, N.J., meets Gavin Morrobel, a Disability Leadership Scholar, during a recent event in the Student Alumni Union to commemorate International Day of Persons with Disabilities. They talked about things they had in common, including both being from New Jersey.

“It was really nice to educate people about the terminology,” Schulz said. “For me personally, I love questions. It helps to deconstruct stereotypes that may drift around my disabilities. As a society, we tend to tell people not to ask questions, so people tend to be assumptive. Sometimes people associate my spasticity with being nervous. Sometimes that’s true, but generally that’s not the case.”

“That’s my goal because they use a lot of technology and audio processing,” he said.

His fellow scholars are just as excited about sharing their experiences, quelling stereotypes, and connecting with other students.

“We definitely want to help build up the disability community at RIT,” said Maggie Boyle, an ASL-English interpretation major from Glenwood, N.Y. “It’s important to have the support of this community because we share this wonderful thing. We want to reach out and be ambassadors to all students who have a disability.”

“I’m really passionate about what people in education can do to make people with disabilities feel they belong and have support,” said Eliot Gavin, an undecided major from Conesus, N.Y.

Tre Reese, a computing and information technologies major from Rochester, said he wants to lessen the gap between able-bodied people and those who have a disability, “to erase the stereotype that people with disabilities are somehow less than equal or can’t do things that other people can do.”

At their information table in the Student Alumni Union, visitors were encouraged to post notes about what “disability” means to them, and chat with the students.

“Disability helps me express myself,” said one note.

“A disability can be an asset, leading to innovation and creativity not in spite of it, but because of it,” said another note.

One of the scholars, Valen Hay, a web and mobile computing major from Chatham, N.Y., drew pictures on the notes of dogs and cats and hearts. “I prefer to use pictures instead of words,” they said.

And the connections are already being made. Brendon Busch, a first-year mechanical engineering major from Hamburg, N.Y., stopped by the table to learn more about the students.

“It sounds interesting, I’d like to be more involved on campus,” said Busch, who wears a hearing aid. “I’m hard of hearing. It’s nothing to be ashamed about.”

Another passerby, Josh Samuel, a third-year new media interactive development major from Mt. Olive, N.J., stopped to chat with Morrobel. They discovered they had a lot in common, including both being from New Jersey.

Lewis said all of the scholars are first-year students.

“Navigating disability in high school is very different than in college,” she said. “We wanted to connect with students right at this pivotal moment where they transition from their K-12 accommodations to their higher education environment. Our goals have been to bridge some of the knowledge gaps, bridge some of the resource gaps, and create a warm, proud disability community right around the moment they start college. In doing this, our students start their first semester knowing how to access resources, advocate for their needs on campus, and arrive secure in the knowledge that they’re part of an incredibly robust disabled community at RIT and beyond.”

In addition to the Disability Leadership Scholars, two other groups addressing disability issues on campus have formed this semester: The Student Disability Culture Club and the Student Government Accessibility Committee.

In addition to getting the scholars to feel connected and supported, Lewis said she hopes to employ them as peer mentors as early as the next academic year. The spring semester will bring more on-campus programing, film screenings, and open mic nights about disability identity.

Lewis is quick to remind others that a disability shouldn’t be viewed as a medical diagnosis, but as a social, political, and cultural identity.