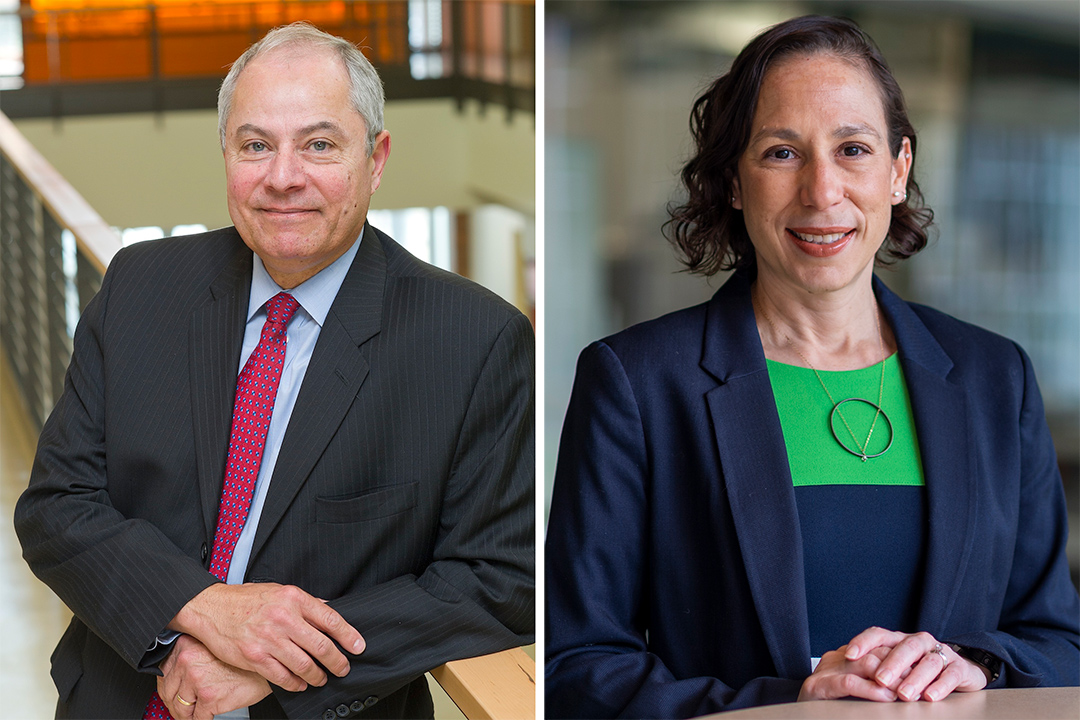 The Institute of Industrial and Systems Engineers (IISE) has named two Rochester Institute of Technology engineering innovators as Fellows, an honor that recognizes outstanding leaders of the profession who have made significant, nationally recognized contributions to industrial and systems engineering.

Nabil Nasr, associate provost and founding director of RIT’s Golisano Institute of Sustainability, and Iris Rivero, head of RIT’s Department of Industrial and Systems Engineering, will be recognized with the organization’s highest award during IISE’s virtual Conference & Expo on May 24. They are believed to be RIT’s first IISE Fellows.

“What a tremendous honor to have two of RIT’s world-class researchers named IISE Fellows in the same year," said Ellen Granberg, provost and senior vice president for Academic Affairs. “Nabil Nasr and Iris Rivero have led groundbreaking research in a wide range of industrial engineering initiatives that have had a global impact. This is a well-deserved honor, and I am pleased to offer both my congratulations on their remarkable achievement."

Throughout his career, Nasr has worked in the fields of circular economy, sustainable manufacturing, remanufacturing, and cleaner production and is considered an international leader in research and development efforts in those disciplines. He has served as an expert delegate for the U.S. government in several international forums, including the Asia Pacific Economic Cooperation (APEC), the United Nations, the World Trade Organization (WTO), and the Organisation for Economic Cooperation and Development (OECD). Nasr is also a member of the International Resource Panel (IRP) of the United Nations Environment Programme (UNEP).

In addition to serving as a trustee of the Ellen MacArthur Foundation in North America, he is CEO of the REMADE Institute, a national Manufacturing USA initiative focused on reducing embodied energy and decreasing emissions in manufacturing.

“I am honored and humbled to be recognized by IISE, a professional society I joined as a student a long time ago,” said Nasr, an advisory board member for The CLEEN Project, which is providing federal leaders in the Biden administration with ideas to combat climate change and advance climate justice. “From teaching to management and technology development, I have continually focused on applying the system thinking and approaches that IISE promotes.”

Since arriving at RIT in 2018, Rivero has led research in the areas of polymer and metal composites for 3D-printing, environmentally friendly remanufacturing of metal components for industrial uses, and bioprinting for tissue engineering and antibacterial wound healing treatments.

She also is a staunch advocate for more women in engineering and has been instrumental in supporting K-12 outreach to recruit and retain an even more diverse student body as well as provide opportunities to advance female faculty within the college.

“We are seeing a culture change in engineering with more women in careers—including academia—and recognitions like this bring more awareness to our profession and the remarkable women who contribute to it every day,” said Rivero, one of the first Hispanic women to be named an IISE Fellow. Rivero called earning the Fellows recognition “one of her proudest moments,” since the prestigious designation recognizes, in large part, her research initiatives in diverse engineering disciplines since coming to RIT.

Currently, Rivero is also participating in the Executive Leadership in Academic Technology, Engineering and Science, also known as ELATES. The national program, based at Drexel University, is designed to prepare senior women faculty for leadership roles within their respective institutions.

Outside of academia, Rivero worked in the engineering departments of Honeywell Engines & Systems and at Detroit Diesel Corporation and has been a Research Fellow at NASA’s Marshall Space Flight Center. In 2012, she was named Woman of the Year in higher education by the Hispanic Association of Women.

IISE is the world's largest professional society dedicated solely to the support of the industrial engineering profession and individuals involved with improving quality and productivity. Founded in 1948, IISE is an international, nonprofit association that provides leadership for the application, education, training, research, and development of industrial engineering.