Professor Alan Nye zooms to retirement after 45 years at RIT 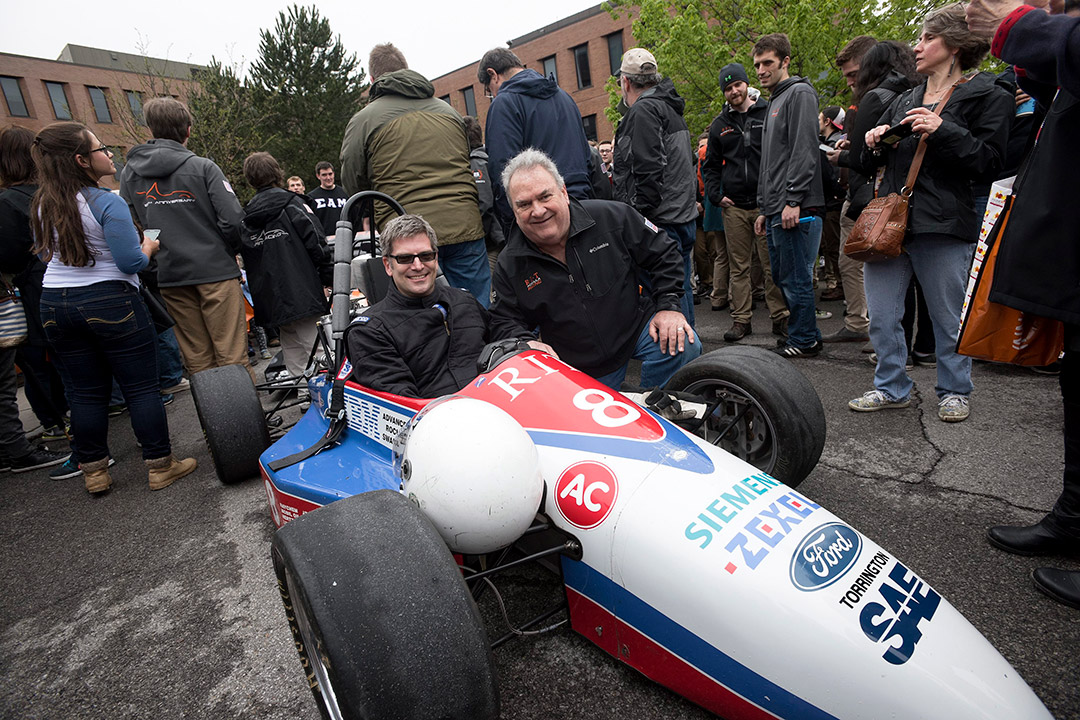 If it had wheels and raced, Alan Nye had a part in it.

The professor of mechanical engineering, who will retire this summer, has successfully navigated 45 years of teaching and advising engineering students and RIT’s championship Formula racing team. 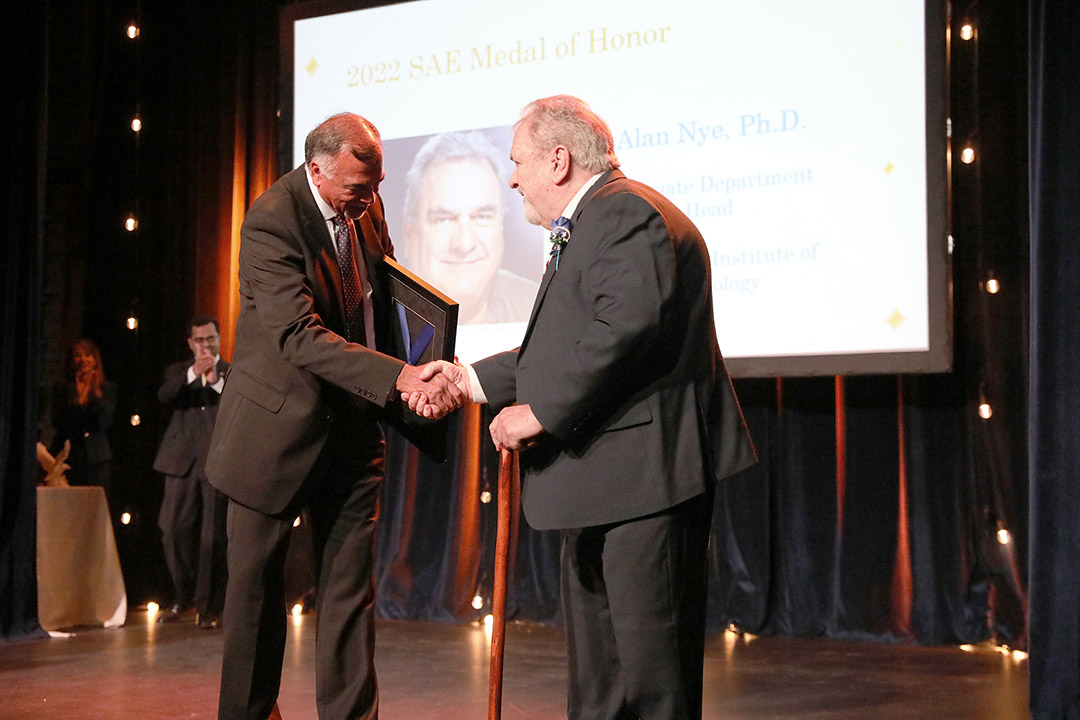 RIT Professor Alan Nye, right, receives the SAE International Medal of Honor from the organization’s board president, Sri Srinath, during a recent ceremony in Detroit. He was honored for making unique and significant contributions to SAE and the automotive industry.

It is significant that Nye won the SAE medal and announced his retirement from RIT’s Kate Gleason College of Engineering at about the same time. He has a long, tight-knit history with both.

Nye immersed himself in SAE’s professional community as well as its student-centered programs. Twice in his career he served on SAE’s national board and, over many years, led its regional professional chapter while establishing RIT’s student chapter. SAE coordinates major collegiate design challenges like Formula, and Nye started several of RIT’s longest running—and most successful—race teams, including Formula and Baja.

Nye’s achievements are visible—as a strong faculty member, including time as visiting faculty with the Naval Research Laboratory in Washington and the Institute for Astronomy at the University of Hawaii, but also in the many successful engineering alumni he has influenced. 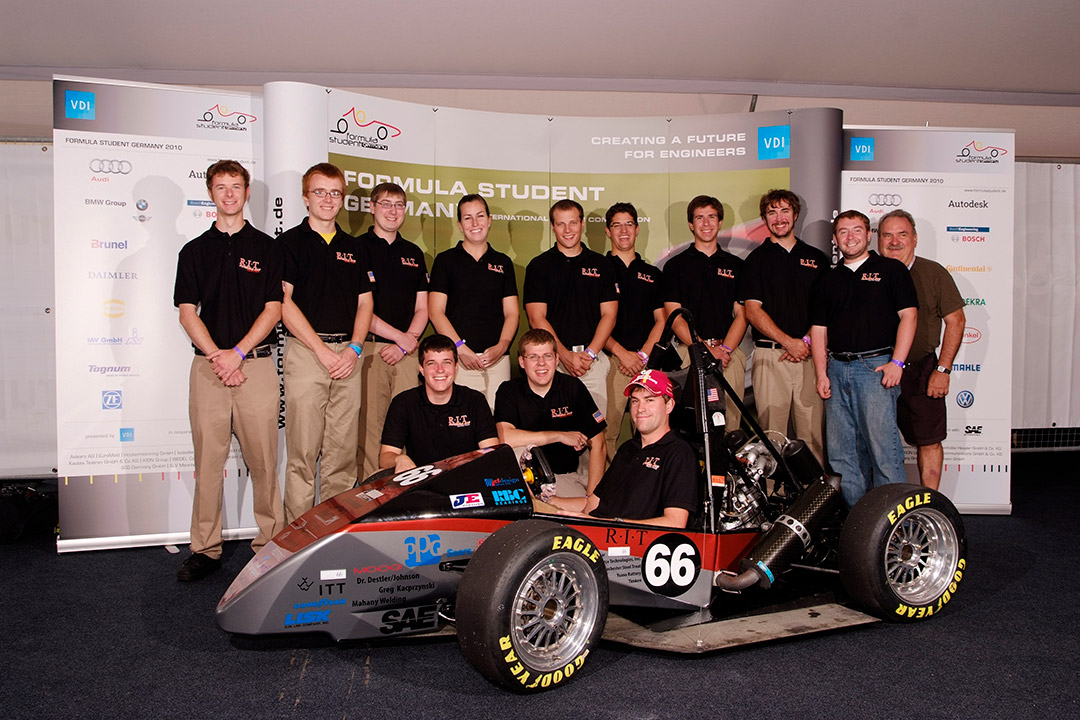 RIT’s Formula race team consistently ranks among one of the best U.S. teams in its competition history. One of its highlights was its Top-10 ranking in the world after international competitions.

“Alan has had an impact on so many students over the years. He is warm and down to earth. I think students can see that he is truly on their side,” said Risa Robinson, department head of mechanical engineering. “Alan has a calming presence. His mantra was, ‘Don’t sweat it.’ He has such a positive outlook on life and RIT. He loved RIT and he loved students. That’s why he stayed so long! He will truly be missed.”

Nye came to RIT in 1970. He would pursue his interests in autos and get his doctoral degree in mechanical and aerospace sciences from the University of Rochester. Shortly afterward, he did post-doc work in New Mexico’s Sacramento Peak Observatory researching the magnetic and electrical properties of the solar atmosphere. In 1977 he returned to teach courses at RIT in these areas as well in materials, dynamics, and alternative fuel technologies while serving as associate department head for 19 years.

But it was how Nye helped students apply what they learned that set him apart.

“I would tell them, the best thing they can do is join one of these competition teams. You have to go to class and do your homework, but there will still be time left over. What you do with that time can make all the difference in your career.”

His students have gone on to make a difference in aerospace, communications, and medical device companies—as well as various automotive organizations. 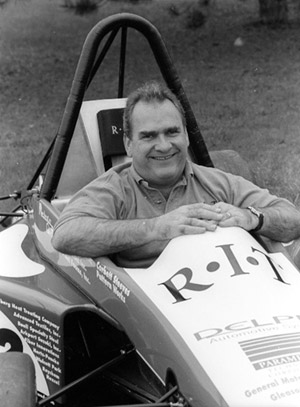 Nye immersed himself in SAE’s professional community as well as its student-centered programs.

While Nye took a hands-off approach to the actual race car build process, he was always available for advice and encouragement.

“It is their car, their designs. They have to build it; they have to learn and they have to live with it. If something goes wrong, it was their decision. When things go wrong, that’s when you really learn,” said Nye, who would be recognized seven times as SAE Outstanding Faculty Adviser.

Combining cars and learning opened the door for him to get to know the students beyond the classroom and machine shop. Lasting friendships were built alongside the race cars.

“I can’t tell you how many weddings I’ve gone to,” he said. “They are friends, and it means a lot to me. It is different than the classroom, where you are lecturing, interacting, answering questions, but you don’t always get the chance to spend as much time in more casual situations as you do with the competition teams. It’s like family… You never lose that.”

Nye will keep up with the team, and possibly teach part time. His newest avenue is collecting classic cars. He’s working on acquiring his third, a 1929 Ford Model A Roadster convertible with a rumble seat to go with his restored 1925 Chevrolet Superior and 1966 Mustang Fastback, just like one he had in college.

“My wife, Nancy, loves old cars,” Nye said. “The idea is to go to car shows, get into parades, things like that. The roadster? I’m tempted. We don’t exactly have enough room to park all these cars. Maybe the Formula alums can help build a barn for the cars—and they can all work on the cars with me!”

Mechanical Engineering Professor Alan Nye taught and mentored many students in his 45 years at RIT, and several shared sentiments about how influential he was to them in their careers and in life. More comments can be found on the Honoring Alan Nye website, hosted by RIT Advancement.

“I’ll never forget the day I stumbled into Dr. Nye’s office looking for info on a summer class. It was after that memorable meeting that I went home to my parents and unexpectedly proclaimed, ‘I’m transferring to RIT, I’m joining the Formula SAE team and I’m quitting soccer and my current university in D.C.’ In one meeting with Doc, the course of my life and the success of my profession was forever changed! And, most importantly I met a mentor and lifetime friend. Doc is one of a kind!”

Lynn Bishop ’93 was one of the founders of RIT’s Formula team. He is founder/president of Vy Venture Group, LLC, after 18 years in leadership positions with Pratt & Miller Engineering, and his own automotive company, Aletheon Technologies.

“Dr. Alan Nye’s vision to create and build the SAE Collegiate programs at RIT has provided thousands of students with invaluable real-life engineering, business, and leadership skills heading into their professional careers. But, even more meaningful, Doc has been a selfless mentor and friend who has offered his support, guidance, and encouragement to succeed in all aspects of life. Doc Nye continues to be a dear friend to this day and I, along with many others, am forever grateful to be benefactors of his passion and dedication to serving students around the world.”

“My experience at RIT and beyond was enriched immeasurably by his friendship and guidance. The fact that the RIT Formula Racing Team is approaching its 30th anniversary and has such an impressive record of success is a testament to his leadership style and the motivation he provided to the students over the years. With so many alumni fortunate enough to benefit from his mentorship, it can truly be said that he has made an impressive mark on the forward progress of technology and industry in this country.”