Sculpture intended for permanent display at Douglass airport in Rochester 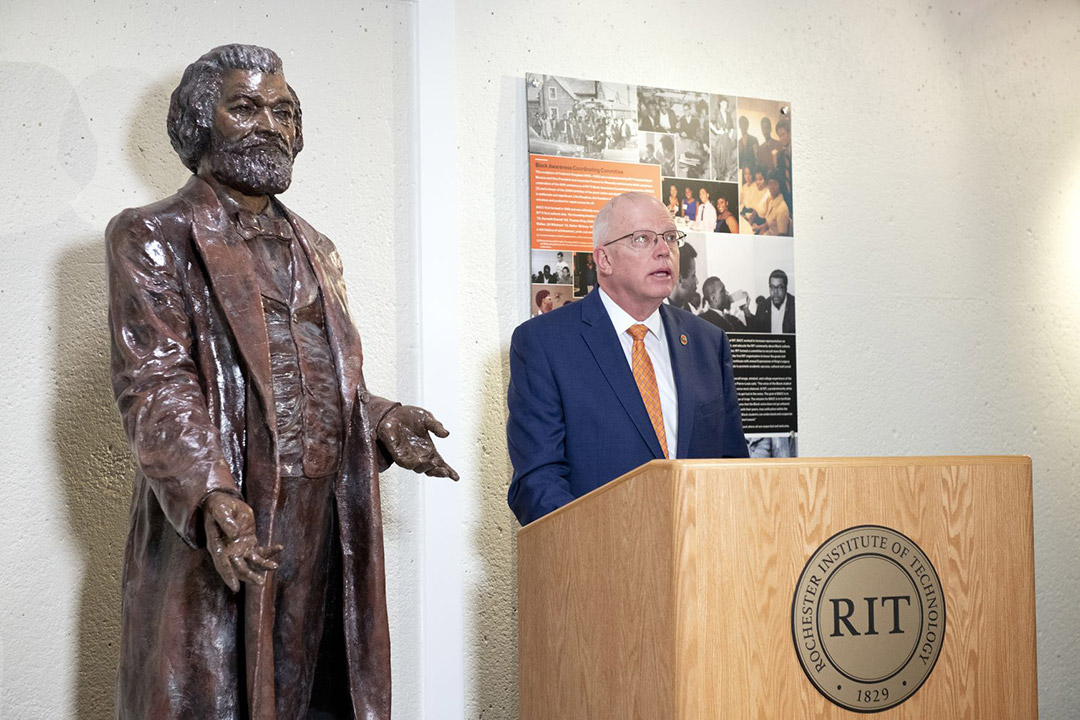 President David Munson delivers remarks during a ceremony unveiling a sculpture of Frederick Douglass in RIT’s Student Alumni Union in 2020. Olivia Kim is hoping to create a permanent bronze sculpture of Douglass at Rochester’s airport by the end of this year.

Efforts are in motion to commission a permanent bronze statue of Frederick Douglass sculpted by Olivia Kim, an adjunct professor in RIT’s College of Art and Design, for the Frederick Douglass Greater Rochester International Airport.

A fundraising drive led by the not-for-profit Rochester Community Television (RCTV) aims to raise $250,000 for Kim to create a bronze Douglass statue—inspired by the 1899 statue in Rochester’s Highland Park—and a surrounding educational display at the airport.

In 2018, Kim made 13 bicentennial Douglass sculptures in less than seven months with the help of more than 150 volunteers, including a number of RIT community members, to station at historical locations throughout the city.

The university later unveiled another of Kim’s Douglass sculptures—commissioned by RIT President David Munson and Vice President and Associate Provost for Diversity and Inclusion Keith Jenkins—in the Student Alumni Union during a ceremony in October 2020.

“Who knew that we would make something that would have such a potent effect on the world?,” asked Kim, citing the renaming of Rochester’s airport after Douglass earlier this year.

“This time I’m making him better than ever,” added Kim, who teaches figure sculpture in the School of Art.

While working to create a bronze figure of the famous humanitarian and abolitionist will not require the large number of volunteers like in 2018, Kim said “the message of Unity and Universal Freedom underlying this project has never been so significant nationally and internationally.”

“A statue dedicated to Douglass’ memory inside the Rochester airport named in his honor would inspire us to remember our indelible connection to one another,” she added.

RCTV Project Director Carvin Eison also hopes it will send a powerful message to “help set the nation on a course toward reconciliation, healing, and unification.”

“Adding Morris’ features to this sculpture reminds us that Douglass’ struggle for humanity continues on to this day, and is guarded by our own efforts to discern what is truly respectful of all life,” Kim said.

Go to The Douglass Tour website for information and donation details.