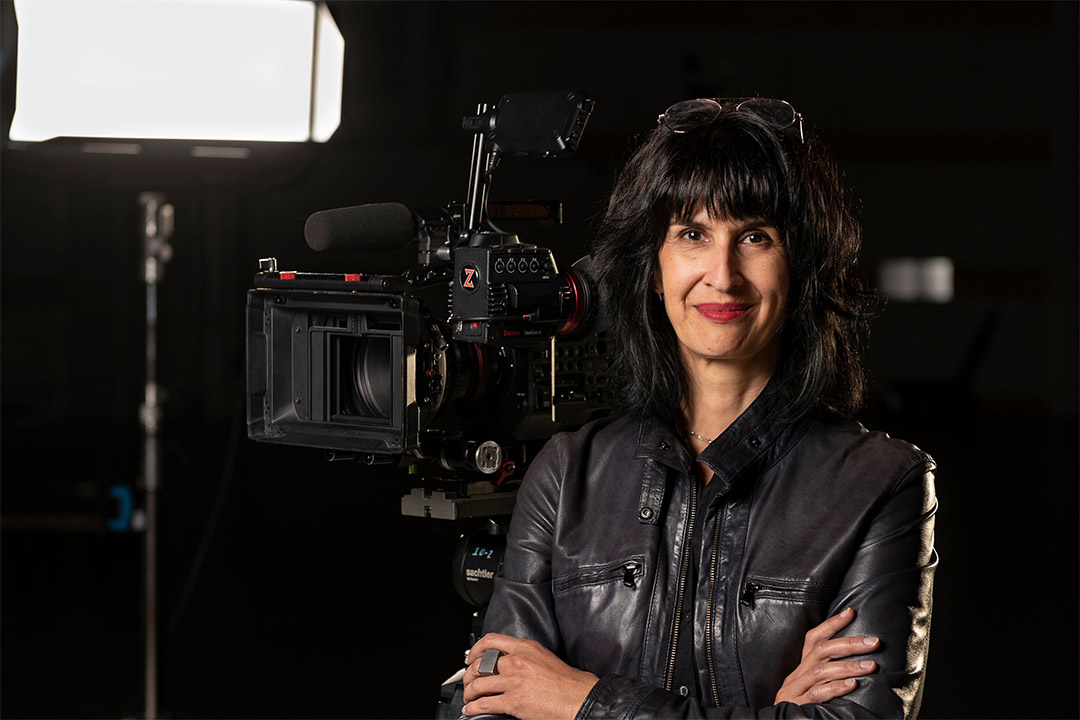 Shanti Thakur, an award-winning fiction and documentary filmmaker with a strong focus on creative collaboration, is the new director of RIT’s School of Film and Animation.

Shanti Thakur—who began her new role as director of RIT’s School of Film and Animation in the College of Art and Design earlier this month—is an award-winning fiction and documentary filmmaker who has taught for nearly two decades. As writer, director, producer, and editor, Thakur’s films have screened at more than 200 international film festivals and museums, including the Cannes Film Festival, Museum of Modern Art in New York City, and the Montreal World Film Festival. Her work has garnered scores of awards and been broadcast in 22 countries.

A native of Montreal, Thakur has directed films at the National Film Board of Canada and through her company, Lucida Films, LLC. She comes to RIT with 19 years of teaching experience from Hunter College, City University of New York, where she taught and mentored both graduate and undergraduate students after holding faculty positions at Hofstra and Temple.

Welcome to RIT. How did it feel to be named the new school director of RIT’s School of Film and Animation (SOFA)?

I’m honored and excited to begin this new journey at SOFA. It is an oasis of creativity, with state-of-the-art technology, talented faculty, and students.

You direct both fiction and documentary films—do you see a commonality in the stories you tell?

I’m drawn to telling stories about outsiders who are trying to find their place in the world. I build the characters’ point of view by developing their dreams, memory, and history to understand their actions. This translates, for example, to my documentary about aboriginal restorative justice in the Yukon (Circles) and to a science fiction film about a man trying to find his identity in a world where everyone’s memory lasts a few hours (Red Tulips, A Story About Forgetting).

Is there a particular film you’ve made of which you’re most proud?

I’m very excited about my latest film—a feature documentary, Terrible Children. My father received a letter from his father in India, and only opened it 20 years after his death. When he gave me this letter, it unraveled the events that led to my father’s banishment from his family, after marrying my Danish mother. The film is a compelling journey that reveals my father’s childhood—from family violence and Muslim-Hindu bloodshed during India’s Partition to training in a paramilitary group and finding his chosen family. Told through personal narrative, reimagined history, and chronicles of racial nationalism, the film reveals the rich and complex interior lives of boys fighting to become men. Mark Lipson is the executive producer (producer of Errol Morris’ The Thin Blue Line, Tabloid, and many others).

How would you describe your teaching style?

I want my students to be fearless. Making by doing is important. The spine of any project is led by the story and how technology serves it. I teach a vast range of fiction and nonfiction film, both national and international, so students develop a nuanced visual vocabulary. They end up creating unexpected visual storytelling that surprises.

I integrate other disciplines as examples: VR (virtual reality), theater, photography, and video installations, where makers ask the same questions—but answer with very different visual strategies. Exciting student work has been through collaboration across different disciplines. What happens when a filmmaker works with a choreographer? A VR person works with a theater student? An animator works with a journalist? Creative risk brings reward.

After this year’s Oscars, do you feel female directors are finally getting their just recognition?​

Women will have just recognition when we no longer need to comment on it. That will be an awesome day.