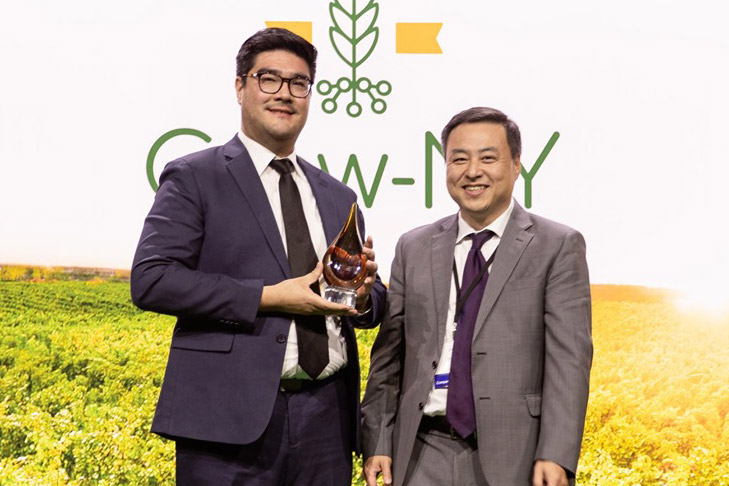 Industry estimates show that more than 60 million gallons of Greek yogurt are consumed in the United States each year. According to Juan Guzman, co-founder and CEO of Capro-X, the problem is that each cup of Greek yogurt produces more than 3 cups of waste, also called acid whey.

“The Greek yogurt industry is booming,” said Guzman. “But every day, Greek yogurt producers in New York have to deal with 300,000 gallons of acid whey waste. Most of it is trucked around to local farms for feed and fertilizer, but the remainder is sent to wastewater treatment plants at a significant financial and environmental cost. By treating just 10 percent of the acid whey produced in New York, our company can yield 500,000 gallons of sustainable chemicals each year.”

Guzman also said that the company’s solution to the problem will prevent 100,000 tons of greenhouse gas emissions caused by transporting the waste.

Nearly 200 food and agriculture startups applied for the competition, with the top 17 finalists matched one-to-one with experienced entrepreneurs from the region who served as mentors.

Circle Optics has created the world's first parallax-free, 360-degree camera that solves the problem of stitching (putting together multiple images pixel by pixel to create one big image). The system instantly captures a perfect 360-degree representation of any scene, which is useful in the virtual reality, security, mapping and robotics industries. Current solutions create extraneous data from overlapping fields of view, require significant additional time and money in post-processing and often produce an imperfect scene with obvious seams and holes.

Venture Creations was created in 2003 to provide services to incubating companies, facilitating the development and operation of these companies for the purpose of advancing the educational and research missions of RIT through the enhancement of faculty, student and staff involvement in high technology. It was also created to promote economic development and competitiveness in Monroe County and New York state by encouraging and facilitating the transfer of technology resources to the marketplace. The total number of launched companies now stands at 42, with 559 jobs having been created.