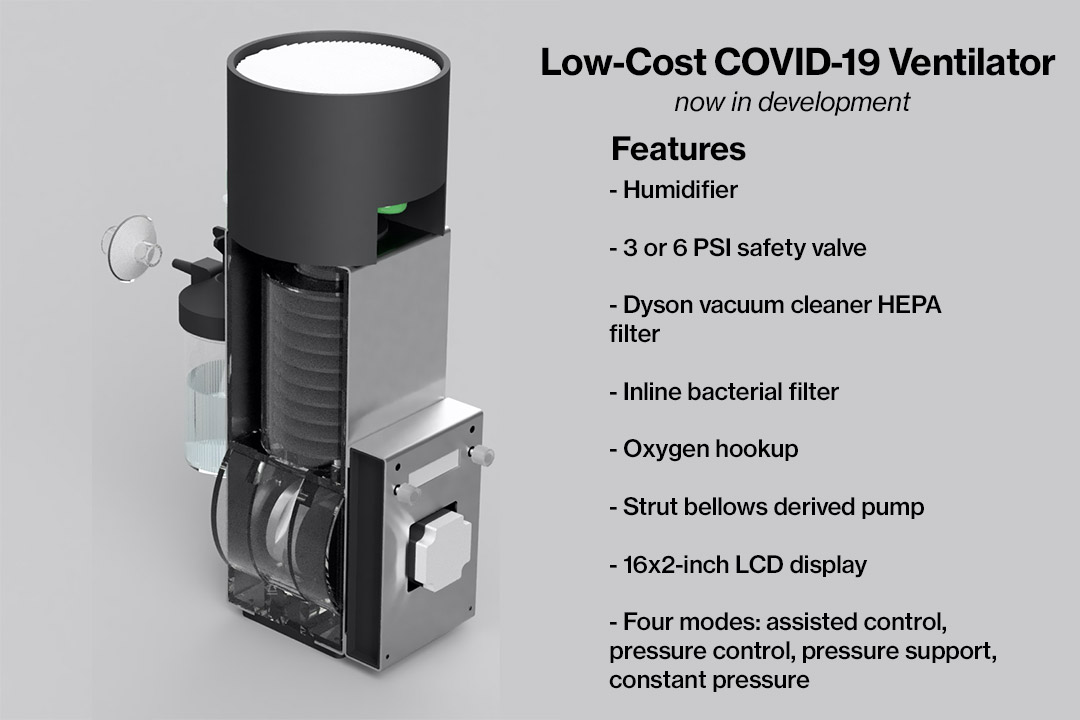 This sample design is being prototyped by an RIT alumni team to meet the need for emergency ventilators to support the medical community.

In early March, RIT alumnus Corey Mack ’11 (mechanical engineering technology) received an email from the U.S. Department of Defense asking start-ups and entrepreneurs to build emergency ventilators for under $300. Mack also was keeping up with news in New York state and heard the governor’s call for masks, shields, and ventilator equipment.

“He said, essentially, if you have a way to help, then I’ll invest.”

After looking through company patent information and a YouTube influencer who does videos for medical school students to understand the equipment they’ll eventually work with, Mack saw the ventilator problem as simple pneumatics.

“Not exactly simple from a regulations perspective, but it is an air pump and some valves,” said Mack. Within a few days, his idea became a design that complied closely with the required pieces of emergency ventilators.

Once Mack put that design up on his Facebook site, he had a groundswell of help from a familiar community—RIT alumni, former faculty, and friends of the university. The project is called Covid19Vent.

The RIT alumni family understood the lengthy and demanding FDA process—which includes documenting in detail where and how each of the parts was produced, said Mack, who called upon classsmates from RIT’s College of Engineering Technology.

Another aspect for his team is setting up the production process of building components for the device that could be used within hospitals or free-standing emergency set-ups in communities.

Some of those components could be 3D printed, and several resources emerged with on-campus support from Mike Buffalin ’15 (mechanical engineering technology), manager of RIT’s makerspace, The Construct ; alumni such as Andrew Kowalczyk ’18 (electrical engineering) from D3 Engineering; and former faculty members such as Chance Glenn.

Buffalin consulted on the design and 3D-print capabilities for prototyping. This is one of several regional projects he has been involved in where 3D-print technology has contributed to the rapid manufacture of parts and equipment.

Providing the system architecture expertise necessary for the ventilators, Kowalczyk saw the work as a priority and a way to close the gap of needed equipment.

“This will provide a low-cost ventilater that is easy to manufacture, simple to use, and easy to distribute to hospitals that don’t have enough ventilators on site,” said Kowalczyk, who is a hardware engineer with D3 Engineering. “My experience with prototype electronics will hopefully speed up getting the electrical aspects of this project up and running.”

Glenn, currently the provost at the University of Houston-Victoria, was a faculty member in RIT’s College of Engineering Technology teaching in the manufacturing and mechanical engineering technology program. In addition to overseeing the academic portfolio of the University of Houston-Victoria, Glenn is in the process of establishing a new engineering program and he offered its fledgling 3D-print services.

“While New York state is a hotspot in the U.S. right now, this will cascade over much of the country. This is an ‘all hands on deck’ moment,” said Glenn, who had remained in contact with Mack, his former student, and also started his own media and electronics companies. “Efforts like this can impact this state, the nation, and the world. People are beginning to realize this and are stepping up.”

Funding was essential and some has come directly from individuals and gifts in-kind of necessary software and expertise to implement designs. AutoDesk has been instrumental in this respect, said Mack.

Several ventilator prototypes are now being built and tested. Mack will be in New York to participate in that testing and laying the groundwork for producing them. Mack said he hopes to produce 10 working prototype ventilators by this week.

That type of forward thinking is a trait Mack acquired while he was an undergraduate. He put together a project to build temporary homes using shipping containers. His current company, LAFORGE Optical, is expanding on the Google glass concept where prescription eyewear integrates smartphone notifications. He is an entrepreneur and also helps others become entrepreneurs by understanding that business success is more than making products, it is about credibility.

“I made it clear to people that the only way we can do this rapidly is to have credibility,” he said. “And the way we build credibility is to have great people who are passionate about this.”