RIT trustee gives $500,000 to Student Hall for Exploration and Development 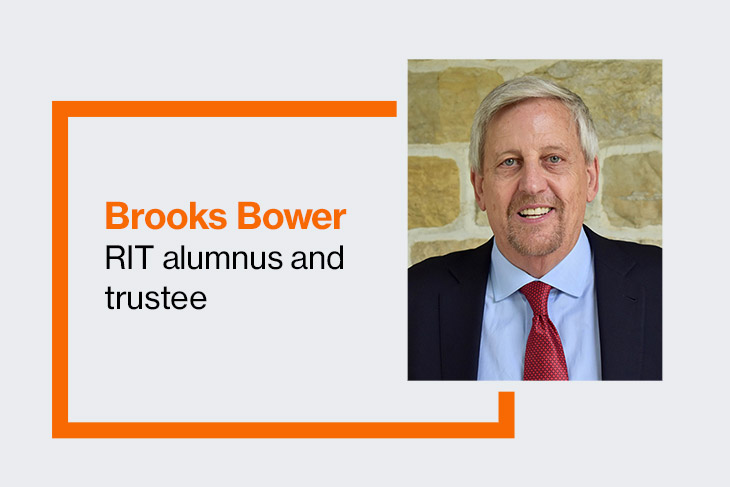 Rochester Institute of Technology alumnus and trustee Brooks Bower ’74 (printing) has made a gift to the multi-use complex under construction that will showcase the university as a place for technology, the arts, and design.

Bower has given $500,000 to RIT’s Student Hall for Exploration and Development (the SHED) to establish the Brooks H. Bower Maker Showcase.

Transforming RIT: The Campaign for Greatness, the largest fundraising effort in the university’s history, has surpassed a major milestone. The $1 billion campaign has exceeded the $900 million mark.

The SHED will transform the center of campus, and the Brooks H. Bower Maker Showcase will be at the heart of the new construction. On track to open in fall 2023, the SHED’s makerspace and project team spaces will provide students new opportunities for collaboration and tinkering.

“It’s going to be an iconic building for RIT,” said Bower, chairman and CEO of Papercone Corp., a specialty envelope manufacturer based in Louisville, Ky.

The makerspace in the SHED resonated with Bower, who values the hands-on education he gained at RIT’s School of Printing in the early 1970s. Bower, who grew up in San Francisco, moved across the country to attend one of the best printing schools at the time.

“Our labs were like makerspaces,” said Bower, who joined the RIT Board of Trustees in 2011. “We ran the printing machines and set type. It’s a craft I learned.”

Bower likes that the SHED will be open to all students who want to make things with their hands. The collaborative aspect is also enriching, he noted. “I think it’s great because it will bring together people from other majors.”

The SHED will cover more than 200,000 gross square feet of new construction and renovated spaces in Wallace Library and Monroe Hall. The complex will house a performing arts component that includes individual rehearsal spaces, a large dance instruction studio, and a music rehearsal studio. The Sklarsky Glass Box Theater will seat 180 in a space that can be reconfigured to allow for, or block, light, depending on the performance. The facility also will serve the campus with 27 classrooms in the SHED and Wallace, adding 1,500 classroom seats. Five of these interactive learning classrooms will seat 150 students each.

The gift is part of Transforming RIT: The Campaign for Greatness—RIT’s $1 billion university fundraising effort. This blended campaign seeks support from a variety of investors, including alumni and friends, government and corporate partners, and research foundations and agencies.

Bower has given more than $1.6 million to RIT and is a founding Sentinel Society member at the collaborators level. The new leadership annual giving program, named for the sculpture in front of the Student Alumni Union, is building a community of donors who annually invest $1,000 or more to RIT.

Bower won the Outstanding Alumnus of 2017 award for his ongoing commitment to the university, including helping the RIT Big Shot team secure Churchill Downs for its 2015 event and for his support of the Cary Graphic Arts Collection in the RIT Libraries.

When Bower was an RIT student in the early 1970s, the Cary Collection was housed in James E. Booth Hall, down the hall from the then School of Printing. Memories of visiting the rare book collection, coupled with his passion for printing history and craftsmanship, led to his $1 million donation that enabled the Cary Collection to purchase the historic Kelmscott/Goudy Hand Press in 2013 for $233,000. Melbert Cary, the namesake of RIT’s rare book collection, once owned the press. Other notable owners include American type designer Frederic Goudy and 19th century English designer William Morris.

A collector himself, Bower keeps 10 antique presses on his Louisville estate, including the sister to RIT’s Kelmscott/Gaudy. “When I have time, I enjoy tinkering,” he said.

Bower’s other philanthropic activities include sitting on the boards of the Envelope Manufactures Association and Foundation, Walden School, The Salvation Army Advisory Board, and the philanthropic organization the Honorable Order of Kentucky Colonels, which has raised $3.5 million for tornado victims in western Kentucky.