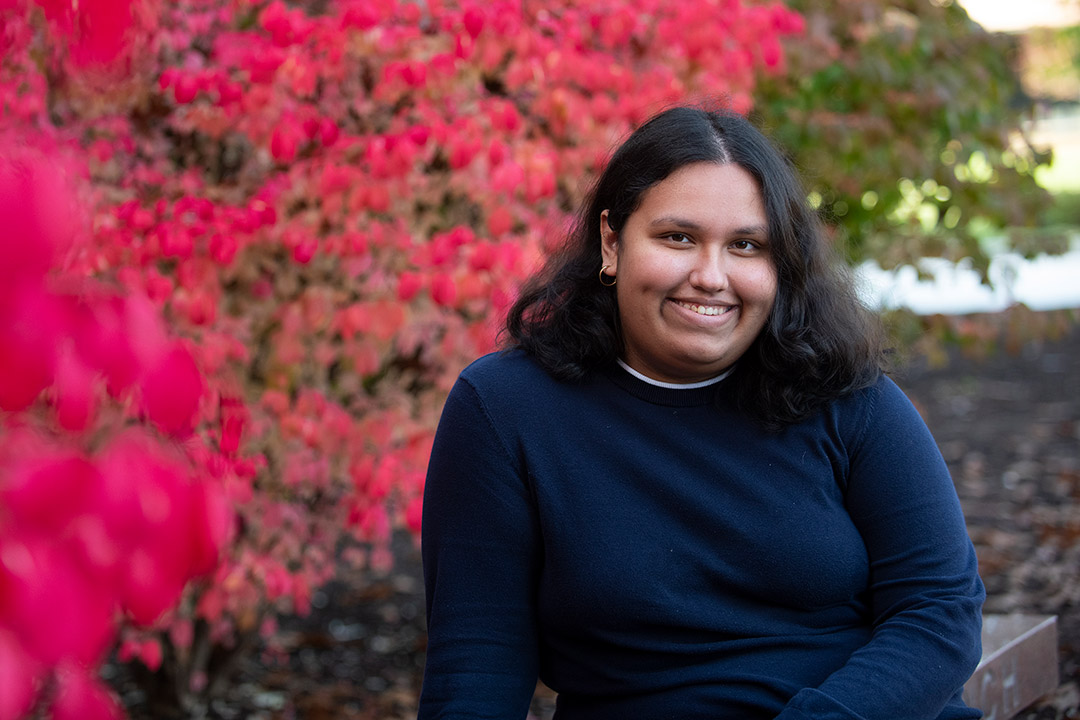 Nidhi Baindur is RIT’s second recipient of the Newman Civic Fellowship, which encourages civic-minded students to network with others to help with community issues.

Growing up in a family of teachers, Nidhi Baindur has valued education from a very young age.

Baindur, a second-year computational mathematics major from the island nation of Mauritius, is well on her way to helping others as just the second Rochester Institute of Technology recipient of the Newman Civic Fellowship, which recognizes and supports community-committed students who are change-makers and public problem solvers. Bakar Ali, now a visiting lecturer for business at RIT’s National Technical Institute for the Deaf, was the first RIT recipient in 2013 when he was a student.

The fellowship is available to students attending a college, such as RIT, that is affiliated with Campus Compact. Students are nominated by their president, provost, or chancellor on the basis of their potential for public leadership. The yearlong fellowship includes virtual learning opportunities and networking as part of a national network of engaged student leaders who can support one another in building transformational partnerships between campuses and communities.

Campus Compact is a national coalition of colleges and universities committed to the public purposes of higher education, aiming to build democracy through civic education and community development. It is the longest standing higher education civic engagement organization and, in addition to the Newman Civic Fellowship program, drives best practice around service learning, engaged scholarship, and related policies.

Baindur began helping others when she was in high school, coaching underprivileged children in Grades 1 through 6 one-on-one with math, French, and science after school.

“Tuition classes are a huge thing at home but also very expensive. Having the opportunity to teach was the best part of my entire life. I loved those kids,” she said.

In addition to teaching, Baindur and other volunteers also spread awareness about the importance of native plants found in Mauritius and encouraged the local population to grow them. Over several summer breaks, the group planted more than 40,000 mangroves in marshy land to help stop erosion.

Those experiences helped Baindur realize civic engagement was something she was interested in. It was also the first time she became aware of the societal barriers that prevented other students from receiving the opportunities she had.

“Now I feel that everything I do, I do it because I want to do it in my heart, not because I want it on my resume,” she said. “There is more of an impact if I do it from my heart. It’s amazing how in the smallest of ways you can make the biggest impact with someone.”

Baindur took her first year online at RIT due to the pandemic but still got involved as a content creator in the Division of Enrollment Management and as a College of Science ambassador.

“She has begun her RIT career with a motivation to succeed and transform lives,” said Ellen Granberg, RIT’s provost and senior vice president for Academic Affairs. “She has indicated her enthusiasm for engaging our local community while continuing to impact others through our rich global network.”

“I also like to cook food and just sit down and read, but I have not done it in a very long time,” she said.

And she’s been involved with Into the ROC, visiting attractions in Rochester with other students.

“The biggest thing is I want someone who can show me Rochester,” she said. “I don’t know the U.S. or the Rochester community, so I don’t know how I can help. My goal is to contribute to a world where quality education for all is a necessity and not a privilege. This is very important to me.”

Her fellowship normally holds an in-person national conference, focusing on skill development and professional learning, but it was held online this year due to the pandemic. Fellows also receive one-on-one leadership development with a local mentor.

Baindur has worked with mentors in RIT’s Center for Leadership and Civic Engagement, as well as with Dewey Lawrence, interim director of University Exploration.

“She’s self-motivated and willing to try different things out,” Lawrence said. “Even when she was halfway around the world, she would call with questions if she had them at all hours of the day. She’s very dedicated to her studies and is one of the more motivated and engaged students I’ve seen. I enjoy that curiosity that she brings, and she doesn’t care about hurdles. She sees a hurdle, and she keeps pushing and keeps asking questions until she finds out how to overcome it. She’s a great young woman.”