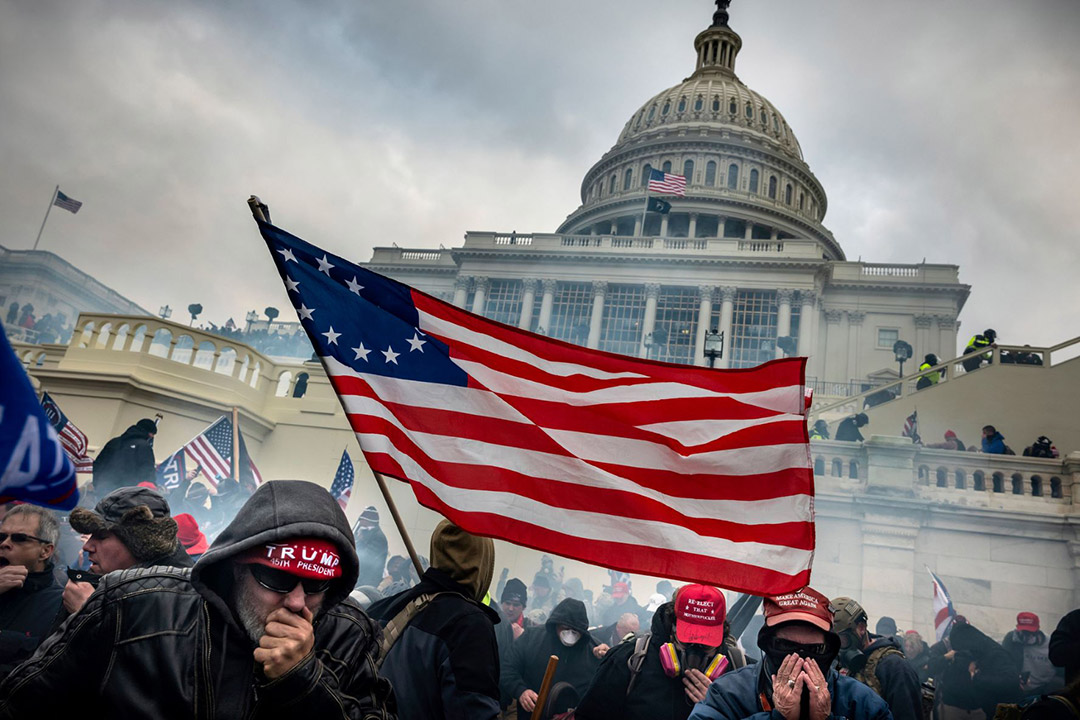 An image from ‘Brink,’ a book chronicling politics in the United States from the 2016 presidential election through the Jan. 6, 2021, insurrection

A solo exhibition of photographs and video by David Butow, whose new book, Brink, chronicles politics in the United States from the 2016 presidential election through the Jan. 6, 2021, insurrection, is coming to RIT’s City Art Space.

Opening Feb. 4, “Brink: Photographs by David Butow” features a gripping selection of images from the book (Punctum Press) for which Jenn Poggi, assistant professor in RIT’s School of Photographic Arts and Sciences, served as a key editor. The exhibition runs through Feb. 20.

Butow is a freelance photojournalist whose projects and assignments have taken him to more than two dozen countries, including Afghanistan, Burma, Iraq, Peru, Yemen, and Zimbabwe. Despite his decades of work covering the results of public policy, he had never photographed in the Capitol or the White House. In 2017, as Donald Trump took office, Butow felt compelled to move from California to Washington, D.C., to document the events up close.

“We lived through history minute by minute, so much so that the gravitas of what transpired is apparent only when one steps back and sees how the whole saga unfolded,” writes Butow, whose book was recently reviewed by The Washington Post.

“As revisionists seek to trivialize or downplay these events, it’s critical to maintain a record of just how close the presidency of Donald Trump brought U.S. democracy to the brink of dysfunction,” he adds.

According to Butow, while some of his photographs were taken on assignment, or published right away in The New Yorker, Vanity Fair, and TIME, “I was most interested in making pictures that would be different from daily news coverage and that would be particularly compelling to viewers decades from now.”

He noted that he and Poggi worked collaboratively to plan the exhibit “with the idea that it will be much more than a display and replication of what’s in the book.

“City Art Space is large and flexible and we decided to create a unique experience for the viewer,” Butow said. “One difference is that we’ll include a short, slow-motion video I made, which is mostly scenes from the U.S. Capitol and the White House. There’s no narration; it’s just a tone poem that complements and gives some texture to the still pictures in the exhibition.”

The space also provides the flexibility for some very large prints, Butow added, and because the narrative concludes with the Jan. 6 attack on the Capitol, “we're sort of forcing a viewer into a space to be confronted with practically life-size images that I hope will give a sense of my experience that day—very crowded, chaotic, and claustrophobic.”

For Poggi, a former White House photo editor before coming to RIT in 2013, editing photos spanning a five-year body of work—not to mention remotely during a pandemic—provided a number of unique and interesting challenges.

“David first sent me a wide working edit of files in October 2019,” Poggi recalled. “Over the next two months, I made an edit of images that really resonated with me.”

“We both recognized David would continue to make work through the inauguration, but Jan. 6 impacted how the book took shape in a significant way,” she added.

Last spring, the pair consulted with Olivier Picard, a picture editor with whom each had previously worked at U.S. News & World Report. Around the same time, Poggi connected Butow with Shelby Leeman ’12 (photographic sciences), who she had previously recruited to work in the White House Photo Office. Leeman, a digital imaging specialist, subsequently prepared all 104 files for the book before its printing in Italy.

Poggi said she was grateful that John Aäsp, gallery director for RIT’s College of Art and Design, was able to open up a slot for Butow’s exhibition, especially given the space’s scheduling and other logistical changes wrought by the pandemic. She’s looking forward to the public experiencing Butow’s important work.

“In many ways, it's been a whole new project curating the exhibition,” Poggi said. “While the themes are the same in the book and the exhibit, there will only be 29 images displayed at City Art Space. I didn't want the two experiences to feel redundant.”

“It was important to have people see the exhibit and then be able to pick up the book and continue to find new images that add more nuance to the conversation,” she concluded.