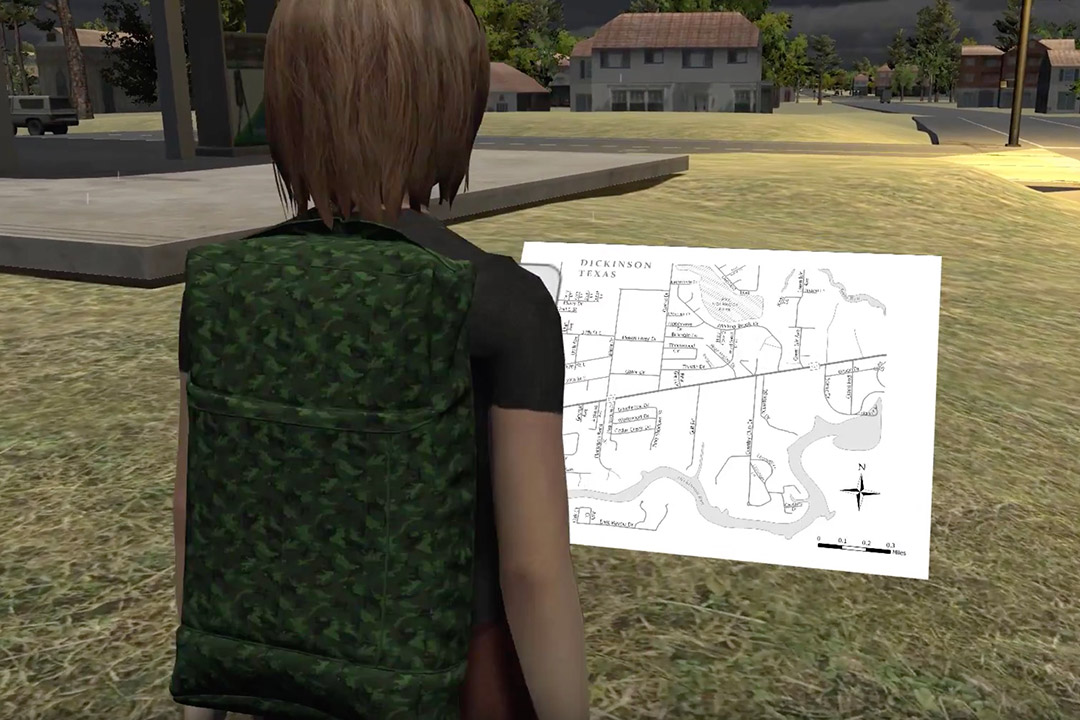 Situations such as the coronavirus pandemic have heightened interest in the importance of disaster management and mitigation. At Rochester Institute of Technology, researchers have created two new serious games that could be used as important learning tools for solving these world problems.

A group of RIT professors, students and National Science Foundation-funded college students from across the country have developed serious geographic information systems (GIS) games for disaster resilience research. The games aim to teach general audiences, emergency managers and first responders about spatial thinking skills and how they can help communities withstand and recover from disasters.

“There is a lack of spatial thinking in the emergency practice right now, even though it can be really useful for identifying vulnerable populations, moving people to safe locations and learning about how disasters impact areas,” said Brian Tomaszewski, lab director of RIT’s Center for Geographic Information Science and Technology who led the projects. “I think using gamification to make learning spatial thinking more engaging is a great way to get people thinking.”

The games, called Project Lily Pad and Project Emergency Operations Center (EOC), are both based on Hurricane Harvey, a Category 4 storm that hit Texas on Aug. 25, 2017. Harvey caused catastrophic flooding, many deaths and $125 billion in damage, according to the National Hurricane Center.

Research for the games began during two NSF-funded Research Experience for Undergraduates (REU) sites in Geographic Information Systems (GIS) for Disaster Resilience Spatial Thinking, hosted at RIT in summer 2018 and 2019. The REUs were led by Tomaszewski, who is also an associate professor in RIT’s School of Interactive Games and Media (IGM).

The 15 students in the REU investigated maps, data and survivor testimony to better understand the disaster. By combining elevation models and flood data, the group was able to create accurate 3D city models to use in the games. The groups used GIS data from OpenStreetMap, along with ArcGIS tools to create their interactive maps.

In Project Lily Pad, players take on the role of a first responder in Dickinson, Texas. On day one, players use a paper map to drop-off supplies and navigate unfamiliar territory. Tomaszewski explained that during Hurricane Harvey, many of the National Guard members called in were new to the area, possibly making it harder to navigate.

On day two, the player’s avatar is an informal volunteer from adjacent areas who helps with search and rescue efforts using a boat. Players must rescue people and drop them off at higher-elevation safe havens equipped with resources, that are known as “Lily Pads.”

“While responders are waiting to deploy at a disaster zone, they could play a game like this to familiarize themselves with the local environment,” said Tomaszewski. “It’s also useful for any audience, as it teaches spatial thinking skills with respect to flooding and hurricanes.”

In the Project Emergency Operations Center (EOC) game, players take on the role of an EOC manager in Galveston, Texas. As different disaster scenarios take effect, the player must make resource management decisions to control the situation, including the deployment of ambulances, police and firefighters.

In 2018 and 2019, some members of the REU group traveled to Galveston to collect field data that could be used in the game.

“We learned that this game could be a really useful supplement for the table top exercises that many EOC’s do,” said Tomaszewski. “Having a virtual game could be more scalable, cost effective and flexible for all of the people that are involved with these exercises.”

With help from six RIT game design and development co-op students and David Schwartz, director of IGM at RIT, the geospatial data came to life as immersive games.

Jeshua Johnson, a University of Texas, Austin student who participated in the REU at RIT, helped to turn geospatial data into a 3D game environment using CityEngine. The process involved modeling of the terrain and buildings, as well as locating areas of interest for the game events, including the flood reports.

“Not many games are made with research as the focus,” said Johnson. “Project EOC is an opportunity to approach games from a different perspective that has the potential to really benefit society.”

Both open source games were eventually made using the Unity game engine.

“I was brought on to work on the underlying systems that controlled gameplay, such as triggering disasters and tracking progress behind the scenes,” said Alexander Amling, a third-year game design and development student at RIT from Columbus, Ohio. “I really enjoyed working on a research-driven, practical project alongside researchers with backgrounds that were very different from my own. I found the entire experience to be a great way to explore the more academic side of software development.”

Project Lily Pad and Project EOC are free to play and can be downloaded on GitHub.